Use of Technology and Social Media in Preaching - Assignment Example

Comments (1)
Add to wishlist Delete from wishlist
Cite this document
Summary
Preaching can be defined as the concerted engagement of an individual’s faculties of mind, body and spirit. It can therefore be categorically termed as a skilled activity. However, preaching has to do with a specific content, a particular message conveyed…
Download full paper File format: .doc, available for editing
HIDE THIS PAPERGRAB THE BEST PAPER93.4% of users find it useful 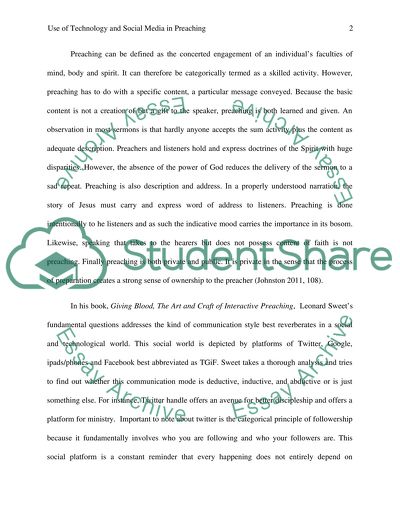 Extract of sample "Use of Technology and Social Media in Preaching"

Preachers and listeners hold and express doctrines of the Spirit with huge disparities. However, the absence of the power of God reduces the delivery of the sermon to a sad repeat. Preaching is also description and address. In a properly understood narration, the story of Jesus must carry and express word of address to listeners. Preaching is done intentionally to he listeners and as such the indicative mood carries the importance in its bosom. Likewise, speaking that takes to the hearers but does not possess content of faith is not preaching. Finally preaching is both private and public. It is private in the sense that the process of preparation creates a strong sense of ownership to the preacher (Johnston 2011, 108). In his book, Giving Blood, The Art and Craft of Interactive Preaching, Leonard Sweet’s fundamental questions addresses the kind of communication style best reverberates in a social and technological world. This social world is depicted by platforms of Twitter, Google, ipads/phones and Facebook best abbreviated as TGiF. Sweet takes a thorough analysis and tries to find out whether this communication mode is deductive, inductive, and abductive or is just something else. For instance, Twitter handle offers an avenue for better discipleship and offers a platform for ministry. Important to note about twitter is the categorical principle of followership because it fundamentally involves who you are following and who your followers are. This social platform is a constant reminder that every happening does not entirely depend on leadership but rather on followership. Followership involves two orientations namely: who am I following and who is following me. Just like apostle Paul said, “Follow me as I follow Christ”, twitter provides an avenue where one constantly reframes himself. This reframing is especially geared towards conforming to acts performed by Jesus including being gracious, forgiving, loving and acting as a discipler who helps his flock (Sweet 2008, 157). Social platforms offer great quotes that have an impact on a multitude of crowds. An analogy is depicted that if one is unable to say a statement in everyday’s words, then probably he or she does not comprehend it. As such, the platforms provide unique channels where one is able to eloquently state the message that reaches out. The gospel is expressed with immediacy and terseness on a number of teachings that Christ advocated or. Social network sites basically involve the simple stuff every common human being is able to connect with even at personal levels. Social media offers a common ground for global undertakings throughout the world and even in churches and parishes across the world. Through the social media, questions on whether the listeners or partakers of the message connect with the global community are addressed. Additionally, under common global concern, the listeners of the messages are encouraged to act as mirrors to others and lead by example. It is also through the social sites that a preacher may find social solitude. By this a preacher is shut off his undertakings while simultaneously giving back to the society without hiding. Therefore, Sweet advocates for the use of social media in preaching and this is in tandem with the above mentioned reasons (Sweet 2008, 136). Another great piece of work by Leonard Sweet is the book Viral: How Social Networking Is Poised to Ignite Revival by Leonard Sweet. This book equally plays a fundamental role in addressing the role ...Download file to see next pages Read More
Share:
Tags
Cite this document
(“Use of Technology and Social Media in Preaching Assignment”, n.d.)
Retrieved de https://studentshare.org/religion-and-theology/1470788-use-of-technology-and-social-media-in-preaching

(Use of Technology and Social Media in Preaching Assignment)
https://studentshare.org/religion-and-theology/1470788-use-of-technology-and-social-media-in-preaching.

“Use of Technology and Social Media in Preaching Assignment”, n.d. https://studentshare.org/religion-and-theology/1470788-use-of-technology-and-social-media-in-preaching.
Comments (1)
Click to create a comment or rate a document

et
eturcotte added comment 9 months ago
Student rated this paper as
This document saved me today. I liked the structure. It was very useful for my religion and theology course.

To instigate one to a category can now just as easily break out into a full-on discussion that may exhaust time and brain cells and yet still remain undefined.
In so much so that censorship and other restrictions, imposed by governments, critiques, audiences and other artists may condone a certain message of restraint that could bring about a new sense or in some cases lack thereof of artistic freedom. It is no longer a matter of identifying the genre and then moving along with the idea. Today’s global world will continue to embark and expand to involve all who are part of this world to be within the grasp of criticism or acclaim.
This categorizing and boxing up is now becoming obsolete as more and more works show...
9 Pages (2250 words) Coursework

Erving Goffman was an astute observer of society, who immersed himself in the social environment which he was studying. He carefully observed and recorded the ways in which people’s behavior and interpersonal interactions are carried out in everyday life. He notes that “people perform their social roles and, as they do so, they produce social order through their actions and the regu...
6 Pages (1500 words) Article
sponsored ads
Save Your Time for More Important Things
Let us write or edit the assignment on your topic "Use of Technology and Social Media in Preaching" with a personal 20% discount.
GRAB THE BEST PAPER

Let us find you another Assignment on topic Use of Technology and Social Media in Preaching for FREE!