Comments (0)
Add to wishlist Delete from wishlist
Cite this document
Summary
Comparative approach to religious studies is of greater importance when it comes to understanding religious matters. This is even more compounded by the fact that we are living in a globalized world where unity, brotherhood and cross-cultural practices are the order of the day. …
Download full paper File format: .doc, available for editing
HIDE THIS PAPERGRAB THE BEST PAPER98.8% of users find it useful 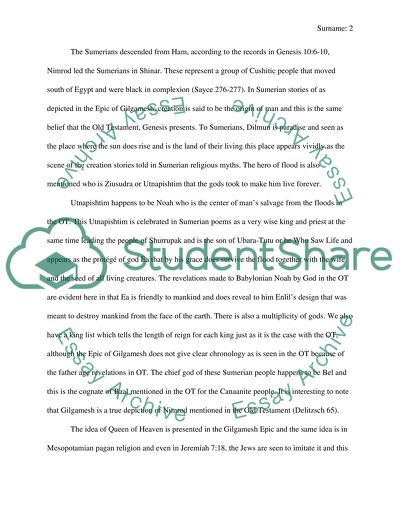 Extract of sample "Comparison of Religious Writings and Practices"

Download file to see previous pages A comparative study of religious literature and religion itself might just be more beneficial to people towards pleasing God (Taylor 23-98). This paper takes a keen look at the resemblances found between Sumerian Epic of Gilgamesh, the Codes of Hammurabi, the doctrines of the Koran and the doctrines of the Old and New Testament with a view on establishing how they could have evolved from one ancient common cultural memory. The confrontation of races considered alien and diverse did not always turn out the causes of war, but it occurred that this was often the opportunity and condition for psychical conflict that is even still being experienced today (Peters 92).
The origin of the Old Testament could be considered as a natural development that resulted out of the Babylonian religion (Rogers 107). This could be seen from the examination of certain religious practices and concepts such as the world’s origin, the fall of man, the flood, and life after death, demons, the devil, angels, the Sabbath, sacrificial cult, priesthood, names and worship of God, and the monotheistic notion of deity. The concept of deity is fundamental to all religious writings and thinking (International Bible Society).
The Sumerians descended from Ham, according to the records in Genesis 10:6-10, Nimrod led the Sumerians in Shinar. These represent a group of Cushitic people that moved south of Egypt and were black in complexion (Sayce 276-277). In Sumerian stories of as depicted in the Epic of Gilgamesh, creation is said to be the origin of man and this is the same belief that the Old Testament, Genesis presents. To Sumerians, Dilmun is paradise and seen as the place where the sun does rise and is the land of their living this place appears vividly as the scene of the creation stories told in Sumerian religious myths. The hero of flood is also mentioned who is Ziusudra or Utnapishtim that the gods took to make him live forever. Utnapishtim happens to be Noah who is the center of man’s salvage from the floods in the OT. This Utnapishtim is celebrated in Sumerian poems as a very wise king and priest at the same time leading the people of Shurrupak and is the son of Ubara-Tutu or he Who Saw Life and appears as the protege of god Ea that by his grace does survive the flood together with the wife and the seed of all living creatures. The revelations made to Babylonian Noah by God in the OT are evident here in that Ea is friendly to mankind and does reveal to him Enlil’s design that was meant to destroy mankind from the face of the earth. There is also a multiplicity of gods. We also have a king list which tells the length of reign for each king just as it is the case with the OT, although the Epic of Gilgamesh does not give clear chronology as is seen in the OT because of the father age revelations in OT. The chief god of these Sumerian people happens to be Bel and this is the cognate of Baal mentioned in the OT for the Canaanite people. It is interesting to note that Gilgamesh is a true depiction of Nimrod mentioned in the Old Testament (Delitzsch 65). The idea of Queen of Heaven is presented in the Gilgamesh Epic and the same idea is in Mesopotamian pagan religion and even in Jeremiah 7:18, the Jews are seen to imitate it and this annoys God. Even in catholic worship, Mary is seen as the Queen of Heaven. Tower of babel is also eminent. An interesting ...Download file to see next pages Read More
Share:
Tags
Cite this document
(“Comparison of Religious Writings and Practices Term Paper”, n.d.)
Retrieved from https://studentshare.org/religion-and-theology/1432739-please-choose-the-topic-u-feel-fits-the-paper

“Comparison of Religious Writings and Practices Term Paper”, n.d. https://studentshare.org/religion-and-theology/1432739-please-choose-the-topic-u-feel-fits-the-paper.
Comments (0)
Click to create a comment or rate a document

CHECK THESE SAMPLES OF Comparison of Religious Writings and Practices

When trying to locate the property loss because of a transfer made under a breach of trust, there are certain issues that need to be taken into account. At the first level, the remedies available by the relevant legal texts tend to differentiate not only regarding their requirements but also their level of protection provided. On the other hand, the application of the rules of common law instead of the ones of equity has to be considered thoroughly and the party that suffered the damage has to evaluate all the parameters regarding his choice as each of the above legal paths has its own advantages. From a general point of view, it has been stated that ‘a person who confers a benefit, normally a money payment, under a mistake,...
12 Pages (3000 words) Case Study

Following the breakdown of monastic institutions and scholasticism in late medieval Europe and the failure of conciliar reform, the sixteenth century saw the fermenting of a great cultural debate about religious reforms and later about fundamental religious values. The failure of the conciliar movement led to the Protestant Reformation in the European West. (Wikipedia, the online encyclopedia). Writers of the seventeenth century harvested the fruits of the religious revolution and the bitter religious conflicts of the sixteenth century. It is, in fact, difficult to consider much of the literature of the time apart from its religious implications. In some of the works of this time, there is an aura of struggle and a self-inflicted...
11 Pages (2750 words) Case Study

His growing up years did not sound very appealing. He became involved in drug dealing, gambling, robbery, burglary, racketeering, steering prostitutes and carrying firearms in which he got imprisoned. In his prison cell, he denounced the bible and started the onsets of his connection with the Nation of Islam through his brother. He then maintained a connection with its leader, Elijah Muhammad. When he was finally released, he immediately joined the Nation of Islam, spread the Islamic teachings and became Malcolm X, symbolizing the rejection of ‘slaves names’ and the absence of an inherited African name. He soon became the minister of the Nation of Islam’s Temple Number Eleven after staying in Chicago with Elijah...
7 Pages (1750 words) Assignment

Austria or you may call is the Republic of Austria in official terminology is located in Central Europe. Although the population figures do not touch the danger limit but the talent and resources are worthwhile there. Germany and Hungry are also near this region. Italy is in the south of Austria. Switzerland will be seen in the west. So, now you can realize the importance of this region clearly.
The GDP is also impressive here. You can say the economy is strong and it has much depth. The strong social market economy is the result of development and proper management by the government (DArt & Turner 2008). Traders find flexibility in business operations. Labor has a positive approach to work and jobs.
There was a tren...
9 Pages (2250 words) Term Paper
sponsored ads
Save Your Time for More Important Things
Let us write or edit the term paper on your topic "Comparison of Religious Writings and Practices" with a personal 20% discount.
GRAB THE BEST PAPER

Let us find you another Term Paper on topic Comparison of Religious Writings and Practices for FREE!