Comments (0)
Add to wishlistDelete from wishlist
Cite this document
Summary
Christian Perspectives on Euthanasia and Physician Assisted Suicides.
Euthanasia has been around for thousands of years, although it used to be perfectly acceptable. The ancient Greeks and Romans condoned the practice, and actually celebrated it…
Download full paperFile format: .doc, available for editing
HIDE THIS PAPERGRAB THE BEST PAPER91.8% of users find it useful 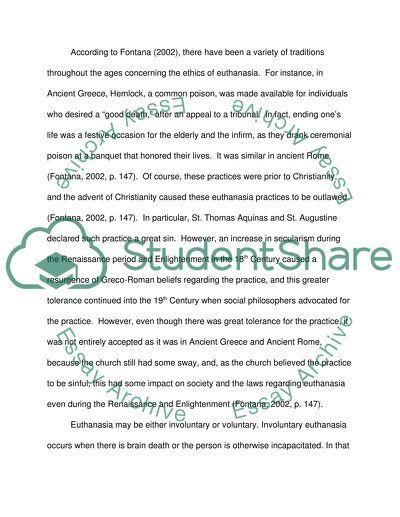 Download file to see previous pages Since then, the ethics of the practice has evolved, and so have the reasons for proscription. Nowadays, the proscription is based more upon practical concerns then scriptural ones – concerns such as the introduction of a slippery slope; the possibility that the person might be cured and miss his or her chance for this cure; and the need to create a culture of life that values everybody in society, even the infirm and terminally ill. Still, the belief remains that God has sovereignty over life and death, and man cannot usurp this. St. Thomas Aquinas was one of the first religious figures to advocate this, and the traditional Christian proscription for the practice has been based upon this ever since. Although some individual Christians may take issue with the official church teachings on the subject, for a variety of reasons, in the end the practice should be banned because of the practical concerns listed above. Discussion According to Fontana (2002), there have been a variety of traditions throughout the ages concerning the ethics of euthanasia. For instance, in Ancient Greece, Hemlock, a common poison, was made available for individuals who desired a “good death,” after an appeal to a tribunal. In fact, ending one’s life was a festive occasion for the elderly and the infirm, as they drank ceremonial poison at a banquet that honored their lives. It was similar in ancient Rome (Fontana, 2002, p. 147). Of course, these practices were prior to Christianity, and the advent of Christianity caused these euthanasia practices to be outlawed (Fontana, 2002, p. 147). In particular, St. Thomas Aquinas and St. Augustine declared such practice a great sin. However, an increase in secularism during the Renaissance period and Enlightenment in the 18th Century caused a resurgence of Greco-Roman beliefs regarding the practice, and this greater tolerance continued into the 19th Century when social philosophers advocated for the practice. However, even though there was great tolerance for the practice, it was not entirely accepted as it was in Ancient Greece and Ancient Rome, because the church still had some sway, and, as the church believed the practice to be sinful, this had some impact on society and the laws regarding euthanasia even during the Renaissance and Enlightenment (Fontana, 2002, p. 147). Euthanasia may be either involuntary or voluntary. Involuntary euthanasia occurs when there is brain death or the person is otherwise incapacitated. In that case, especially if there is some kind of directive from the person, in that he or she signed a living will or a “Do Not Resuscitate” order, then that person will be allowed to die. Voluntary euthanasia, however, is more active and involved, therefore more controversial. Voluntary euthanasia is when an individual who is of clear mind chooses to end his or her life with assistance (Nayernouri, 2011, p. 54). Nayernouri (2011) further delineates the practice of euthanasia from suicide. As she explains, suicide is an act that one takes by oneself, without assistance, and this is not as controversial as euthanasia as the act of suicide is presumably one’s right, although the world’s religions, including Christianity, Islam and Judaism view this act to be one of great sin (Nayernouri, 2011, p. 54). The secular rationale against euthanasia are that the patient may be treated therapeutically for depression or pain, which are the major reasons why individuals choose euthanasia. It is for this reason that the American Medical Association (AMA) has come out against the practice. The AMA’s stance on euthanasia is inconsistent with its other stances which conflict with the traditional pro-life views regarding abortion and ...Download file to see next pagesRead More
Share:
Tags
Cite this document
(“Christian Perspectives on Euthanasia and Physician Assisted Suicides Research Paper”, n.d.)
Retrieved from https://studentshare.org/religion-and-theology/1392950-what-are-christian-perspectives-on-euthanasia-and
(Christian Perspectives on Euthanasia and Physician Assisted Suicides Research Paper)
https://studentshare.org/religion-and-theology/1392950-what-are-christian-perspectives-on-euthanasia-and.
“Christian Perspectives on Euthanasia and Physician Assisted Suicides Research Paper”, n.d. https://studentshare.org/religion-and-theology/1392950-what-are-christian-perspectives-on-euthanasia-and.
Comments (0)
Click to create a comment or rate a document

The Christian Foundations of a Secular Nation

America is a nation that was founded by Christians even though the present shape is secular. However, a study of the history of the forming of the constitution suggests that the founding fathers wanted to have a Christian nation. Yet at the same time, I do not think that they would be disappointed by the shape of the nation as it stands. On the other hand, they might be disappointed by how the presidency has become little more than a punch line for late-night shows.

From a cursory look at the constitution, a person may be tempted to say that it is entirely secular and makes clear divisions between church and state and has no mention of Christianity or religion whatsoever. However, a deeper analysis of the question shows...
7 Pages(1750 words)Term Paper

A history of anti-Semitism and it is a prevalent belief in Christendom that the Jews, as the murderers of Christ, deserve all possible sufferings is the reason that Hitler's massacre of the Jews was met with silent acceptance from the vast majority of his subjects. The continued anti-Semitic feelings of the Church stem from Christian teachings based on interpretations of the New Testament that have also contributed to the Holocaust and the persecution of Jews in Europe over the centuries.
In 1814, Jews in the Papal States were locked into cramped ghettos at night, were forbidden to practice law or medicine, to hold public office or to hire Christian servants. Meanwhile, elsewhere in Europe, Jews were increasingly free to live...
11 Pages(2750 words)Assignment

Heresy was the term used to characterize those groups of religious sects that challenged in some way or another, the ideology that came to be accepted at orthodox Christianity. While many of the heretic groups differed in their beliefs and norms they were united by a common notion that the Church did not represent their particular values and beliefs. They were predisposed to reject and isolate themselves from the Church and its one-dimensional views of Christianity. The Church, in turn, viewed these detractors as heretics and rejected them, isolating them and persecuting them for th...
11 Pages(2750 words)Report

It is quite common in society to find a child abusive family, sibling abuse, dating abuse, parent abuse and even spouse abuse. Therefore, the question about violent behavior in the family can be difficult to answer. First, it would be quite important to identify what constitutes family violence. In as much as the definitional consensus might be achieved, the fact remains that acts of family violence mostly happen behind closed doors which means that the activities remain hidden sometimes, ignored or hidden. Violent behaviors among most families will mean poor upbringing of its members and in this case, the children in the family. The family remains an important source for the growth of the children in society therefore; whatever h...
7 Pages(1750 words)Assignment

...Liberal and Marxist perspectives on International Politics Liberalism approach to international politicsholds the view that the application of reason and universal ethics to international relations can lead to a more orderly, just and cooperative world since nations are not always on the verge of war. Marxist view on the other hand rejects the liberal view on state cooperation and focuses mainly on the economic aspect where it uses mainly materialistic interpretation of historical development in its beliefs. Karl Marx and Friedrich Engels inspired it in the 19th century and ever since it has inspired several political ideologies and social movements which have been witnessed in the past. Both liberal and Marxist perspectives...
7 Pages(1750 words)Assignment
sponsored ads
Save Your Time for More Important Things
Let us write or edit the research paper on your topic "Christian Perspectives on Euthanasia and Physician Assisted Suicides" with a personal 20% discount.
GRAB THE BEST PAPER

Let us find you another Research Paper on topic Christian Perspectives on Euthanasia and Physician Assisted Suicides for FREE!