Comments (0)
Add to wishlistDelete from wishlist
Cite this document
Summary
Therefore, when a part of the body is harmed ‎and needs to be fixed, it would be difficult to administer a drug that would only affect the…
Download full paperFile format: .doc, available for editing
HIDE THIS PAPERGRAB THE BEST PAPER92.9% of users find it useful 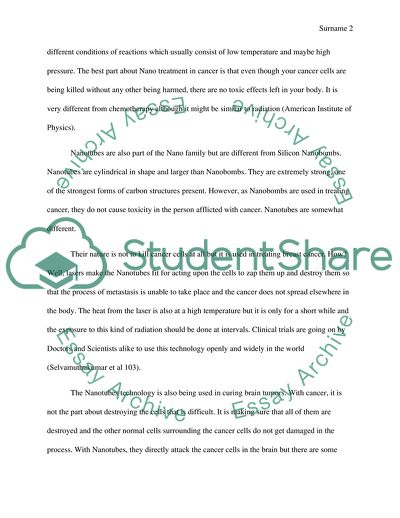 Download file to see previous pages ‎
The Nano technology is fast developing in cancer treatment. It is difficult to kill the ‎cancer cells in the body because they are surrounded by normal functioning cells which shouldn’t ‎be harmed. Silicon Nanobombs were made to fight this war on cancer. They have successfully ‎been used against killing breast cancer cells as well as tumors. A type of Nanobomb, called the ‎porous silicon Nanobomb, has also been used to kill cancer cells without killing normal cells. ‎They are generated by an NIR light (Wake Forest Baptist Medical Center).‎
Nanoparticles are very specific in nature, sort of like enzymes. However, they release ‎enzymes, proteins and sometimes antibodies to fight against their specificity. They also require ‎different conditions of reactions which usually consist of low temperature and maybe high ‎pressure. The best part about Nano treatment in cancer is that even though your cancer cells are ‎being killed without any other being harmed, there are no toxic effects left in your body. It is ‎very different from chemotherapy although it might be similar to radiation (American Institute of Physics). ‎
Nanotubes are also part of the Nano family but are different from Silicon Nanobombs. ‎Nanotubes are cylindrical in shape and larger than Nanobombs. They are extremely strong, one of ‎the strongest forms of carbon structures present. However, as Nanobombs are used in treating ‎cancer, they do not cause toxicity in the person afflicted with cancer. Nanotubes are somewhat ‎different.
Their nature is not to kill cancer cells at all but it is used in treating breast cancer. How? ‎Well, lasers make the Nanotubes fit for acting upon the cells to zap them up and destroy them so ‎that the process of metastasis is unable to take place and the cancer does not spread elsewhere in ‎the body. The heat from the laser is also at a ...Download file to see next pagesRead More
Share:
Cite this document
(Nano in treating cancer Research Paper Example | Topics and Well Written Essays - 1500 words, n.d.)
Nano in treating cancer Research Paper Example | Topics and Well Written Essays - 1500 words. Retrieved from https://studentshare.org/physics/1783288-nano-in-treating-cancer

“Nano in Treating Cancer Research Paper Example | Topics and Well Written Essays - 1500 Words”. https://studentshare.org/physics/1783288-nano-in-treating-cancer.
Comments (0)
Click to create a comment or rate a document
sponsored ads
Save Your Time for More Important Things
Let us write or edit the research paper on your topic "Nano in treating cancer" with a personal 20% discount.
GRAB THE BEST PAPER

Let us find you another Research Paper on topic Nano in treating cancer for FREE!