Why I want to study fashion design - Essay Example

Comments (1)
Add to wishlistDelete from wishlist
Cite this document
Summary
I am a highly driven person with a passion for experimenting with color and textile. Since I have stepped into my teens, I have been designing my own clothes and that of my friends and relatives. …
Download full paperFile format: .doc, available for editing
HIDE THIS PAPERGRAB THE BEST PAPER98.4% of users find it useful 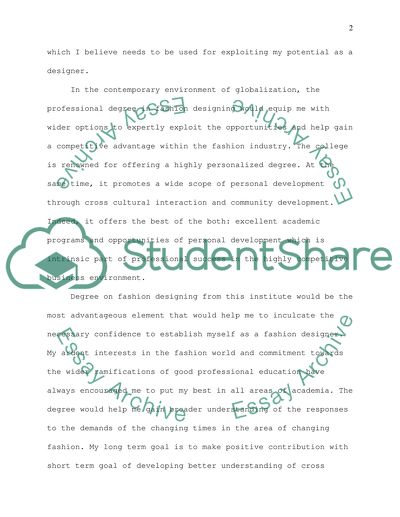 Extract of sample "Why I want to study fashion design"

I am a highly driven person with a passion for experimenting with color and textile. Since I have stepped into my teens, I have been designing my own clothes and that of my friends and relatives. People and acquaintances have been really appreciative of my creative designs and been a constant source of encouragement for me to take up fashion designing on a professional level. This is one area that really helps me to exploit my creative urges and gives a huge satisfaction when my designs are liked by people. I have therefore decided to go for professional degree in fashion designing so that I could further explore the intricacy of the business. I believe that the degree from this college would help me to grow not only as a person but also as a professional who would be able to meet the challenges of the contemporary world. My family and friends have been the major motivating force. My passion of ethnic design and use of fusion technique in my design is my strongest point. As a child I was much enamored with the fashion magazines which use to showcase the clothes of leading fashion designers of Milan and Paris. As I grew up, I realized that while I am fascinated with the contemporary fashion designers, I am equally amazed at the variety of ethnic designs across the culture, color and nationality. The multicultural society therefore has been a very vital part of my creativity which I believe needs to be used for exploiting my potential as a designer. In the contemporary environment of globalization, the professional degree in fashion designing would equip me with wider options to expertly exploit the opportunities and help gain a competitive advantage within the fashion industry. The college is renowned for offering a highly personalized degree. At the same time, it promotes a wide scope of personal development through cross cultural interaction and community development. Indeed, it offers the best of the both: excellent academic programs and opportunities of personal development which is intrinsic part of professional success in the highly competitive business environment. Degree on fashion designing from this institute would be the most advantageous element that would help me to inculcate the necessary confidence to establish myself as a fashion designer. My ardent interests in the fashion world and commitment towards the wider ramifications of good professional education have always encouraged me to put my best in all areas of academia. The degree would help me gain broader understanding of the responses to the demands of the changing times in the area of changing fashion. My long term goal is to make positive contribution with short term goal of developing better understanding of cross cultural values so that I am better able to use new techniques within my designs. This would not only help me to grow professionally but also preserve ethnic culture, design and art. I therefore, believe that my degree would greatly help me to apply the informed choices in the manner that befits the needs of the fashion industry. Read More
Share:
Tags
Cite this document
(“Why I want to study fashion design Essay Example | Topics and Well Written Essays - 500 words”, n.d.)
Retrieved from https://studentshare.org/other/1409852-why-i-want-to-study-fashion-design
(Why I Want to Study Fashion Design Essay Example | Topics and Well Written Essays - 500 Words)
https://studentshare.org/other/1409852-why-i-want-to-study-fashion-design.
“Why I Want to Study Fashion Design Essay Example | Topics and Well Written Essays - 500 Words”, n.d. https://studentshare.org/other/1409852-why-i-want-to-study-fashion-design.
Comments (1)
Click to create a comment or rate a document

ff
ffunk added comment 10 months ago
Student rated this paper as
This essay was always my weak point. I could never finish it successfully. Still, after I found this particular document, I understood how it should be completed. So, I performed my research afterward and completed the essay in several hours, instead of weeks as it was previously.

CHECK THESE SAMPLES OF Why I want to study fashion design

The authors, however, have made several philosophical assumptions even before the actual study began. These assumptions have bearing on the entire research because they guided the studies thesis, the method of investigation and the way the researchers interpreted the collected data.
Referring to previous works, Schommer-Aikins and Hutter embarked on several bouts of theorizing regarding the nature of knowledge and how people learn about issues that they face every day. Citing the body of literature, for example, on epistemological beliefs, the authors assumed that "individuals’ beliefs about the nature of knowledge and learning are linked to their comprehension, metal comprehension, interpretation of information, and pe...
6 Pages(1500 words)Case Study
sponsored ads
Save Your Time for More Important Things
Let us write or edit the essay on your topic "Why I want to study fashion design" with a personal 20% discount.
GRAB THE BEST PAPER

Let us find you another Essay on topic Why I want to study fashion design for FREE!