Comments (0)
Add to wishlistDelete from wishlist
Cite this document
Summary
Over the counter drugs reduced the symptoms temporarily, but they recurred after completion of the dose.
Past medical history: The patient has had three cases of urinary tract…
Download full paperFile format: .doc, available for editing
HIDE THIS PAPERGRAB THE BEST PAPER97.5% of users find it useful 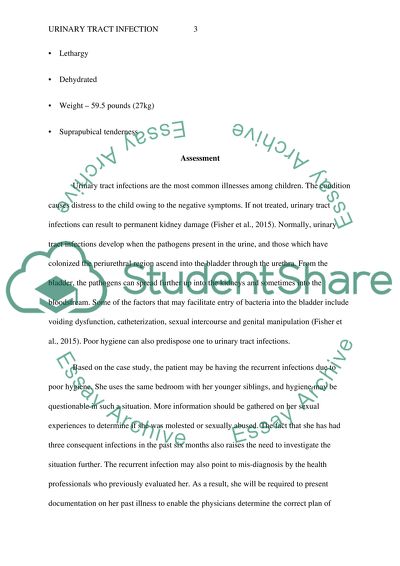 Pediatric Urinary Tract Infection due: ive Data Chief complaint: The patient wasadmitted to the hospital with complaints of abdominal pains. She also reports frequent vomiting, polyuria, and bladder incontinence.
History of present illness: The child developed a fever one week ago and is lethargic ever since. Over the counter drugs reduced the symptoms temporarily, but they recurred after completion of the dose.
Past medical history: The patient has had three cases of urinary tract infections in the past six months. She was treated in all cases, but the infection recurs shortly after completion of the prescription.
Family history: Other family members have no history of recurrent urinary tract infections.
Current medication: The child is receiving 400mg of acetaminophen tablets after every six hours to control the fever.
Immunizations: The child is fully immunized.
Social history: The child comes from a family of six. She shares the bedroom with her three siblings who are younger than her.
Review of systems: Genitourinary as per the patient include pain around the suprapubic region and increased frequency of urination. Gastrointestinal symptoms reported by the patient include vomiting and loss of appetite.
Objective Data
• Temperature – 39 degrees Celsius
• Lethargy
• Dehydrated
• Weight – 59.5 pounds (27kg)
• Suprapubical tenderness
Assessment
Urinary tract infections are the most common illnesses among children. The condition causes distress to the child owing to the negative symptoms. If not treated, urinary tract infections can result to permanent kidney damage (Fisher et al., 2015). Normally, urinary tract infections develop when the pathogens present in the urine, and those which have colonized the periurethral region ascend into the bladder through the urethra. From the bladder, the pathogens can spread further up into the kidneys and sometimes into the bloodstream. Some of the factors that may facilitate entry of bacteria into the bladder include voiding dysfunction, catheterization, sexual intercourse and genital manipulation (Fisher et al., 2015). Poor hygiene can also predispose one to urinary tract infections.
Based on the case study, the patient may be having the recurrent infections due to poor hygiene. She uses the same bedroom with her younger siblings, and hygiene may be questionable in such a situation. More information should be gathered on her sexual experiences to determine if she was molested or sexually abused. The fact that she has had three consequent infections in the past six months also raises the need to investigate the situation further. The recurrent infection may also point to mis-diagnosis by the health professionals who previously evaluated her. As a result, she will be required to present documentation on her past illness to enable the physicians determine the correct plan of action. Also, it has been shown that uropathogenic Escherichia coli is linked to recurrent and persistent urinary tract infections (Tapiainen et al., 2011).
Plan
Lab tests: Urine samples will be required for lab testing to determine the pathogen causing the infection, and the appropriate choice of medication. Escherichia coli is a causative agent, accounting for a large majority of urinary tract infections in children (Albert et al., 2014).
Medication: The child should be given Nitrofurantoin Tablets at 7mg/kg/day administered six-hourly. The second line medication includes trimethoprim 8mg/ml – sulfamethoxazole 40mg/ml. Dosing should be based on trimethoprim, at 6-12kg/day (Williams & Craig, 2011; Fitzgerald, Mori, Lakhanpaul & Tullus, 2012).
Nonpharmacological: The child should ensure they are clean and wear clean clothes to minimize the risk of re-infection. Also, the child should increase her intake of fruits and vegetables or take multivitamins to boost her immunity.
Education: The caregivers should be advised on ways to manage the symptoms of the illness. Such measures include increasing fluid intake, taking warm baths and when and how to administer the medication.
Follow-up: in case the symptoms do not subside in two days, the caregiver is advised to return the child to the clinic for further investigation.
References
Alberici, I., Bayazit, A. K., Drozdz, D., Emre, S., Fischbach, M., Harambat, J., ... & Montini, G. (2014). Pathogens causing urinary tract infections in infants: a European overview by the ESCAPE study group. European journal of pediatrics, 174(6), 783-790.
Fisher, D. J. (2015). Pediatric Urinary Tract Infection. medscape.com.Retrieved June 28, 2015, from http://emedicine.medscape.com/article/969643-overview#a5.
Fitzgerald, A., Mori, R., Lakhanpaul, M., & Tullus, K. (2012). Antibiotics for treating lower urinary tract infection in children. The Cochrane Library.
Tapiainen, T., Hanni, A. M., Salo, J., Ikäheimo, I., & Uhari, M. (2014). Escherichia coli biofilm formation and recurrences of urinary tract infections in children. European journal of clinical microbiology & infectious diseases, 33(1), 111-115.
Williams, G., & Craig, J. C. (2011). Long‐term antibiotics for preventing recurrent urinary tract infection in children. The Cochrane Library. Read More
Share:
Tags
Cite this document
(“Week 10 Assignment Example | Topics and Well Written Essays - 500 words - 1”, n.d.)
Week 10 Assignment Example | Topics and Well Written Essays - 500 words - 1. Retrieved from https://studentshare.org/nursing/1699432-week-10

CHECK THESE SAMPLES OF Week 10

...Response to the post Kevin Gillin The post is full of conviction on the benefits of D&I and well it should be, however it does not godeeper than mentioning the generalizations which have been learned in the course. The principal message brought across by the post is that diversity and inclusion is a strategic advantage in a global business market. If one looks at a multinational or global organization, one would naturally expect that those subsidiaries which will be established in the different countries where the organization has its presence would be hiring from the local population. This is but sound logic because of host country regulations on labor and because it is cost-effective for the company. That being said, within... to the...
5 Pages(1250 words)Essay

...First Economics In the present day world the issue of global financial problems is not actuallysomething that is to be seen as a new phenomena. It is of essence to note that this is something that has been there for quite some time now. Notably since as early as the 1930s with the global recession that was witnessed clearly show that financial problems are some things just have been there and to a greater extent are here to stay. Question 1: Are financial collapses likely to occur - even predictable? Financial collapse is something that is bound to happen at some point in the world. There are some concerns that have been brought to light with this revelation. In the event of a financial collapse it is seen that international... Economics In...
2 Pages(500 words)Assignment

...Discussion Questions DISCUSSION Comprehensive Annual Financial Report (CAFR)" Analysts want to know whether the government is in a position to meet its obligations and extend its services normally to the public. They intend to know sources of revenue to the government and resource allocation. Intergovernmental revenue as a percentage of gross revenues identifies the tendency in government revenues as financing bases. A high ratio of intergovernmental revenue to total revenues is a likely indicator of government over-reliance on outside revenues that it has no or little control over and thus highly risky. However, if the ratio is low, it indicates that the government is not effectively utilizing available external sources... Questions...
2 Pages(500 words)Essay

... College Divorce rates are lower among college graduates because spouses have the opportunity to learn about how to work out marital issues with minimal influence from traditional gender roles. According to Meyer (2007), studies show that a wifes work is likely to stabilize marriage and college graduate wives are likely to seek employment as compared to those from lower levels. Marriage at a younger age is likely to lead to divorce because young couples rush to divorce courts before trying to work things out. Moreover, the freedom to choose mates and personal ambitions are prioritized over the couples success. Children born of divorced parents find it hard to trust their spouses and are less optimistic about the success... College Divorce...
1 Pages(250 words)Research Paper

... I Am Legend Robert Neville, the legend in the book, “I am a Legend”, is a character whose story perhaps would be told among the vampire community for a long time. Due to his courage and dedication to wipe out all the infected vampires, he stopped at nothing in making real his ambition. Although he was captured and killed, he felt that he had done his best in trying to wipe out the vampires. The fact that he was hated by the entire vampire community except for Ruth, he felt that he would remain a legend among them forever. The novel reveals the legendary character in him, making it suitable for the novel. Although the character referred to as a legend by the title in the novel did a morally wrong thing by killing vampires... I Am Legend...
1 Pages(250 words)Essay

...MGT Week 10 SA Paragraph In the focus of the commitment employees have in the operation of the company, there fact of the organizational culture proves important in ensuring that all people are in a position to achieve what they want. Organizational culture influences the conduct of different people in an organization so that it enhances the cooperation between the people involved but this is reinstated by the involvement of the leadership and the role it plays to enhance the employees. Paragraph 2 On another analysis, organizational culture contributes to the participation of employees in an organization because it moderates the relationships that are a important characteristics of a good working environment. Of importance... Week 10 SA...
1 Pages(250 words)Essay

...SOCIO-POLITICAL INFLUENCE ON EDUCATION Introduction Plato, one of the greatest philosophers and of Socrates believed in the power of education and culture in which an individual was exposed. In his classic, The Republic, Plato quips that a person takes nothing with them to their new environment, but education. As he or she sets out to the new world, his education and culture can either be a great burden or provide the greatest assistance (Plato, 2006). Our first level of education starts at home. As an infant, a baby interacts with its parents and or siblings through imitation and experimentation. As it grows, it continues the learning process through these two fundamental methods. Through experience and instruction, an individual...
8 Pages(2000 words)Essay

...Intro to Management Systems Week 10 "SaaS and Cloud Computing" Question No Answer A: Using Software as a Service (SaaS) eliminates the cost of installation/purchase as well as cost of maintenance and upgrade. The SaaS applications are easier to download and maintain. It also saves time of customers because maintenance responsibilities are transferred to IT department and user just connects through the internet and acquires a log in. Robustness, privacy, security and reliability are main disadvantages of SaaS for an organization. Answer B: Rapid adoption and acceptance of the SaaS has been due to its wider applications used for communication, accounting and customer relationship management. Its advantages are obvious as compared... to...
4 Pages(1000 words)Assignment

... Week 10 Alexander Chapter 6: The Fire This Time talks about racial discrimination of the blacks by the whites. The of the article is clear and appropriate as the blacks are tired of continued discrimination and have actually teamed up to condemn the setting up of biased judicial system that only targets the black people. I think we can all agree that it is hard to reach a colorblind society due to mass incarceration of black people. Civil right community should play an active role if racial discrimination was to be eliminated. Letter from a Birmingham Jail [King, Jr.]’ clearly talks about injustices that blacks undergo. The purpose of the article is made clear in the introduction and it has emphasized the need for blacks to team...
1 Pages(250 words)Essay

Let us find you another Assignment on topic Week 10 for FREE!