Comments (1)
Add to wishlist Delete from wishlist
Cite this document
Summary
The article makes a profound research and shows that as against ordinary medicine’s goal of extending life, hospice and other palliative care hugely help terminally ill patients to have quality life that is cherished by family and facilitates peaceful death…
Download full paper File format: .doc, available for editing
HIDE THIS PAPERGRAB THE BEST PAPER98.2% of users find it useful 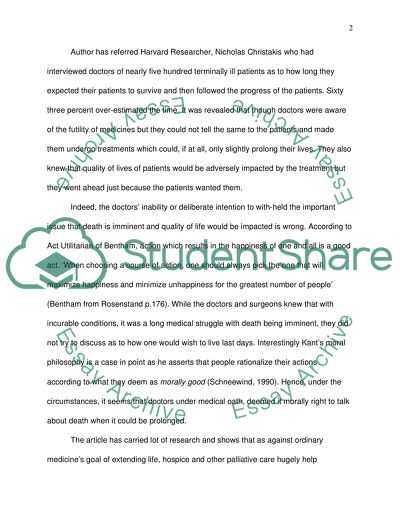 Extract of sample "Ethical issues on end of life care"

Download file to see previous pages This paper discusses the ethical issues concerned with terminally ill patients. It is an important issue that must be discussed convincingly to make last days of the patients fulfilling. In the recent times, the ethical issues on end of life care have increasingly become much more important than being major concern for increasing Medicare bills or the inability of medicines to provide the palliative care that patients deserve in their last days of lives. The author has cited the case of Sara Monopoli, who was pregnant and at the last stages was diagnosed with metastatic cancer that is incurable. The exhaustive treatment that she underwent was testament to the deteriorating quality of her life. Apart from the huge Medicare expenses, the author rightly questions the efficacy of a system that deprives patients of the right to die in dignity and gives them hope when none exist. Author has referred Harvard Researcher, Nicholas Christakis who had interviewed doctors of nearly five hundred terminally ill patients as to how long they expected their patients to survive and then followed the progress of the patients. Sixty three percent over-estimated the time. It was revealed that though doctors were aware of the futility of medicines but they could not tell the same to the patients and made them undergo treatments which could, if at all, only slightly prolong their lives. They also knew that quality of lives of patients would be adversely impacted by the treatment but they went ahead just because the patients wanted them. Indeed, the doctors’ inability or deliberate intention to with-held the important issue that death is imminent and quality of life would be impacted is wrong. According to Act Utilitarian of Bentham, action which results in the happiness of one and all is a good act. ‘When choosing a course of action, one should always pick the one that will maximize happiness and minimize unhappiness for the greatest number of people’ (Bentham from Rosenstand p.176). While the doctors and surgeons knew that with incurable conditions, it was a long medical struggle with death being imminent, they did not try to discuss as to how one would wish to live last days. Interestingly Kant’s moral philosophy is a case in point as he asserts that people rationalize their actions according to what they deem as morally good (Schneewind, 1990). Hence, under the circumstances, it seems that doctors under medical oath, deemed it morally right to talk about death when it could be prolonged. The article has carried lot of research and shows that as against ordinary medicine’s goal of extending life, hospice and other palliative care hugely help terminally ill patients to have quality life that is cherished by family and facilitates peaceful death. Most importantly, the family and carers have less cases of depression after the death of the dear ones when they die in the hospital’s intensive care unit, burdened with technology driven aids and devices. The Hospice makes effort to reduce pain at the last stages but just try to ensure that they have ‘fullest possible lives’ with their family and friends. As author asserts that death only comes once, hence, dignity in death must be observed or discussed with family and ...Download file to see next pages Read More
Share:
Tags
Cite this document
(“Ethical issues on end of life care Term Paper Example | Topics and Well Written Essays - 750 words”, n.d.)
Ethical issues on end of life care Term Paper Example | Topics and Well Written Essays - 750 words. Retrieved from https://studentshare.org/nursing/1434561-ethical-issues-on-end-of-life-care

lu
luciennegrimes added comment 2 years ago
Student rated this paper as
This document saved me today. I liked the content. It was very useful for my nursing course.

CHECK THESE SAMPLES OF Ethical issues on end of life care

Hiring another company or the third party to man the operations of the fleet of vehicles can put the company down. That would be like dealing with new employees who are not really working for the company, and who do not know our products. It will also be tantamount to revealing the secrets of our products and company that we have treasured all through the years. The best option is to work on the fleet of vehicles and get the right people to handle the operations.
There are doubts as to the exact number of vehicles we have to purchase since these are all plans and some hypotheses. But we tried to scale down our output, made some estimates and inside surveys, and come out to some numbers, which were reached by calculating...
8 Pages (2000 words) Assignment

Consumer sovereignty principle illustrates the fact that in a free market economy the consumer is free to consume what he wants. However, the consumer’s sovereignty does not have meaning if he/she is unable to buy what he/she wants. This paradox is solved through government intervention in the provision of those merit goods such as health care and education. On the other hand, agency theory indicates that conflicts between principals (e.g. shareholders or owners) and agents (e.g. managers) occur as a result of the latter misrepresenting facts and misinterpreting information so that resources can be diverted to uses which they regard as more lucrative. Since principals cannot themselves carry out the task of managing the busi...
8 Pages (2000 words) Case Study

This is also the position Stone (2007) takes in the quote under discussion.
Furthermore, Stone goes on to declare that Australia has been very slow to implement this practice as compared with other countries and government agencies. One of the primary reasons is that the public policy system in Australia is quite complex and the decision-makers have not come into agreement on where to place it in the policy matrix. This leaves Interprofessional Practice and Education in the dark (or the cold) as far as strategic planning for implementation as well as placing itself within the funding cycles of the government disbursements. (Stone, 2007)
Policies are created in order to put in place how politicians and government official...
6 Pages (1500 words) Assignment
sponsored ads
Save Your Time for More Important Things
Let us write or edit the term paper on your topic "Ethical issues on end of life care" with a personal 20% discount.
GRAB THE BEST PAPER

Let us find you another Term Paper on topic Ethical issues on end of life care for FREE!