Comments (0)
Add to wishlistDelete from wishlist
Cite this document
Summary
The transport sector comprises both the private and public sector. For a functional transport sector, there has to be a unique balance between the private and public sector…
Download full paperFile format: .doc, available for editing
HIDE THIS PAPERGRAB THE BEST PAPER95.2% of users find it useful 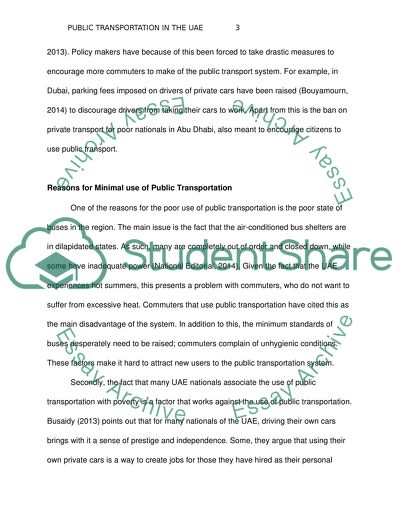 Extract of sample "Why do uae nationals don't use public transportation"

Download file to see previous pages In light of the recent calls to ban the use of private means of transport for people from lower economic classes in Abu Dhabi (Oueiti, 2014), it is clear that there are issues to be looked into surrounding the issue of transportation. This essay will look into some of the reasons as to why nationals of the UAE avoid public transportation and some of the proposed remedies for the situation.
The main forms of transport in the countries of the UAE are buses and trams Olson, 2012). Different countries in the UAE are all facing similar issues with their public transport system. That is, most of the nationals prefer to use private transport for commuting. As a result, officials report that there is congestion on their roads (Ruiz, 2013). Policy makers have because of this been forced to take drastic measures to encourage more commuters to make of the public transport system. For example, in Dubai, parking fees imposed on drivers of private cars have been raised (Bouyamourn, 2014) to discourage drivers from taking their cars to work. Apart from this is the ban on private transport for poor nationals in Abu Dhabi, also meant to encourage citizens to use public transport.
One of the reasons for the poor use of public transportation is the poor state of buses in the region. The main issue is the fact that the air-conditioned bus shelters are in dilapidated states. As such, many are completely out of order and closed down, while some have inadequate power (National Editorial, 2014). Given the fact that the UAE experiences hot summers, this presents a problem with commuters, who do not want to suffer from excessive heat. Commuters that use public transportation have cited this as the main disadvantage of the system. In addition to this, the minimum standards of buses desperately need to be raised; commuters complain of unhygienic conditions. These factors make it hard to attract new users to the public ...Download file to see next pagesRead More
Share:
Tags
Cite this document
(“Why do uae nationals don't use public transportation Research Paper”, n.d.)
Why do uae nationals don't use public transportation Research Paper. Retrieved from https://studentshare.org/miscellaneous/1645943-why-do-uae-nationals-dont-use-public-transportation

The Case for Universally Free Public Transportation The question is no longer whether a form of universally free public transportation is a good idea, but how to best implement such a system. The long-term benefits, such as lowering costs for constant infrastructure investment and creating more environmentally-friendly land use policies, far outweigh the short-term investments. In addition, given technological changes, it is now quite reasonable to suggest that public transportation will become more cost-efficient, more environmentally-efficient, and more demographically-efficient in the future. This essay will argue that now is the time to start planning for and investing in a universally free public transportation system.
...
2 Pages(500 words)Essay

Public Transportation in the UK

The fact that the value chain reflects upon the overall process of the business in a given industry as argued by Gerry Johnson and Kevan Scholes (2003) justifies the arguments in the previous sections that the information management system focusing on the ticketing and dynamic pricing will help accomplish efficient primary activity processing in the target market. From the arguments presented in this essay, it is clear that the efficiency in the railway industry is a critical element that is being affected by various macroeconomic factors. The PEST analysis also revealed that the railway industry possesses certain strengths like mass transportation, the geographical area covered, etc that can be used for the benefit of the busines...
16 Pages(4000 words)Article

Improving the public transportation in america

..., with the exception of a few countries, the United States has the most intelligent infrastructure for transportation in the world. With that said, the cost for maintaining this system is exceptionally higher than the cost for like nations. Such an expansive public transportation system means that there is a substantial consumption of energy to maintain the system (Achs, 1991). For the most prominent means of transportation i.e. the public bus, this means that the U.S. is putting out a large carbon foot print due to its use of gasoline. On the other hand, there are other sources of transportation such as the subway and railway systems that allow people to use trains and electrical energy for transportation. Unfortunately, only cities...
5 Pages(1250 words)Essay

Proper Equipment Use in Transportation Management

...Transportation Management Introduction In the contemporary scenario, people are mostly concerned about following a trend where they could be able to act with utmost consciousness both socially as well as environmentally. It is believed that people in today’s society have also become quite aware about the importance of any sort of resources and the fact that they are not unlimited and will come to an end one day or the other. In this regard, people living in the society have the need to emerge with new ideas and techniques to able to use resources of any kind in the most responsible manner further ensuring proper utilization of the same. This might be a beneficial prospect for the entire contemporary society. Moreover, it is also believed...
6 Pages(1500 words)Research Paper

Public Transportation vs Driving a Car

...Scheduling Apps Impact on Public Transportation of Affiliation: Scheduling Apps Impact on Public Transportation Introduction In the current wave of technological developments as an attribute to globalization, many industries have devised numerous mechanisms involving the use of technology, which work to make easy the different operations in such industries. In the taxi industry equally, has undergone significant and drastic changes in the recent years, which involved the introduction of application-based taxi and car services. The transport sector has for a long period been chaotic operations, making people have the will to ride the bus or train, unless the appropriate and effective management tools are put in place for the management...
8 Pages(2000 words)Coursework

... influence on the people. This is just one side of the story because many people opt for private cars because they do not find the public transport up to the mark (Das; Lackmeyer). It then becomes the responsibility of the government to devise policies that uplift the image of public transportation and also improve the system as a whole. Timeliness, convenience of travel and basic facilitation are just some of the many attributes that the masses look for. Adequate investment in infrastructural development of the roads and highways, use and implementation of technologies and positioning of public transit as cost effective and environment friendly can help in improving the current situation of the public transport. Even though...
9 Pages(2250 words)Term Paper

.... Increased transport demand of people and goods resulting from limited capacity of infrastructure, public transport service inefficiency and lack of railway and road networks is one of the problems. Also, problems like the need for planning of better transport land usage and information systems that are reliable. In addition, increased number of vehicles, people, congestion, vehicle pollution and accidents in the country needed to be addressed. “Kuwait 2035” was launched to promote the country’s financial and commercial status in order to enhance its sustainability. The development of the National Development Plan, a 4 year plan, was established to ensure the implementation of “Kuwait 2035”. The Ministers Council for Implementation adopted...
19 Pages(4750 words)Literature review
sponsored ads
Save Your Time for More Important Things
Let us write or edit the research paper on your topic "Why do uae nationals don't use public transportation" with a personal 20% discount.
GRAB THE BEST PAPER

Let us find you another Research Paper on topic Why do uae nationals don't use public transportation for FREE!