Comments (0)
Add to wishlistDelete from wishlist
Cite this document
Summary
The author of this article under the title "Creative Strategies for Community Health" touches upon the understanding of this global problem obesity, successful innovative strategies used in childhood obesity programs, moreover, the author explains their effectiveness and creativeness…
Download full paperFile format: .doc, available for editing
HIDE THIS PAPERGRAB THE BEST PAPER98.2% of users find it useful 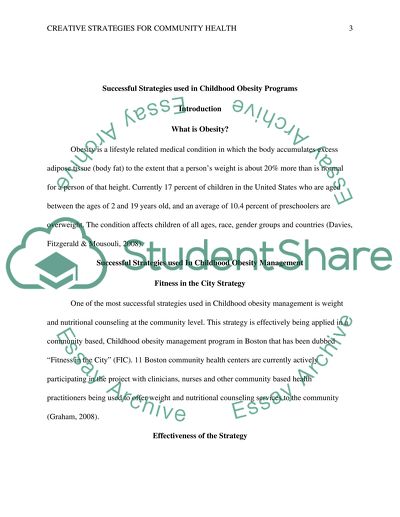 This paper will seek to identify successful strategies that are currently being used in programs designed to help manage Childhood obesity.
Successful Strategies used in Childhood Obesity Programs
Introduction
What is Obesity?
Obesity is a lifestyle-related medical condition in which the body accumulates excess adipose tissue (body fat) to the extent that a person’s weight is about 20% more than is normal for a person of that height. Currently, 17 percent of children in the United States who are aged between the ages of 2 and 19 years old, and an average of 10.4 percent of preschoolers are overweight. The condition affects children of all ages, race, gender groups, and countries (Davies, Fitzgerald & Mousouli, 2008).
Successful Strategies used In Childhood Obesity Management
Fitness in the City Strategy
One of the most successful strategies used in Childhood obesity management is weight and nutritional counseling at the community level. This strategy is effectively being applied in a community based, Childhood obesity management program in Boston that has been dubbed “Fitness in the City” (FIC). 11 Boston community health centers are currently actively participating in the project with clinicians, nurses and other community-based health practitioners being used to offer weight and nutritional counseling services to the community (Graham, 2008).
Effectiveness of the Strategy
The foremost benefit of this approach is that, clinicians are able to attend to both children and parents at the same time, and hence they find themselves better equipped to help work out adequate lifestyle changes suitable for the whole family. Another major advantage of this strategy is that the children attending the appointments and the rest of their families are not required to leave their neighborhoods so as to be able to access the services this has been of immense help in reducing the number of children who end up missing appointments (Graham, 2008).
The Columbus City Schools Wellness Initiative
The Columbus city schools wellness initiative uses innovative strategies to help in reducing childhood obesity rates in the district. The programs use strategies such as regular BMI screenings for children, water only options in vending machines, in the schools participating in the program, restricted servings for beverages other than water, development of enhanced health education curriculums in the schools. These strategies have considerably helped reduce the prevalence of childhood obesity in the schools participating in the program (National children’s Hospital, 2011).
The creativeness of the Strategy
The limitation, control of calories intake and frequent monitoring of the children’s BMI is an exceptionally creative way of reducing childhood obesity in the schools. This is especially relevant in light of the fact that students spend about 20-30% of their time at schools, and are supposed to get approximately 35-50% of their daily calories intake requirements, while at the schools (National children’s Hospital, 2011).
Application of the Two Strategies to other Population groups
The Fitness in the City program, in Boston, had to be adjusted depending on the culture of the family that was being counseled on their weight and nutrition. This was because the members of the community were found to come from different cultures with different cultural diets and dietary restrictions. Research on the members of a population will have to be applied before this strategy can be implemented in a population (Graham, 2008).
The Ohio schools wellness initiative is designed to apply to any person and hence is not restrictive and can be applied to any population (National children’s Hospital, 2011).
Creative Strategy Proposal for Childhood Obesity Management Program
My creative strategy for reducing childhood obesity in schools would involve the formation of after school fitness clubs in schools. These clubs would target children of all ages, and engage them in physical workouts that will be designed to be fun, but effective in helping children maintain acceptable levels of BMI. Research has shown that regular exercise is the most effective way of reducing excess weight and maintaining acceptable levels of BMI (Greenberg, Dintiman & Oakes, 2004). Read More
Share:
Tags
Cite this document
(“Creative Strategies for Community Health Assignment”, n.d.)
Creative Strategies for Community Health Assignment. Retrieved from https://studentshare.org/miscellaneous/1597779-creative-strategies-for-community-health
(Creative Strategies for Community Health Assignment)
Creative Strategies for Community Health Assignment. https://studentshare.org/miscellaneous/1597779-creative-strategies-for-community-health.
“Creative Strategies for Community Health Assignment”, n.d. https://studentshare.org/miscellaneous/1597779-creative-strategies-for-community-health.
Comments (0)
Click to create a comment or rate a document

CHECK THESE SAMPLES OF Creative Strategies for Community Health

...? Community Health Promotion Ricardo A. Valera Athabasca Yvonne Moore Community Health Promotion Health promotion is defined as the process where people are empowered by the health sectors so that they have control over their health and in its improvement (Bracht, 1999). Strategies that are included in this process can range from anything: from counseling to screening, to immunizations and other medical interventions as needed by the people (Hunt, 2009). In this light, the implication of an active health promotion is that the health sectors are not just the only ones...
10 Pages(2500 words)Essay

...of the registered community health nurse is to effectively interact with the aboriginal patients, their close families, and other stakeholders to ensure that the goal of healthcare provision to the kidney diseases patients is achieved (Cass et al., 2002, pp.466-470). The community health nursing providers can work with the local community by helping them change their lifestyle. This could be done through the use of interpersonal communication skills that the nursing practitioners are normally encouraged to develop in order to serve their patients effectively. This kind of approach would require that the research and implementation of...
11 Pages(2750 words)Essay

...? Community Health Epidemiology Jefferson County is a region located at the of Texas. As per the census, the county hosted 252, 273 people, at a population density of 280 per square mile. The population is multi-ethnic and racial, but the larger population is comprised of whites, at 57.24%. An approximated 17.40% of the populations live below the poverty line, while unemployment levels stand at 9.4% - which amounts to about 27,918 people. Health sector indicators show that 10.8% of the people are not insured, thus greatly, at the risk of the health risk factors there, including behavioral risks, substance abuse, nutrition imbalances and unfavorable exercising patterns....
6 Pages(1500 words)Essay

...? Review and Summary of Hot Zone by Richard Preston Reaction to Book I found the book to be particularly interesting. It was interesting how the virus ended up in America from South Africa. However, it also scared me that the increase in globalization could result in more of such issues for the health community. As diseases are increasing in number, the health community is inept to deal with such viruses. This book allows us to understand the implications of the introduction of such viruses in the community. For me, the Ebola virus is more fatal that AIDS. At least, one knows how AIDS travels. It does not travel through the air but for Ebola we are...
10 Pages(2500 words)Book Report/Review

...? Community Health Part Hot Zone is written by Richard Preston. The book had written based on a true story. This terrifying true story is based on the non-fiction bio-thriller. There are several serious dieses that can pose threat to the life o human beings. The book is all about the reflection of a true fact. The book is comprised of several accurate and chilling stories of various lethal viruses. The book is based upon the outbreak of a deadly virus named Ebola. The virus was spread from one monkey’s house in the Virginia. The deadly Ebola virus, Marburg virus, Sudan Virus and Ravn Virus are the 4 agents of bio safety level. The story is quite interesting and attractive. Writer has used several short...
12 Pages(3000 words)Book Report/Review

...). The problems are shared among the members of the aggregate, with problems including lack of shelter, lack of money and lack of food. The aggregate is particularly vulnerable in terms of healthcare due to the lack of healthy lifestyle factors and lack of access to health care. The goals among homeless people are also shared, with the goal being to gain housing and access to other services which they do not currently have. However they are not considered a community as they do not usually work together to achieve these goals. Homeless people address their goals individually, with the help of external agencies (McCarty, 2005). References Clark, M-J. (2002) Community...
2 Pages(500 words)Essay

.... Applying both frameworks for the promotion of health in Community ZZ leads to almost similar results in the formulation of the program. The Kreuters’ Precede-Proceed model offers better clarity for the implementation of program. The two theoretical frameworks call for identifying and assessing the objective and goals for the program. Once this has been done then the appropriate time frame for either the perceived solution, as a whole, or the initial segment of the perceived solution is decided on. Then the strategies to be utilized for the successful outcome of the program are decided. In the case of Community ZZ’s, which is a predominantly poor...
14 Pages(3500 words)Essay

...Community Health Strategies - Responsible Sexual Behavior in Relation to the Effect of Sexually Transmitted Infections and Preterm Birth - Name Instructor’s Name Subject / Course Date Total Number of Words: 1,291 Introduction As defined by the World Health Organization, preterm birth is referring to the delivery of infant before reaching the 37th week of gestation (Haas, 2008). As of 2004, the rate of preterm birth in Duval County was 13.0 per 1,000 live births which is relatively high as compared to the 2010 target of 7.6 per 1,000 live births (Center for Health Statistics Report - Infant Mortality, 2006, p. 3). In relation to preterm birth, the rate...
5 Pages(1250 words)Research Paper

Potential of Creative Arts in Caring for Dementia People

.... However, it is revealed that many people including the medical personnel have criticized the importance of creative arts in the therapy. Enhancing social networks in the context of dementia care The use of creative arts based approaches in health sector is a fast growing strategy which is mostly used in dementia therapy. Notable to mention is that, incorporation of the creative arts approaches has been noted much to be very effective. This is precisely because it manages to improve the well being of older people living with dementia (Condren, 2001). Under this umbrella, people living with dementia can now combat loneliness, problems of isolation and...
15 Pages(3750 words)Essay
sponsored ads
Save Your Time for More Important Things
Let us write or edit the assignment on your topic "Creative Strategies for Community Health" with a personal 20% discount.
GRAB THE BEST PAPER

Let us find you another Assignment on topic Creative Strategies for Community Health for FREE!