Comments (0)
Add to wishlistDelete from wishlist
Cite this document
Summary
This research proposal is a proposal for a cross-sectional study of medical practice and awareness of radiation related health risks and strategies to minimize radiation exposure to children among physicians.
Previously a lot of research has been done on this topic. This…
Download full paperFile format: .doc, available for editing
HIDE THIS PAPERGRAB THE BEST PAPER93.6% of users find it useful 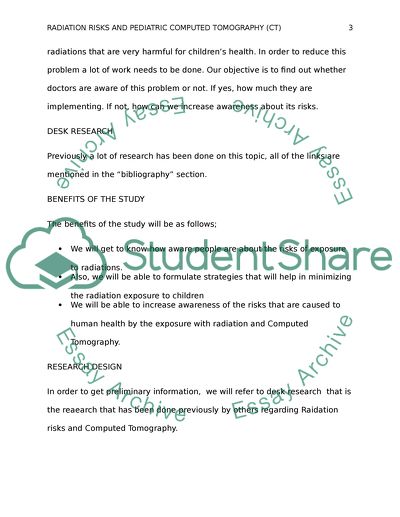 Extract of sample "Radiation Risks and Paediatric Computed Tomography (CT): a cross-sectional study of medical practice and awareness of radiation related health risks and strategies to minimise radiation exposure to children among physicians"

Download file to see previous pages Our objective is to find out whether doctors are aware of this problem or not. If yes, how much they are implementing. If not, how can we increase awareness about its risks.
Next, we will design a questionnaire for the general public to get information regarding how aware they are of the hazards of the Radiations’ exposure risks and Computed Tomography’s effects on human health.
We will also make a questionnaire for physicians to see how aware they are and what is their perspective on this issue and how they think this risk can be minimized for children at least and to see what strategies they use currently to minimize the risk of radiations to children.
Moreover, we will conduct a focus group including physicians and technicians who know about the risks of radiations and computed tomography and who can help in formulation of strategies for reduction of risks of radiation exposure among children.
First, the secondary data will be referred to and then we will refer to the questionnaires and focus group that we will conduct. We will use some or all of the following statistical tools to analyze the data at hand;
National Cancer Institute. Radiation Risks and Pediatric Computed Tomography (CT): A Guide for Health Care Providers. Retrieved from http://www.cancer.gov/cancertopics/causes/radiation/radiation-risks-pediatric-CT
David J. Brenner, Carl D. Elliston, Eric J. Hall, Walter E. Berdon. Columbia/ Estimated Risks of Radiation- Induced Fatal Cancer from Pediatric CT. Retrieved from ...Download file to see next pagesRead More
Share:
Tags
Cite this document
(“Radiation Risks and Paediatric Computed Tomography (CT): a Research Proposal”, n.d.)
Radiation Risks and Paediatric Computed Tomography (CT): a Research Proposal. Retrieved from https://studentshare.org/miscellaneous/1591176-radiation-risks-and-paediatric-computed-tomography-ct-a-cross-sectional-study-of-medical-practice-and-awareness-of-radiation-related-health-risks-and-strategies-to-minimise-radiation-exposure-to-children-among-physicians

CHECK THESE SAMPLES OF Radiation Risks and Paediatric Computed Tomography (CT): a cross-sectional study of medical practice and awareness of radiation related health risks and strategies to minimise radiation exposure to children among physicians

In the last twenty years, the diagnostic use of computed tomography scans has increased by a thousand percent. These scans do, obviously, make use of ionizing radiation to produce their images, which can be harmful to human health in even small dosages. Protecting the patient from harm is the cornerstone of the profession of radiology, and reducing radiation exposure while maintaining a high level of image quality and therefore diagnostic ability is vital. Key to this goal is understanding the use of computed tomography scans, the risks of their radiological effects, and the methods available to reduce exposure. Reducing exposure to radiation is the only way to make this important technology safer.
The use of a computed tomo...
9 Pages(2250 words)Dissertation

The Apparent Lack of Motivation and Growing Anomie Among the Employees

Even without taking into account those respondents who have offered a neither-positive, neither-negative rating, the results show that almost half of the sample surveyed has ranked their enjoyment at work unfavorably.
The second variable tests whether the employee enjoys working on his or her particular shift. On this variable, 3 respondents offer no response, but 24 out of 75 employees give this a positive or very positive rating, which equates to 32% of the sample. 36 respondents have however ranked this variable as negative or very negative, which equates to 48% of the sample. Yet again, this variable is unfavorable for almost half the sample, which indicates that most employees are not happy with the shift they are workin...
9 Pages(2250 words)Case Study

Most states have not only determined possible additional requirements for license renewal or determination of a person’s fitness to drive but also concerns raised by the elderly drivers as to their possible isolation from society and retaining their mobility despite being unable to drive. Policymakers and research should also focus on these areas which are important to elderly drivers.
It was said that the perspective and the actions taken by most of the licensing authorities have been changed over the last 20 years (Eberhard, 2008). This was due to the fact that there has been a wide range of developments especially as to the aspect of “driver testing” and programs tackling concerns of older drivers (Eberha...
9 Pages(2250 words)Research Paper

With the increased globalization and competition, it has become very difficult to maintain customer loyalty. The same has been experienced by UK mobile service providers. Customer retention is an acute problem for companies. It has been found that the lack of proper customer relationship management is mainly responsible for this global issue. Vodafone Group Plc, UK’s largest telecommunication company has been selected for undertaking the research to determine the root cause of this problem and to investigate other relevant reasons. A report of 2009 published by the company reveals that there are severe problems related to customer retention. It is well known that the mobile phone industry has boomed over the last eight years...
19 Pages(4750 words)Research Proposal

The most common physics-based artifact is beam hardening which is caused due to differential absorption of low and high energy photons of an x-ray beam as it passes through an object. Such beam hardening phenomena can give rise to cupping and streaking or dark band artifacts (Barrett & Keat, 2004). A CT image showing streaking artifacts is shown below
The methods used to reduce artifacts due to beam hardening include filtration that uses attenuating materials to filter low energy particles, calibration correction, and use of software to correct the hardening (Barrett & Keat, 2004; Huang, n.d). Mega-voltage cone-beam CT scans which are now used for dose calculations during treatment of diseases can have cupping artifac...
8 Pages(2000 words)Assignment

“Autistic spectrum disorders share a triad of impaired social interaction, communication, and imagination, associated with a rigid, repetitive pattern of behavior” (Wing, 1996). I strongly believe that social interaction skills also get affected due to autism, which creates many problems for children. In my op...
6 Pages(1500 words)Coursework
sponsored ads
Save Your Time for More Important Things
Let us write or edit the research proposal on your topic "Radiation Risks and Paediatric Computed Tomography (CT): a cross-sectional study of medical practice and awareness of radiation related health risks and strategies to minimise radiation exposure to children among physicians" with a personal 20% discount.
GRAB THE BEST PAPER

Let us find you another Research Proposal on topic Radiation Risks and Paediatric Computed Tomography (CT): a cross-sectional study of medical practice and awareness of radiation related health risks and strategies to minimise radiation exposure to children among physicians for FREE!