Comments (0)
Add to wishlistDelete from wishlist
Cite this document
Summary
It is an Arabic speaking group of people also termed as Alawites, Alawi Shias, Ansariyyah and Nusayris. The ethnic and the religious group of Alawis, is the successors of Ali ibn Abi Talib who was the cousin and…
Download full paperFile format: .doc, available for editing
HIDE THIS PAPERGRAB THE BEST PAPER93.2% of users find it useful 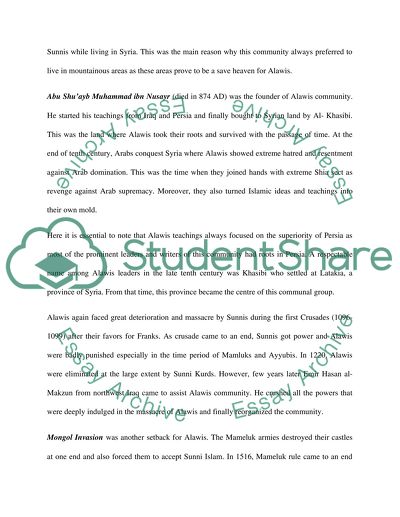 Extract of sample "The 'Alawis"

Download file to see previous pages The Alawis community has survived in Syria as an individual group in spite of repeated threats and massacre by Sunni rulers who did not consider them as a separate religious group.
Next to north western mountain ranges, Alawis are also settled in Latakiah province in Syria. Some nearby districts populated with this community involve Southern Turkey and northern Lebanon. When we look into recent years, we can observe that this community has moved to urban areas of Syria.
Alawis belong to that Shia group which is considered the extreme sect. When we look into the history of Alawis community, we can clearly observe that they were always persecuted by Sunnis while living in Syria. This was the main reason why this community always preferred to live in mountainous areas as these areas prove to be a save heaven for Alawis.
Abu Shu’ayb Muhammad ibn Nusayr (died in 874 AD) was the founder of Alawis community. He started his teachings from Iraq and Persia and finally bought to Syrian land by Al- Khasibi. This was the land where Alawis took their roots and survived with the passage of time. At the end of tenth century, Arabs conquest Syria where Alawis showed extreme hatred and resentment against Arab domination. This was the time when they joined hands with extreme Shia sect as revenge against Arab supremacy. Moreover, they also turned Islamic ideas and teachings into their own mold.
Here it is essential to note that Alawis teachings always focused on the superiority of Persia as most of the prominent leaders and writers of this community had roots in Persia. A respectable name among Alawis leaders in the late tenth century was Khasibi who settled at Latakia, a province of Syria. From that time, this province became the centre of this communal group.
Alawis again faced great deterioration and massacre by Sunnis during the first Crusades (1096-1099) after their favors for Franks. As ...Download file to see next pagesRead More
Share:
Tags
Cite this document
(“The 'Alawis PowerPoint Presentation Example | Topics and Well Written Essays - 1000 words”, n.d.)
The 'Alawis PowerPoint Presentation Example | Topics and Well Written Essays - 1000 words. Retrieved from https://studentshare.org/miscellaneous/1590946-the-alawis

CHECK THESE SAMPLES OF The 'Alawis

...? White Paper on FAT File Systems 4 August, File Allocation Tables (FAT) is of huge significance to the users of Compact Flash (CF) because the requirement of FAT type is different for the devices that are optimized with over 2.14 gigabytes (GB) of storage capacity unlike those that require only 2.13 GB. This topic has gained huge importance specifically after the hard disk’s application into the personal computers. This paper tends to create awareness among the camera users regarding the FAT through a comprehensive discussion of its history. Introduction: The subject of this white paper is the illustration of FAT File Systems. This white paper is directed at creating an understating among the users of camera regarding the File Allocation... White...
4 Pages(1000 words)Essay

The United States and Syria Conflict

...allegiance with Iran. For this reason, the paper will dwell on the prospects for long-term peaceful relations between the United States and Syria Syria In brief, Syria is one of the most heterogeneous states in the world. It holds in its land a vast number of sectarian and non-sectarian groups that are autonomous and independent. The diversity within the state is considered as a hindrance in the creation of policies and the establishment of a strong government. In totality, there are almost 19 million people in Syria which are divided into ten major sects. The Sunni Arabs composes 65 percent of the total population in Syria, followed by Alawis with 12 percent, Christians with 10 percent, Kurds with nine percent, Druze...
6 Pages(1500 words)Essay

...was highly charged no matter the type of business being intended to be started; this was a blow to those without good contact and money. Corruption was so evident to an extent that government forces were selling weapons to the anti-Assad rebels, and well up families bribed the authority for the release of their detained members during the uprising. The state fear was the greatest reason why Syrians took the regime as their way of survival but response of the brutal security forces to the peaceful protest made thousands to join the uprising without fear, creating a motto that stated ‘More funerals, more protest’. Having in Mind majority of the country are Sunni Muslim and the ruling government is in the hands of the...
5 Pages(1250 words)Research Paper

... that didn’t tolerate activities of the Muslim brotherhood which was the main opposition to the ruling regime at that time. He encouraged the idea of divide and rule. He enjoyed the support of the Sunni Arabs who made up almost 60% of the entire Syrian population and that of Christians. He also had the support of his minority group of the Alawis. He excluded those who were perceived not to be in support of his policies like the Kurds. When his son took power in 2000, he introduced political and economical reform measures in Syria. He released scores of political prisoners and initiated a number of economic reforms that made him popular with the people. According to Assad Al-Saleh (2014), the period known as the Damascus spring... the...
6 Pages(1500 words)Essay

.... However, before then, Syrian-Armenians were subjected to political persecution in the early 1900’s thus they tended to exhibit neutrality in relation to either supporting the government or the opposition (www.hyeetch.nareg.com.au). Their leadership structure is majorly based in the church, with religious leaders from the three denominations making most of the decisions regarding the community needs (www.hyeetch.nareg.com.au). Armenians of Syria are relatively affluent, this is because of the fact that they have invested massively in education among men and women and are considered a hard-working community. Work Cited "THE ALAWIS OF SYRIA." THE ALAWIS OF SYRIA. Web. 23 Nov. 2014.

...and Syria, which are traditional fault lines of the traditional fault line around Islam’s sectarian divide (Kamrava 99). Many of these powers, which are held sectarian minorities such as the Alawis in Syria and the Reigning family of Baharin, which is Shia despite the fact that they are more than the Shias. The civil war in Syria despite being a primarily political conflict has uncovered the spiritual tension in the region; it is gradually evolving into a religious war between the Sunnis and Shias in the area. According to some analysts, it is seen as the only way the Sunnis can curtail the spreading influence of Iran’s power in the Arab world. In modern day, extremist groups from both sides use a variety of tools in...
6 Pages(1500 words)Essay

Interrelations Between the Syrian Conflict And the Instability Situation In Lebanon

...in the analysis of existing literature to ascertain the exact nature of the situation. The report uses existing literature to analyze the military, socio-economic and the political situation in the region Introduction For as long as two generations, Lebanon has been a divided nation, paying homage to most of the Lebanon’s Shia Alawi communities and similarly a stronghold of Sunni conservatism. In their respective command stations of Jebel Mohsen and Bab al-Tabbaneh, the two sects have continued to be at odds ever since the war broke out . The crisis has seen hundreds die and making it among the worst bloodshed in the region. Recently, the outbreak of the Syrian conflict and the influx of thousands of Syrian refugees...
7 Pages(1750 words)Research Proposal

Political Violence in Syria And Iraq

...revolution. Despite Syria being a majority Sunni Muslim country, top leadership positions were held by Alawis, a Shiite religious minority to which Bashar’s family belonged. The government media censorship rub the citizens wrongly. The Syrian government had censored the media, thereby determining the content that could be aired in the televisions, radios and even on social media. The censorship limited the media’s authority to report oppressive things that the government engaged in (Landis & Joshua 2012) What Caused the Militarization of the Syrian Revolution? A major cause for the militarization of the Syrian revolution was the growing impatience of the Arab Gulf leaders with the futility of actions by the West and the...
8 Pages(2000 words)Essay
sponsored ads
Save Your Time for More Important Things
Let us write or edit the powerpoint presentation on your topic "The 'Alawis" with a personal 20% discount.
GRAB THE BEST PAPER

Let us find you another PowerPoint Presentation on topic The 'Alawis for FREE!