Comments (0)
Add to wishlistDelete from wishlist
Cite this document
Summary
They belong to the sub-order odontocetes of the order cetacea and are classified under the biggest and the most diverse family of this order – the family Delphinidae, which comprises more than…
Download full paperFile format: .doc, available for editing
HIDE THIS PAPERGRAB THE BEST PAPER97.9% of users find it useful 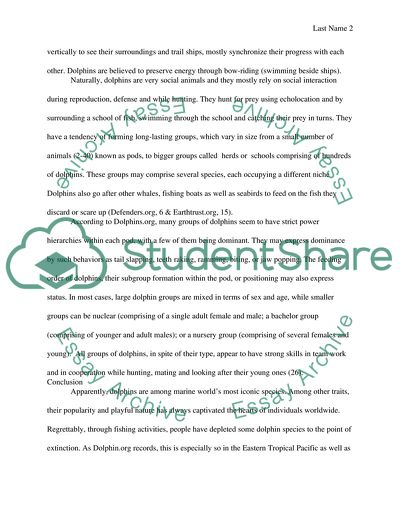 Dolphins Introduction Dolphins are part of toothed whales’ family that includes pilot whales and orcas. They belong to the sub-order odontocetes of the order cetacea and are classified under the biggest and the most diverse family of this order – the family Delphinidae, which comprises more than thirty existing species (Dolphins.org, 3). They are commonly called small cetaceans as a group, although some of them are fairly big, reaching lengths of 20 feet and above. Dolphins are usually gray in color and their backs are darker than other parts of their bodies. They have a distinctive beak and their teeth have the shape of a cone. Generally, male dolphins are bigger than the females. Dolphins live worldwide in almost all major seas (mostly shallow seas of the continental shelves) and oceans, and some large river systems. Nevertheless, their circulation is not random – each species of dolphin has become specialized to thrive in a specific niche, and each species of dolphin has a special role in the niche (Earthtrust.org, 1-4, & Defenders.org, 1).
All dolphins are carnivores and while some feed exclusively on cephalopods or fish, the diet of others is more varied and it includes lobsters, fish, crabs, squid, and shrimps. Even though dolphins are said to possess pretty good eyesight, their murky/dark environment usually reduce their visibility. They therefore largely rely on their hearing sense to comprehend the world around them and to look for prey (Earthtrust.org, 12).
They have a large brain (almost the humans’ size) that possesses a remarkable capability of learning and mimicking behaviors (Earthtrust.org, 9). Defenders.org records the fact that dolphins famous for their dexterity and mischievous character, which makes them wildlife watchers to love them. They can be seen leaping out of water, spy-hop/rise out of the water vertically to see their surroundings and trail ships, mostly synchronize their progress with each other. Dolphins are believed to preserve energy through bow-riding (swimming beside ships).
Naturally, dolphins are very social animals and they mostly rely on social interaction during reproduction, defense and while hunting. They hunt for prey using echolocation and by surrounding a school of fish, swimming through the school and catching their prey in turns. They have a tendency of forming long-lasting groups, which vary in size from a small number of animals (2-40) known as pods, to bigger groups called  herds or  schools comprising of hundreds of dolphins. These groups may comprise several species, each occupying a different niche Dolphins also go after other whales, fishing boats as well as seabirds to feed on the fish they discard or scare up (Defenders.org, 6 & Earthtrust.org, 15).
According to Dolphins.org, many groups of dolphins seem to have strict power hierarchies within each pod, with a few of them being dominant. They may express dominance by such behaviors as tail slapping, teeth raking, ramming, biting, or jaw popping. The feeding order of dolphins, their subgroup formation within the pod, or positioning may also express status. In most cases, large dolphin groups are mixed in terms of sex and age, while smaller groups can be nuclear (comprising of a single adult female and male; a bachelor group (comprising of younger and adult males); or a nursery group (comprising of several females and young). All groups of dolphins, in spite of their type, appear to have strong skills in team work and in cooperation while hunting, mating and looking after their young ones (26).
Conclusion
Apparently, dolphins are among marine world’s most iconic species. Among other traits, their popularity and playful nature has always captivated the hearts of individuals worldwide. Regrettably, through fishing activities, people have depleted some dolphin species to the point of extinction. As Dolphin.org records, this is especially so in the Eastern Tropical Pacific as well as in the Black Sea, off the coast of West Africa. There is therefore dire need for governments to renew their commitment to save these and other endangered species and to enact and/or strengthen the Endangered Species Act in order to protect them.
Works Cited
Defenders.org. Dolphin. 2012. Web.
Dolphins.org. Natural History. 2007. Web.
Earthtrust.org. Dolphins. 2008. Web. Read More
Share:
Tags
Cite this document
(“Dolphins Research Paper Example | Topics and Well Written Essays - 500 words”, n.d.)
Dolphins Research Paper Example | Topics and Well Written Essays - 500 words. Retrieved from https://studentshare.org/miscellaneous/1590878-dolphins

CHECK THESE SAMPLES OF Dolphins

...? BIOGEOGRAPHY OF BOTTLENOSE DOLPHINS TABLE OF CONTENTS INTRODUCTION 4 BIOGEOGRAPHY 5 EVOLUTIONARY HISTORY 7 CONSERVATION/ENVIRONMENTAL ISSUES9 REFERENCES 11 Abstract Bottlenose dolphin or Tursiops truncatus is a marine mammal inhabiting both coastal and inshore areas of the oceans worldwide except the Polar Regions. The origins of the organism can be traced back to early Oligocene with fossil records available. It has evolved to adapt to its aquatic habitat after evolution trail going through an intervening terrestrial form. During the course, it has developed such unique features as vocal learning through echolocation. The large brain size and the vocal learning on one hand are the cause of the organism being a major attraction... and a...
7 Pages(1750 words)Research Paper

Should Dolphins be Considered Persons

...? Should dolphins be considered persons Insert Personhood is connected with a variety of theoretical issues with the most significant being that persons get better treatment that nonpersons. Although the terms human and person are used interchangeably as synonyms on a daily basis, the two words have a different meaning form a philosophical perspective. The word human is a scientific concept with reference to members of the biological category Homo sapiens. On the other hand, the word person refers to a combination of complex traits by which we define intelligence, self-consciousness and freewill (White 2007). According to recent research by scientists, dolphins have proven to possess sophisticated nervous...
3 Pages(750 words)Essay

...Marine Dolphins Introduction Dolphins are known as small cetaceans, though some dolphins are quite large. They can mature up to a length of over 20 feet. The biological classification of dolphins is as follows: Kingdom Animalia Phylum Chordata Class Mammalia Order Cetacea Sub-order Odontoceti Family Delphinidae Genus Delphinus Species delphis From the classification, the scientific name for dolphin is Delphinus delphis. Dolphins have their habitats in oceans, seas and major rivers. They have become specialized to their different ecological niche that they occupy. Dolphins are exclusively carnivorous. Some feed...
5 Pages(1250 words)Research Paper

... Massive extinction of dolphins Introduction A century and a half ago, Henry David Thoreau wrote down that the wild is conservation of the world. Mankind is not supposed to be living in human societies that enclose small conserved ecosystems inside them. Human societies are supposed to be sustained in small populaces’ reserves inside affiliated ecosystems. According to Aldo Leopold, “his visions are more than fifty years old and they are still cut trail for humankind (Miller 113).” At the same time, he still stands as one of the greatest conservator during the 1900’s. Currently, we are residing in what preservation biologists refer to as the Holocene extinction occurrence. This is the sixth worldwide massive extinction even... in the...
6 Pages(1500 words)Essay

...Dolphins are human Experts in conservation and philosophy believe that dolphins are brilliant and intelligent to supportthe ethical or moral considerations as persons or humans. When people identify and recognize the rights of dolphins, it would imply an end to their captivity. This argument is based on assertion that dolphins have intricate brain and human or person like level of self awareness. This has led experts in philosophy and conservation to conclude that dolphins are humans. Thomas White notes that dolphins should be awarded an equal treatment same to human beings. This is in regard to scientific evidence which supports the...
4 Pages(1000 words)Term Paper

Healthcare Services for the Deaf

...﻿Dolphins Facts and Information In the vast areas of the sea, dolphins are rightfully called human’s best friend. Our contact with dolphins has long been documented and adored all over the world. We all have heard stories about dolphins saving lives or guiding ships in times of trouble. We have also seen movies made about them. We have also witnessed how they play and entertain people at different theme parks. However, beyond our interest in dolphin interaction is the amazing fact behind its anatomy, behavior, and communication. Weighing up to 500 pounds and growing 8 to 9 feet in length, dolphins, as marine mammals, breath with their...
4 Pages(1000 words)Article

...In reflecting upon the previous writing assignments and research I have done in the various assignments and using the knowledge I have gained to this point there are several objectives that this paper will meet. A description of the previous three projects, an expansion and review of my research methods describing my use of text based or qualitative data, and a comparison of the Sciences, Humanities and Social Sciences from the perspective of research emphasis that each discipline prefers will be discussed in this Final Reflection Essay. My animal being the dolphin I will also consider how the Humanities, Sciences and Social Sciences perspectives differ in their research of the dolphin. Finally I will...
6 Pages(1500 words)Research Paper

...﻿ Dolphins What things enter in your mind when you read the word, “Dolphin”? The sea? The aquarium? Theme parks, maybe? Well for some people, dolphins can even mean food. Yes, I was surprised with that information too. However, let’s start with the basics first. The word dolphin came from the Greek word delphus meaning womb. This is understandable because dolphins are cetaceans. Cetaceans are basically whales – and whales are aquatic mammals. So basically, because of its fish-like appearance, dolphins are “fish with wombs”. There are a lot of species of dolphins – almost forty species! They can be large or small and...
3 Pages(750 words)Essay

Let us find you another Research Paper on topic Dolphins for FREE!