Comments (0)
Add to wishlistDelete from wishlist
Cite this document
Summary
Heart attack is a condition when the blood flow to heart is blocked and if not restored quickly could cause the collapse of heart muscles leading to heart attack. Heart is a muscular organ where oxygen rich blood is carried through arteries which pump out blood to all parts of…
Download full paperFile format: .doc, available for editing
HIDE THIS PAPERGRAB THE BEST PAPER92.9% of users find it useful 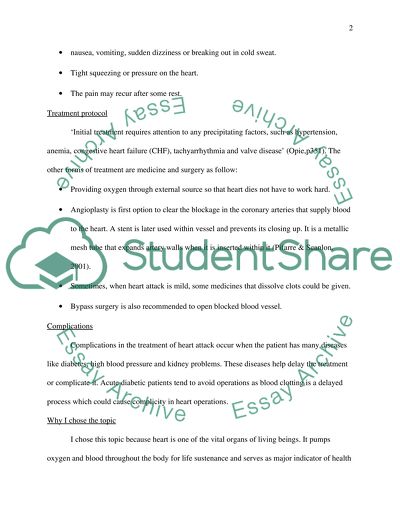 Heart attack is a condition when the blood flow to heart is blocked and if not restored quickly could cause the collapse of heart muscles leading to heart attack. Heart is a muscular organ where oxygen rich blood is carried through arteries which pump out blood to all parts of body through network of arteries and veins. When sufficient oxygen does not reach to the muscles of heart to make it work, its muscles tend to get damaged or die, resulting malfunctioning of heart or heart attack.
Cause
The main cause of the heart attack is thickening coronary arteries that reduce or block the flow of the blood to the heart muscles thus not only decreasing the supply of the blood and oxygen to the heart but also making the muscles to exert more pressure or force for the blood flow. The blockage in the artery damage heart muscles so that it is not able to function normally and lead to malfunctioning of heart or heart attack. If the blockage is not removed fast, it could be fatal and may result in the death of the person (Antman, 2011). On the inside linings of the one or more coronary arteries, plaques or atheroma develop over a period of time, which narrow the arteries thus obstructing free flow of the requisite amount of blood to the heart muscles. High cholesterol are main causes of thickening of blood vessels. If not treated timely, the thickening of arteries could block the blood flow to heart. Many times, high blood pressure also becomes key causes of heart attack.
Symptoms
Acute pain in the chest especially in the left side including left arm and may mostly lasts for more than 20 minutes.
Breathlessness and difficulty in breathing.
nausea, vomiting, sudden dizziness or breaking out in cold sweat.
Tight squeezing or pressure on the heart.
The pain may recur after some rest.
Treatment protocol
‘Initial treatment requires attention to any precipitating factors, such as hypertension, anemia, congestive heart failure (CHF), tachyarrhythmia and valve disease’ (Opie,p351). The other forms of treatment are medicine and surgery as follow:
Providing oxygen through external source so that heart dies not have to work hard.
Angioplasty is first option to clear the blockage in the coronary arteries that supply blood to the heart. A stent is later used within vessel and prevents its closing up. It is a metallic mesh tube that expands artery walls when it is inserted within it (Pifarre & Scanlon, 2001).
Sometimes, when heart attack is mild, some medicines that dissolve clots could be given.
Bypass surgery is also recommended to open blocked blood vessel.
Complications
Complications in the treatment of heart attack occur when the patient has many diseases like diabetes, high blood pressure and kidney problems. These diseases help delay the treatment or complicate it. Acute diabetic patients tend to avoid operations as blood clotting is a delayed process which could cause complicity in heart operations.
Why I chose the topic
I chose this topic because heart is one of the vital organs of living beings. It pumps oxygen and blood throughout the body for life sustenance and serves as major indicator of health and wellbeing. It is also responsible for loving relationships and promotes compassion and caring for other people. It is also chosen because when heart dies, person is also dies. (words: 567)
Reference
Antman EM. ST-segment elevation myocardial infarction: pathology, pathophysiology, and clinical features. In: Bonow RO, Mann DL, Zipes DP, Libby P, eds. Braunwalds Heart Disease: A Textbook of Cardiovascular Medicine. 9th ed. Philadelphia, Pa: Saunders Elsever; 2011:chap 54.
Opie, Lionel H. and Gersh, Bernard J.Ed. Drugs for the Heart. New Delhi. 5th ed.. Harcourt(India) Private Limited, 2001.
Pifarre’, Roque and Scanlon, Patrick, J.. 2001. Evidence Based Management of The Acute Coronary Syndrome. Philadelphia. HANLEY & BELFUS INC., 2001. Read More
Share:
Tags
Cite this document
(“Heart attack Research Paper Example | Topics and Well Written Essays - 500 words”, n.d.)
Retrieved from https://studentshare.org/miscellaneous/1587803-heart-attack

CHECK THESE SAMPLES OF Heart attack

How Can Diet Prevent Heart Attack

...? How Can Diet Help Prevent Heart Attacks? David Okolie Prof. K. Wolf Writing 303TTT1 26 April The paper aimed to look into the conceptof a healthy diet, it’s essential components, and its impact on heart disease prevention and recovery. Primarily, it highlights the important function of nutrition on preventing heart disease and allowing patients to have chances of recovery from heart-related conditions. Specific examples of foods to avoid and to consume regularly have been provided along with their effects on the levels of cholesterol and blood pressure, thereby identifying their relationships with heart disease. A number of local and...
11 Pages(2750 words)Essay

...? Attack Attack Arab-Israeli quest for peace is a worthy cause that has often been inhibited by both the Palestinians’ interests and the Israelis’ interests. Although both nationalities thirst for stability and security in the region, they are caught up fighting for their individual interests. Palestine fights for its nationalism. On the other hand, Israel maintains an iron fist in its bid to survive in a region where she is surrounded by her enemies. For that cause, Israel is willing to use oppressive and defensive measures to uphold and extend her territorial boundaries. Israel uses all possible means to ensure that the balance of power in the Middle East shifts in her favor. Palestine on the other hand...
4 Pages(1000 words)Essay

A Person Who Was Nearly Killed After a Heart Attack

...﻿ The patient who is the subject for discussion in this paper is a family friend and my father’s co-worker. He is in his mid 40s with a wife and three kids. He sufferred from a Myocardial Infarction or MI (commonly known as heart attack) accompanied by a Cerebral Vascular Attack or CVA (commonly known as “stroke“ ) three years ago which nearly killed him and rendered him paralyzed later. Many years ago, he was already warned by the doctors to watch his diet and maintain a regular exercise. He was advised to be “careful about his health” and watch his weight because he was already hypertensive and his family (both on the father and mother side) had a long history of having...
5 Pages(1250 words)Research Paper

...?HEART ATTACK Introduction A heart attack is a cardiovascular condition also referred to as myocardial infarction (MI), acute myocardial infarction, coronary occlusion or coronary thrombosis (Heart Foundation of Australia. 2012a). This condition is brought about by insufficient supply of blood or oxygen going to the heart muscle, leading to the infarction or dying of tissues. When the blood vessel develops a blood clot, it can block the arteries, which will hinder the flow of blood to the heart. Spasms, which cause the arteries to narrow, can also stop the blood supply to the heart muscle (Medical News Today. 2009). Since the heart is depended on regular supply of oxygen through the blood in order to function, the damage caused... by the...
6 Pages(1500 words)Essay

...Preventing Heart Attack Introduction: All cells in a human body require oxygen and nutritional supply to meet their energy needs. Different organs have variable energy requirements depending upon their work load. Blood is a medium by which all these essentials nutrients and oxygen for respiration are made available to these cells. If blood supply to any organ is impaired, it deprives the cells from oxygen and terminates the aerobic respiration process, such as oxidative phosphorylation, responsible for bulk of the ATP production. This initially, leads to reversible injury that can be restored to normal if hypoxia is lifted off. But if oxygen deprivation is prolonged enough it may result in permanent or...
5 Pages(1250 words)Research Paper

...? Health Benefits of Green Tea to Reduce Cholesterol, Heart Attack and Stroke The main component of green tea is Catechin, which has various diverse physiological effects. One among them is its ability to reduce cholesterol, which is a major component of fats in the body. A few studies have indicated that catechins have the ability to reduce body fat in humans. A research study was formulated to investigate the effect of catechins on body fat reduction and thus cholesterol in relation to oxidized Low Density Lipoprotein (LDL) cholesterol (Nagao et al, 2005). The reasoning behind this approach was because fat levels are directly proportional to the levels of cholesterol in the body. This research aims at identifying and describing... the...
8 Pages(2000 words)Research Paper

...? Attack Plan Introduction The modern age of computers, coupled with the increased globalization present throughout society, has certainly simplified life in many regards. In many instances, however, it has opened up vulnerabilities inside organizations that were previously unheard of. In decades past, the theft of information was almost always physical and done from within the organization building itself. The modern age of attacking company and personal information, however, has bought with it criminal activity that has no boundaries. One person thousands of miles away can wreak havoc on an entire company. Computer networks are vulnerable attack and it is wise to consider those weak...
4 Pages(1000 words)Essay

...Case study Identification problems In the case study, the confirmed disease is a heart attack. The main symptoms of a heart attack include discomfort, pressure, heaviness or pain felt in the chest, arm or below the breastbone. One may also experience irregular heartbeats and extreme weakness, anxiety and shortness of breath (Armstrong, 3). Other symptoms include discomfort exuding to the jaw, back and throat; sweating, nausea, dizziness and vomiting and feelings of heartburn. Causes of the problem The heart muscle needs a constant supply of oxygenated blood to keep it nourished. This blood is transported to the heart through the...
2 Pages(500 words)Case Study
sponsored ads
Save Your Time for More Important Things
Let us write or edit the research paper on your topic "Heart attack" with a personal 20% discount.
GRAB THE BEST PAPER

Let us find you another Research Paper on topic Heart attack for FREE!