Comments (0)
Add to wishlistDelete from wishlist
Cite this document
Summary
Accommodating the financial requirements of the education sector to provide the students with free higher education requires a lot of funding. There is a debate…
Download full paperFile format: .doc, available for editing
HIDE THIS PAPERGRAB THE BEST PAPER91.4% of users find it useful 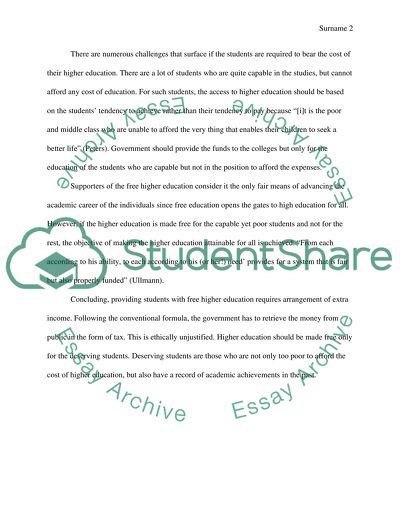 Extract of sample "Should higher education be free"

16 December Should higher education be free? For a long time, the higher education has been unaffordable for a lot of capable students (Reed and Szymanski). Accommodating the financial requirements of the education sector to provide the students with free higher education requires a lot of funding. There is a debate between the vice-chancellors and the National Union of Students (NUS) regarding the source of this funding, in which the former consider the students as the supposed source whereas the latter emphasize upon the rich public as the source (Ullmann). The best ethical solution to the problem is limiting the opportunity of free education only to the deserving yet poor students.
It is not right from an ethical perspective to retrieve the money from the general taxpayers for the higher education of all students irrespective of their ability to afford. “In a period when the state cannot afford to keep police on the streets, the NHS functioning, and our armed forces properly equipped, it is right and proper that undergraduates should be asked to pay for some of the costs of their higher education to ensure that government money is spent fairly” (Holden). Considering the benefits students gain from the degree, it is ethically justified to make the students bear the cost of education. The extent to which students should be required to bear the cost of education is debatable, yet it is very dutiful of the students to give their input for something they would get output from in the future.
There are numerous challenges that surface if the students are required to bear the cost of their higher education. There are a lot of students who are quite capable in the studies, but cannot afford any cost of education. For such students, the access to higher education should be based on the students’ tendency to achieve rather than their tendency to pay because “[i]t is the poor and middle class who are unable to afford the very thing that enables their children to seek a better life” (Peters). Government should provide the funds to the colleges but only for the education of the students who are capable but not in the position to afford the expenses.
Supporters of the free higher education consider it the only fair means of advancing the academic career of the individuals since free education opens the gates to high education for all. However, if the higher education is made free for the capable yet poor students and not for the rest, the objective of making the higher education attainable for all is achieved. “From each according to his ability, to each according to his (or her!) need’ provides for a system that is fair but also properly funded” (Ullmann).
Concluding, providing students with free higher education requires arrangement of extra income. Following the conventional formula, the government has to retrieve the money from public in the form of tax. This is ethically unjustified. Higher education should be made free only for the deserving students. Deserving students are those who are not only too poor to afford the cost of higher education, but also have a record of academic achievements in the past.
Works Cited:
Holden, Matthew. “Should Higher education be free?”1 Nov. 2010. Web. 16 Dec. 2011.
.
Peters, Alonzo. “Higher Education Should be Free.” 18 Nov. 2011. Web. 16 Dec. 2011.
.
Reed, Adolph, and Szymanski, Sharon. “Free Higher Education.” 23 Feb. 2004. Web. 16 Dec.
2011. .
Ullmann, Ben. “Should higher education really be free for all? 19 Jan. 2007. Web. 16 Dec. 2011.
. Read More
Share:
Tags
Cite this document
(“Should higher education be free Research Paper Example | Topics and Well Written Essays - 500 words”, n.d.)
Should higher education be free Research Paper Example | Topics and Well Written Essays - 500 words. Retrieved from https://studentshare.org/miscellaneous/1586910-should-higher-education-be-free

CHECK THESE SAMPLES OF Should higher education be free

...segments of African American women. For example, assuming the population segment is sufficiently large to be statistically significant which it probably would be for a national study, one could compare African American women in a higher versus lower economic quintile. single, married or divorced with dependents, availability of tuition financing and child care, etc. Comparing different female populations within the African American group should give a clearer picture of the intersecttion of factors driving their interest in university education. Conclusion It is clear that in the US females have gained a significant degree of gender equality or more, at least in terms of...
3 Pages(750 words)Essay

...are able to receive equal rights to education. Furthermore, conflict perspective in higher education also suggest that the process of tracking down teachers’ ability to deliver good quality teaching based on the prescribed school curriculum also contributes to the development of conflict relationship among the teachers (Kendall, 2010, p. 417). With this in mind, teachers who feel less important may end up having more emotional and psychological issues when building relationship with the students. In general, conflict theorists are criticizing functionalist theorists for having a strong idealization of what an educational institution should be like within...
4 Pages(1000 words)Essay

...Task Government Higher Education Policies Introduction The government provision that is charged with intellectual development and professional societal accommodation is normally through education policies. These are usually presented by an educational institution, which delivers highly qualified individuals into the competitive environment. Mostly, the education topic revolves around the advancement of children in the society to promote productivity within individuals as they grow into active societal members (Spicker, 2011). However, education is not limited to any individual as it involves a continuing process throughout an...
7 Pages(1750 words)Essay

...31 March, 2009 Contemporary issues facing higher education in England - A report. pursuing their higher education in England have a lot of issues to be content with in the present and coming academic years. The increasing inflation and the financial crisis has affected every common man and more so, every student. There are several issues one has to deal with. Those include, tuition fees of universities, debt pressures caused by it, cost of living which in turn affecting the academics of the student. To top it all, the government policies and decisions which decide on the status of all other issues. Academic pressure As per a report, students pursuing their...
6 Pages(1500 words)Essay

...The Purpose of Higher Education in Contemporary Society An Essay written by: The society of today is more interconnected than any other the earth has seen. Globalization dims the lines between our countries and allows for a free flow of ideas, information and people. A massive demand for changes in our K-12 schools spreads throughout America due largely to the fact that globalization makes it common for many cultural backgrounds to reside in a single classroom. Globalization also effects business and economy, making it harder and harder for people to find jobs in the U.S. because of the cost of overseas labor. This is a dynamic and shifting world, and people's ideals and ambitions are...
4 Pages(1000 words)Essay

...Discuss the process tenure, the politics involved, and the issues related to faculty in HIGHER EDUCATION. Tenure would consist of the right to due process, which means that a college or university cannot dismiss a professor that has already attained tenure unless they have verification that he or she is incompetent or behaves unprofessionally or that an academic department needs to be closed or the school is in serious financial difficulty, and this must hold up in court. There would only be approximately two percent of tenured faculties that may be dismissed in a typical year. It is extremely difficult to get fired from being tenure and equally as difficult to become tenure. The probationary period to...
14 Pages(3500 words)Essay

...Introduction loan debt has reached 979 billion dollars and will keep increasing for the foreseeable future (Starr par 3). Still, higher Education is becoming more essential for Americans. Nowadays, it’s almost impossible to get a decent, well-paid job with just a high school degree. The price of tuition to go to college is remains very high for the middle class. And many smart and worthy high school graduates dont get to go to college. To make it worse, interest rates are getting higher. With the endless rise of student loan debts, the lending companies are exploiting families who are in need. The United States government has to step up and take control of Higher...
5 Pages(1250 words)Essay

University education should be free

...Education should be Free Higher education is compulsory for growth, development, and prosperity. Unfortunately, in our country, the higherthe level of education, the larger its fees are. Students in their teenage or early twenties, while studying, are least capable of making money even to afford their basic living, what to talk of paying their own tuition fee. Understandably, the load of their fees has to be borne by their parents. By the time their children reach colleges and universities, most parents themselves are dealing with retirement issues. Many have the money just enough to support themselves. University...
2 Pages(500 words)Essay
sponsored ads
Save Your Time for More Important Things
Let us write or edit the research paper on your topic "Should higher education be free" with a personal 20% discount.
GRAB THE BEST PAPER

Let us find you another Research Paper on topic Should higher education be free for FREE!