Comments (0)
Add to wishlistDelete from wishlist
Cite this document
Summary
Divine providence signifies that God is the master of all things which means God has the complete control of the universe as a whole, the physical world, the affairs of nations, human birth and destiny, human successes and failures, and also the protection of His people in…
Download full paperFile format: .doc, available for editing
HIDE THIS PAPERGRAB THE BEST PAPER97.7% of users find it useful 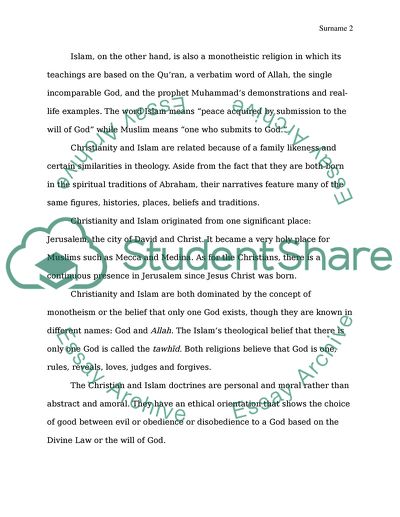 Extract of sample "Christianity and islam"

CHECK THESE SAMPLES OF Christianity and islam

...? Judaism, Christianity, and Islam, a Shared Faith Pearlie L Lewis REL/134 April 5th Vanessa Puniak M.A Judaism, Christianity, and Islam, a Shared Faith Abstract Almost the entire world is comprised of Judaism, Islam and Christianity. While I knew the link between Christianity and Judaism, I never realized Christianity and Islam could be compared at all. These three religions claim monotheism, which is the belief in the one and same God. If not for lesser details of greater complications, these religions would be precisely the same. What a unified body of worshippers that would make! But...
7 Pages(1750 words)Essay

...to fulfilling a spiritually-rich life together with Allah. Since monotheism is part of the Islamic faith, Muslims is in continuous contention with the Trinitarian God that Christian faith believes. Islam would not allow anyone or any other being for that matter to be associated with Allah for they trust that Allah is incomparable and solitary. Angels are considered as the messengers of God. The existence of angels is generally acceptable as true among Muslims. Islam agrees that God has numerous angels who are good in nature. Satan is an exception to this generalization for he is the only angel who dared to refuse the fact that God has the Ultimate Power that Satan...
2 Pages(500 words)Essay

...Introduction Throughout the ages, humans have been wondering about the great power that created the whole universe. A power that could not be fathomed, and which they felt influence their lives. Ancient temples, artifacts, and cave drawings serve as living proof to varying forms of divine worship. Yet most ancient cultures were given to polytheistic faith except for the three great religions of Judaism, Christianity, and Islam whose belief of the one true God had surpassed time. This paper aims to examine the origins of these great religions, their similarities and differences, and how they influence our sense of purpose and meaning, and the directions we are heading to. Source of Religious...
5 Pages(1250 words)Essay

Analyze Research and Assessments in Psychopathology

...Charlemagne ruled over the kingdom before its collapse (Watson, 2003). Christianity society The Frankish kingdom was a Christian dominated the western European region during the middle ages. The church played an important role in leadership and redesigning of the kingdom. Their major concept was to spread the Christianity across the kingdom and fight the insurgent of the Moore and other Islamic kingdom. Christianity was used as a toll to unite the kingdom (Moore, 2011). Christianity dictated upon the nature of leadership. Religion was also a tool in designing the initial laws. Leaders such as Charles where made strong through...
2 Pages(500 words)Essay

Violence In Christianity And Islam

...﻿Violence In Christianity And Islam Introduction If one takes a look at the human civilization, one cannot help noticing that religion has played a significant role in it. Indeed, the primary forms of it can be traced back almost up to the very dawn of emergence of the social environment. It must be noticed that at first this institute served a rather simple function: it explained the natural phenomena to the people in a way that they would find rational and acceptable. Nevertheless, as the humanity evolved, religion started dealing with more sophisticated notions such as morality. Speaking of the latter, it would not be an exaggeration to suggest the mankind was never able to fully comprehend its complex...
6 Pages(1500 words)Thesis

Comparative Analysis of Christianity and Islam

...Comparative Analysis of Christianity and Islam based on the Worldviews Spirituality influences the perception of people concerning illness, health, healing, and death. It can also be asserted that spirituality affects the worldviews held by different people. According to James Sire, “a worldview is a commitment, a fundamental orientation of the heart, that can be expressed as a story or in a set of presumptions (assumptions which may be true, partially true, or entirely false) about the basic constitution of reality and that provides the foundation on which we live and move and have our being” (Sire, 2004). This paper aims to develop a comparative analysis on the Christian (Roman Catholic) and Muslim belief system or philosophies... ,...
6 Pages(1500 words)Essay

Differences and Similarities between Christianity and Islam

...﻿Differences and Similarities between Christianity and Islam Comparing Christianity and Islam one can find not only similarities but also differences between these two religions. Despite the fact that the two religions believe in one God, each of them offers a different vision of religious matters. In some aspects, these representations are similar to each other, while in other aspects they differ. To understand the features of these two religions, one needs to consider their attitudes to such five issues as the nature and the main characteristics of God, the role of the great preachers (Jesus Christ and Mohammed), features of a righteous life, the possibility of rescue...
5 Pages(1250 words)Essay
sponsored ads
Save Your Time for More Important Things
Let us write or edit the coursework on your topic "Christianity and islam" with a personal 20% discount.
GRAB THE BEST PAPER

Let us find you another Coursework on topic Christianity and islam for FREE!