Comments (0)
Add to wishlistDelete from wishlist
Cite this document
Summary
This report looks at the financial status of Tesco Plc. In order to get a more accurate and adequate insight of its performance, it becomes important to benchmark it with a competitor that faces the same opportunities, challenges, threats, and risk. Thus, this report will compare the financial strategy and ratios of Tesco Plc with its rival J…
Download full paperFile format: .doc, available for editing
HIDE THIS PAPERGRAB THE BEST PAPER97.7% of users find it useful 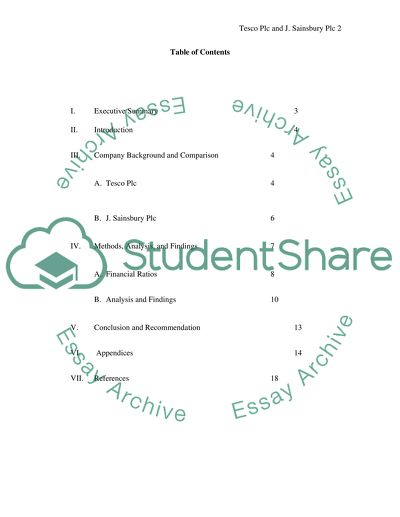 Download file to see previous pages For a potential investor, the stock of Tesco Plc is strongly recommended as better investment than its rival because it provides higher gains in the long-run.
The performance of a business organization is quantitatively reflected in its financial statements. Ascertaining the financial health of a company has become important to different decision makers like managers, stockholders, potential investors and creditors. As such, it becomes important to evaluate the financial situation of any business organization to identify their relative strengths and weaknesses. In order to accomplish this task, this report will utilize financial ratio analysis.
From its humble beginning as a one-man business in 1919, Tesco is now highly regarded for its size and strength in the global retailing industry. Tesco is engaged in international grocery and general merchandising retail chain. It is named as the largest retailer in Britain in terms of global sales and domestic market share. During 2006, it is estimated that in every 8 spent is UK retail sales, 1 is spent on Tesco indicating its strong foothold of the market (Tesco Plc 2007).
The success of Tesco is based on a fourfold long term growth strategy: "to grow the core UK business; to become a successful international retailer; to be as strong in food as in non-food; and to develop retailing services such as Tesco personal finance, Telecoms; and Tesco.com" (Tesco Plc). With this, Tesco has established presence in international markets such as Ireland, Hungary, Poland, Czech Republic, Slovakia, Turkey, Thailand, South Korea, Taiwan, Malaysia, Japan, and China and has complemented its core business with retailer service business such as online shopping, personal finance, and telecoms.
In order to comply with regulatory requirements, Tesco has adopted the International Financial Reporting Standards (IFRS) in preparing its financial statements in the fiscal year 2005 (from UK GAAP). The adoption of IFRS is expected to lower the reported turnover and net income and increase debt. As with any other business organization, the company also recognizes the presence of risks and uncertainties in its operations. Financially, Tesco is facing challenges in "the availability of fund to meet business needs, the risk of default by counter-parties to financial transactions, and fluctuations in interest and foreign exchange rates" (Tesco Plc 2007). In order to ensure fund availability, Tesco employs policy which includes smoothing the debt maturity profile, arranging funding ahead of requirements and ...Download file to see next pagesRead More
Share:
Tags
Cite this document
(“Financial Analysis of Tesco Supermarket Research Paper”, n.d.)
Financial Analysis of Tesco Supermarket Research Paper. Retrieved from https://studentshare.org/miscellaneous/1533503-financial-analysis-of-tesco-supermarket

CHECK THESE SAMPLES OF Financial Analysis of Tesco Supermarket

Perhaps one of the most conspicuous aspects of CNN is that it has an excellent contact network and reporters on the spo...
8 Pages(2000 words)Case Study
sponsored ads
Save Your Time for More Important Things
Let us write or edit the research paper on your topic "Financial Analysis of Tesco Supermarket" with a personal 20% discount.
GRAB THE BEST PAPER

Let us find you another Research Paper on topic Financial Analysis of Tesco Supermarket for FREE!