Comments (0)
Add to wishlistDelete from wishlist
Cite this document
Summary
There were unaccountable times in the recent past that I can not have and get what I felt was my need. For example, I could have gone out on a vacation for two (2) to three (3) days to give myself some time to relax and rejuvenate, but, I have not saved enough from my meager pay to spend for the occasion…
Download full paperFile format: .doc, available for editing
HIDE THIS PAPERGRAB THE BEST PAPER94.5% of users find it useful 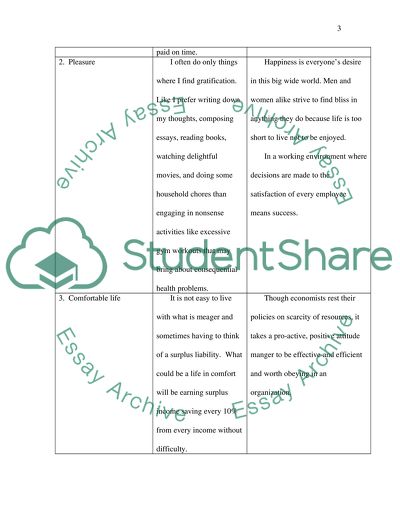 ETHICAL FILTER WORKSHEET Ethical Filter Worksheet Here of Phoenix Value Personal Source
with Examples
Justify the Value's Position in the List. Include any challenges to employing these values consistently when making personal and organizational decisions.
1. Economic
There were unaccountable times in the recent past that I can not have and get what I felt was my need. For example, I could have gone out on a vacation for two (2) to three (3) days to give myself some time to relax and rejuvenate, but, I have not saved enough from my meager pay to spend for the occasion. If I would insist on giving into the need for a vacation, it would mean sacrificing some bills that must be paid on time.
In life, I have learned that there is "no free lunch". I have to have money to buy me the goods and services to sustain my needs like food, clothing, shelter, education and entertainment.
The only challenge I could see when using this value in organizational decision making is the plan that every member of the system must have personal idea of the concepts of trade.
2. Pleasure
I often do only things where I find gratification. Like I prefer writing down my thoughts, composing essays, reading books, watching delightful movies, and doing some household chores than engaging in nonsense activities like excessive gym workouts that may bring about consequential health problems.
Happiness is everyone's desire in this big wide world. Men and women alike strive to find bliss in anything they do because life is too short to live not to be enjoyed.
In a working environment where decisions are made to the satisfaction of every employee means success.

3. Comfortable life
It is not easy to live with what is meager and sometimes having to think of a surplus liability. What could be a life in comfort will be earning surplus income saving every 10% from every income without difficulty.
Though economists rest their policies on scarcity of resources, it takes a pro-active, positive attitude manger to be effective and efficient and worth obeying in an organization.
4. Religious
I grew up in a family that prays to a supreme being more often than others. This way I have learned how to be humble, honest, grateful, sincere, patient and prudent.
Religion develops values in a person accordingly.
5. Self-respect
My sense of worth is I believe the driving force that kept me up in the ladder of success.
Confidence is very important, but often, research proved to be helpful in making personal or organizational decisions. However, in instances where immediate decisions must be made, there is nothing better that a manager who have more than enough courage to show self-esteem.
6. Social
Men and women are social beings. It is my great discomfort working around an indifferent boss.
Any deviations from normal behavior of belongingness or being aloof are a company liability. There are social graces though that people must learn in a system.
Reference
McAdams, T., Freeman, J. & Hartman L. P. (1998). Law, Business, and Society. U. S.
A: McGraw-Hill Companies.
1. Sometimes we face choices when we have little time, and possibly no preparation. What are the advantages to role-playing those situations in advance What is your action plan to avoid falling into ethical traps

...Answer I Ethics, responsibility and duty are intertwined although duty is superior to ethics. Ethical dilemmas may haunt a person, especially under stressful conditions, but the true value of human life can be accomplished only when he fulfills his duties as a human being. The ethical conduct of the Good Samaritan in the Holy Bible is in sharp contrast to the conduct of the actors in SADHU, when duty was the primary responsibility in both cases. The Samaritan in the Holy Bible was also just another passer-by like the trekkers in SADHU but he behaved unlike these trekkers and also did not ignore his duties as a human being. The priest and the temple assistant are supposed to be in service of the Lord but they did not understand...
6 Pages(1500 words)Assignment

Mark Pastin in his book, ‘The Hard Problems of Management: Gaining the Ethics Edge’, has attempted to summarize this by providing four principles that are necessary in order for an organization to be ethical. The organization must interact with all stakeholders with...

As a practitioner, the nurse attends to all the medical needs of the patient and as a leader, she takes decisions that relate to, influence and facilitate the actions of others with an aim to achieve a particular goal. As a researcher, the nurse aims to implement studies to determine the actual effects of nursing care and to work towards further improvement in nursing care (Nettina, 2006). In order to impart these duties in the most appropriate manner, nurses must not only possess sound knowledge of the subject, but they must also be aware of ethical laws and legislations and how to handle ethical dilemmas. This is because, through their career, nurses encounter many situations that are tangled in ethical complexities. As Hall (19...
9 Pages(2250 words)Article
sponsored ads
Save Your Time for More Important Things
Let us write or edit the essay on your topic "Ethical filter worksheet" with a personal 20% discount.
GRAB THE BEST PAPER

Let us find you another Essay on topic Ethical filter worksheet for FREE!