Comments (0)
Add to wishlistDelete from wishlist
Cite this document
Summary
Murderball, released in 2005, is probably one of the finest and most original documentaries of the decade. The best thing about the movie is its sheer originality and its courage to portray the lives of those who we have termed disabled. The movie was largely inspired by Dana Adam Shapiro's article Murderball and interestingly the writer was also on the team of producers for the movie.
…
Download full paperFile format: .doc, available for editing
HIDE THIS PAPERGRAB THE BEST PAPER93.7% of users find it useful 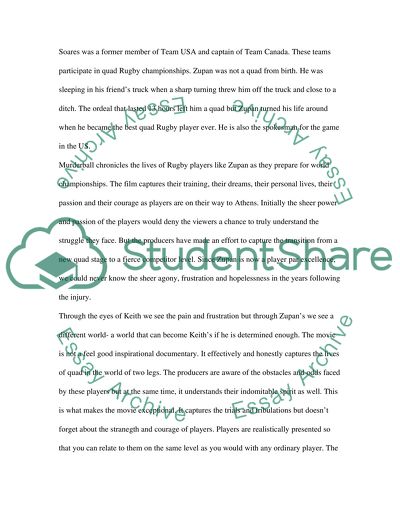 MURDERBALL Murderball, released in 2005, is probably one of the finest and most original documentaries of the decade. The best thing about the movie is its sheer originality and its courage to portray the lives of those who we have termed disabled. The movie was largely inspired by Dana Adam Shapiro's article Murderball and interestingly the writer was also on the team of producers for the movie.
Murderball narrates the story of fierce Rigby players who lost the functioning of their limps due to accidents and thus became quadriplegic. Having lost all four limps, these players are confined to wheelchairs but the movie shows that they are not invalid or disabled as people generally assume. They can live independently and enjoy all the normal activities, like driving, cooking and having sex. The movie takes you on an emotional ride that stirs some deep sentiments but manages to shatter many misconceptions we have about disabled. The story is not about people confided to wheelchairs but people who never thought their lives would come to this, of people who were fiercely competitive, people who believed in smashing, crashing, hitting and just feeling the extreme adrenalin rush on a daily basis. When these people had to come to terms with reality, one can imagine what a bleak reality that must have been. But then they discovered quad Rugby and their lives changed for the better.
The story revolves around Joe Soares, Zupan and Keith. Keith was a Rugby player who had just had a serious accident that smashed his motorbike and left him a quadriplegic. Soares was a former member of Team USA and captain of Team Canada. These teams participate in quad Rugby championships. Zupan was not a quad from birth. He was sleeping in his friend's truck when a sharp turning threw him off the truck and close to a ditch. The ordeal that lasted 13 hours left him a quad but Zupan turned his life around when he became the best quad Rugby player ever. He is also the spokesman for the game in the US.
Murderball chronicles the lives of Rugby players like Zupan as they prepare for world championships. The film captures their training, their dreams, their personal lives, their passion and their courage as players are on their way to Athens. Initially the sheer power and passion of the players would deny the viewers a chance to truly understand the struggle they face. But the producers have made an effort to capture the transition from a new quad stage to a fierce competitor level. Since Zupan is now a player par excellence, we could never know the sheer agony, frustration and hopelessness in the years following the injury.
Through the eyes of Keith we see the pain and frustration but through Zupan's we see a different world- a world that can become Keith's if he is determined enough. The movie is not a feel good inspirational documentary. It effectively and honestly captures the lives of quad in the world of two legs. The producers are aware of the obstacles and odds faced by these players but at the same time, it understands their indomitable spirit as well. This is what makes the movie exceptional. It captures the trials and tribulations but doesn't forget about the stranegth and courage of players. Players are realistically presented so that you can relate to them on the same level as you would with any ordinary player. The players are not always presented as saints. Their weaknesses, their shortcoming and their negative traits are all there along with their courage, their strength and their dreams. The movie is made in a true documentary style but players get to speak for themselves instead of someone else taking over. This adds a very personal dimension to the documentary and makes it worth your time. Read More
Share:
Tags
Cite this document
(“Murderball Movie Review Example | Topics and Well Written Essays - 500 words”, n.d.)
Retrieved from https://studentshare.org/miscellaneous/1529307-murderball

CHECK THESE SAMPLES OF Murderball

How have African-Americans Worked to End Segregation, Discrimination, and Isolation to Attain Equality and Civil Rights

... their own path of personal evolution. Homosexuals are being removed from the screen and the disabled people are denied of masculinity. Works Cited Barounis, C. "Cripping Heterosexuality, Queering Able-Bodiedness: Murderball, Brokeback Mountain And The Contested Masculine Body." Journal of Visual Culture 8.1 (2009): 54-75. Print. Collins, Patricia. Black Feminist Thought Knowledge, Consciousness, and the Politics of Empowerment. New York, NY: Routledge, 2000. Print. Lee, Robert G. Asian American Studies Now a Critical Reader. Ed. Jean Yu Wu. New Brunswick, N.J.: Rutgers UP, 2010. Print.... ved of this opportunity. Similar issues are raised in the documentary Murderball. The plot of it shows the gap between the perceived conventional...
4 Pages(1000 words)Essay
sponsored ads
Save Your Time for More Important Things
Let us write or edit the movie review on your topic "Murderball" with a personal 20% discount.
GRAB THE BEST PAPER

Let us find you another Movie Review on topic Murderball for FREE!