Comments (0)
Add to wishlistDelete from wishlist
Cite this document
Summary
Oppression by definition means condition of being ruled by unjust or cruel government. However there are also other kinds of oppression, and no matter which kind of oppression we are talking about when it comes to poetry, it must be said that many poets in different times throughout history have written about oppression…
Download full paperFile format: .doc, available for editing
HIDE THIS PAPERGRAB THE BEST PAPER96.2% of users find it useful 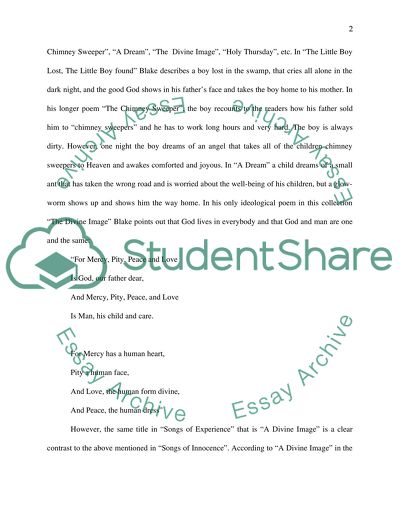 Extract of sample "Oppression in Poetry"

Download file to see previous pages His poetry is characterized with his insisting on total freedom for the individual, thus expressing his rebel and revolutionary spirit. His rebellion is directed toward two things. First, he rebels against kings, tyrants, clergy, etc. His collection "Songs of Innocence, Songs of Experience" consists actually of two collections, but Blake himself combined and joined them in one under the title "Songs of Innocence and of Experience, showing the Two Contrary States of the Human Soul". In his "Songs of Innocence" Blake sees the world through the eyes of an innocent child, that is, children see only the sunshine and do not notice the dark clouds, meaning that children know only of joy, laughter and happiness. Some of the poems that deal with this subject are "The Little Boy Lost, The Little Boy Found", "The Chimney Sweeper", "A Dream", "The Divine Image", "Holy Thursday", etc. In "The Little Boy Lost, The Little Boy found" Blake describes a boy lost in the swamp, that cries all alone in the dark night, and the good God shows in his father's face and takes the boy home to his mother. In his longer poem "The Chimney Sweeper", the boy recounts to the readers how his father sold him to "chimney sweepers" and he has to work long hours and very hard. The boy is always dirty. However, one night the boy dreams of an angel that takes all of the children chimney sweepers to Heaven and awakes comforted and joyous. In "A Dream" a child dreams of a small ant that has taken the wrong road and is worried about the well-being of his children, but a glow-worm shows up and shows him the way home. In his only ideological poem in this collection "The Divine Image" Blake points out that God lives in everybody and that God and man are one and the same:
"For Mercy, Pity, Peace and Love
Is God, our father dear,
And Mercy, Pity, Peace, and Love
Is Man, his child and care.
For Mercy has a human heart,
Pity a human face,
And Love, the human form divine,
And Peace, the human dress"
However, the same title in "Songs of Experience" that is "A Divine Image" is a clear contrast to the above mentioned in "Songs of Innocence". According to "A Divine Image" in the "Songs of Experience", man is the bearer of evil passions as much as he is the bearer of virtues in the poem under the same title in "Songs of Innocence".
"Cruelty has a Human Heart,
And Jealousy a Human Face;
Terror the Human Form divine,
And Secrecy the Human Dress."
Here we can understand "jealousy" as "envy" and this personification has its origin in the Old Testament idea about the "jealous God" who envies its creatures, that God to Blake is the devil himself, or the principle of evil.
We can also compare another poem under the same name in the two collections and that is "Holy Thursday". While in "Songs of Innocence" this poem presents the Christian message of Charity to those in need, to the poor through the characters of children on a holiday procession lead by distinguished elders, and the children are happy, dressed in clothes of vivid colors, their song reaches the sky, and the elders are all wise, good, dignified, in "Songs of Experience" it has no similarity to the first one, that is, it is totally different and it presents a severe protest against oppression, misery of children, etc, ...Download file to see next pagesRead More
Share:
Tags
Cite this document
(“Oppression in Poetry Book Report/Review Example | Topics and Well Written Essays - 1500 words”, n.d.)
Retrieved from https://studentshare.org/miscellaneous/1521820-oppression-in-poetry

CHECK THESE SAMPLES OF Oppression in Poetry

The Power of Poetry

...? The Power of Poetry in ‘Aunt Jennifer’s Tigers’ by Adrienne Rich Poetry is perhaps the most special way of using language. Unlike prose, poetry is bound by certain formal considerations – even the most radical of free verse poets, have a ‘method in their madness’, a particular logic to their work that gives the piece a rhythm of its own. It is quite difficult to tell apart good poetry from bad – even if one were to manage the even more difficult task of deciding what makes poetry good or bad – and this is where the craft of the poet assumes great significance. Lines in good poetry are set down after much revising and are usually not...
5 Pages(1250 words)Essay

...Edgar Allan Poe and Close Reading Response to “The Raven” and “The Lake” Born the year 1809 in Boston, MA to parents who separated during his early youth, Edgar Allan Poe grew up with a natural passion for writing and profound thoughts despite financial crisis and personal conflicts with the guardians who took custody of him until the stage of full independence. Though reared to become involved in corporate matters by the Allans, his foster parents, Poe had been more inclined to engage himself in the literary endeavor of writing poetries and short stories that depict themes of horror and mystery. It serves as an interesting piece of information to learn that Poe regarded poetics with a value significantly higher than the...
5 Pages(1250 words)Essay

...Pedagogy of the Oppressed “Pedagogy of the Oppressed” is a book written by Paul Freire in the year 1968. In the book, Freire avails a theory of education in a revolutionary struggle context. The theoretical model in this book is that of dialectical materialism. This is a theory with the idea that the destiny of human beings will be settled in a grapple between two economic classes namely the owners and laborers or oppressors and the oppressed. This paper aims at conducting a critical applying the ideological and theoretical assertions in this book. “The Broken Spears” refers to a book with a collection of many accounts of the destruction of Mexico Cortes and the conquerors in their...
7 Pages(1750 words)Essay

...? Analysis of Love Lyrics in Poetry and Song Both the song by Guns and Roses, November Rain and Love Poem by John Frederick Nims are written about love. However, they both take a different viewpoint and the narrators are very different in age and the relationship is different. In the song, the singer is trying to convince the object of his love to reassure him that their love still flourishes and she will stay. This is confirmed by the other two songs in the trilogy and some comments by Axl Rose in interviews, as fans discuss ("Guns N' Roses - November Rain Lyrics | SongMeanings."). In the poem, the narrator is speaking to the love of his life and identifying the things he loves most about her, secure in a long term relationship... regular,...
4 Pages(1000 words)Admission/Application Essay

...Running Head: OPPRESSION LIES IN THE INVALIDATION OF EXPERIENCE Oppression Lies In The Invalidation Of Experience of the of the Institution] Oppression Lies In The Invalidation Of Experience Introduction: Oppression The type of oppression that is imposed by nature is well known. It consists of the pains of sickness, the weaknesses of old age, the various liabilities of the body (its limited capabilities, infirmities, or degenerations), and all such stress-causing factors. "Oppres'd with two weak evils, age and hunger" was Shakespeare's formulation of the more hostile effects of nature on humans (As You Like It, act 2, scene 7, line 132). Studies in the area of natural sciences successfully analyze the whole kaleidoscope... of these...
20 Pages(5000 words)Essay

.... Prudella (who actually lacks prudence), Mrs. Candour (who does not display openness), and Miss Prim (who is too formal) etc are suggestive of their personal characteristics. Within no time, one finds the ladies engaging themselves in cards playing and it is evident from their conversations that none of them took writing seriously and they just wanted to express their prejudiced whims and fancies on the issue. The poetess makes their follies revealed and it makes the reader in a comfortable position to pass his/ her judgments on these ridiculous characters. The derogative expressions and the diction used to refer to the servant girl writer in the poem remind one of the eighteenth century plebeian poetry that depicted...
6 Pages(1500 words)Book Report/Review

...Nelma Ferreira March 28, Poetry Reflection “Any healthy man can go without food for two days - butnot without poetry”. - Charles Baudelaire Poetry is a soothing tool with the help of which one can calm down one’s disturbed soul. I am also in love with poetry and poetic diction, and this love pulled me to attend a poetic session in the Rice University. Here is my perspective about some of the poems I listened to, when I attended an event in the Rice Gallery at the Rice University on March 7, 2012. As I understand it, the poem, ‘Lost in Space’, by D. Trinidad Hanks, mentions the link between how gymnastics play in front of us, and how they lead their emotional lives....
2 Pages(500 words)Essay

...Bruce Flohr ENG 104 March 30th War as a Theme in Two Poems from World War I War is as old as mankind, and so is poetry, so it should come as no surprise that war is often used as a theme in poetry. Usually of course poetry was used as a way to make war seem attractive to young men who would fight for their country. But starting in World War I there was a greater movement towards anti-war poetry as the young men who went to war were often more educated and felt very shocked by it. This contrast can be very clearly seen by comparing Wilfred Owens "Dulce et Decorum Est" with Edward Thomass "This is No Petty Case of Right or Wrong," both of which were written during World...
2 Pages(500 words)Essay

...Oppression Oppression is the process of practicing ity power or ity in a cruel, unjust manner or burdensome way. Alternatively it may be defined as instance or act of oppressing, being in an oppressed state and that feeling of physically or mentally heavily burdened by adverse conditions, troubles, anxiety and people.  In this paper will concentrate on three types of oppression: social, institutionalized and systematic oppression (Dalrymple et al., pp. 40). Social oppression This is a type of oppression that is socially related like group, individual, or category exploitation, supported...
4 Pages(1000 words)Term Paper

...Essay, Annotated bibliography 30 March The aim of this paper is to provide an overview of the African American resistance to oppression by the white population as seen in various poetry work in the past decades. The paper will discuss various opinions aired in the literary works that have analysed this poems in the past. The discussion will then Shields, John C, and Eric D. Lamore. New Essays on Phillis Wheatley. Knoxville: University of Tennessee Press, 2011. Print. The New Essays on Phillis Wheatley was written by both Shields and Eric and has analysed various poetry work from poets especially in 17th century as is the case of Wheatley Phillis’ “On the Death Wooster”. On the their...
6 Pages(1500 words)Annotated Bibliography
sponsored ads
Save Your Time for More Important Things
Let us write or edit the book report/review on your topic "Oppression in Poetry" with a personal 20% discount.
GRAB THE BEST PAPER

Let us find you another Book Report/Review on topic Oppression in Poetry for FREE!