Comments (0)
Add to wishlistDelete from wishlist
Cite this document
Summary
In the article of the New York Times, Claudia Parsons cites Steve Priest, president of Ethical Leadership Group, who eloquently sums up what can be justly called as modern crisis of accounting ethics: “Investors don’t trust the companies they’re investing in…
Download full paperFile format: .doc, available for editing
HIDE THIS PAPERGRAB THE BEST PAPER96.3% of users find it useful 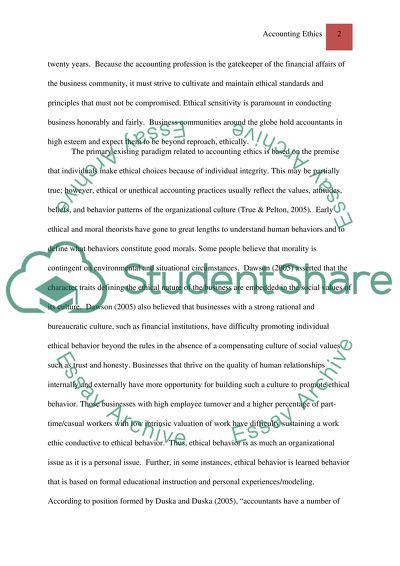 Download file to see previous pages They don’t trust the financial statements, they don’t trust the audits, they don’t trust the bond rating agencies.” Indeed, contemporary profession of accountancy has been continuously wrestling with how to improve ethics in the profession. In the wake of prominent accounting scandals such as Enron, WorldCom, Tyco, and Arthur Andersen, the accounting profession in general and accounting ethics in the main has received both public’s and regulator’s glare. In 2002 the U.S. Congress responded to this dilemma with enactment of The Sarbanes-Oxley Act. However, when it seemed the regulatory field for adherence to accounting standards and ethics had been prepared, the world witnessed yet another crisis of accounting ethics triggered by unnoticed 50 billion Ponzi scheme invented and managed by Bernard Madoff for almost twenty years. Because the accounting profession is the gatekeeper of the financial affairs of the business community, it must strive to cultivate and maintain ethical standards and principles that must not be compromised. Ethical sensitivity is paramount in conducting business honorably and fairly. Business communities around the globe hold accountants in high esteem and expect them to be beyond reproach, ethically.
The primary existing paradigm related to accounting ethics is based on the premise that individuals make ethical choices because of individual integrity. This may be partially true; however, ethical or unethical accounting practices usually reflect the values, attitudes, beliefs, and behavior patterns of the organizational culture (True & Pelton, 2005). Early ethical and moral theorists have gone to great lengths to understand human behaviors and to define what behaviors constitute good morals. Some people believe that morality is contingent on environmental and situational circumstances. Dawson (2005) asserted that the character traits defining the ethical nature of the business are embedded in the social values of its culture. Dawson (2005) also believed that businesses with a strong rational and bureaucratic culture, such as financial institutions, have difficulty promoting individual ethical behavior beyond the rules in the absence of a compensating culture of social values such as trust and honesty. Businesses that thrive on the quality of human relationships internally and externally have more opportunity for building such a culture to promote ethical behavior. Those businesses with high employee turnover and a higher percentage of part-time/casual workers with low intrinsic valuation of work have difficulty sustaining a work ethic conductive to ethical behavior. Thus, ethical behavior is as much an organizational issue as it is a personal issue. Further, in some instances, ethical behavior is learned behavior that is based on formal educational instruction and personal experiences/modeling. According to position formed by Duska and Duska (2005), "accountants have a number of ethical responsibilities, to themselves, their families, and their profession as well as to the clients and company for which they work" (p. 30). Practically, most of accounting crises occurred in past primarily due to CEOs not adhering to the rules and regulations of the accounting practices as well as the U.S. Security Exchange Commission requirements.
According to Healy-Burress (2010), "a professional code of conduct explicitly states the expectations of behavior and character for the members of the profession" (p.57). Therefore, a professional code of ethics that is followed by participants represents a defining feature of a profession, and the major document which formulates the ethical conduct of accounting ...Download file to see next pagesRead More
Share:
Tags
Cite this document
(“Accounting Ethics Can Make the Difference Reasons why Morals are Key Research Paper”, n.d.)
Accounting Ethics Can Make the Difference Reasons why Morals are Key Research Paper. Retrieved from https://studentshare.org/miscellaneous/1517541-accounting-ethics-can-make-the-difference-reasons-why-morals-are-key-components

An organization uses an efficient code of ethics for many purposes: although two important ones are: A code of ethics should 1) explain gray areas or queries employees have regarding organizational principles and opportunists and 2) assist in building confidence and dedication (Kenneth, 1998).
Codes of ethics are considered to increase ethical potential, Legitimize discussion regarding ethical matters, support ethical judgment, and stay away from bad behavior supply a foundation for enforcement, responsibility and accountability provisions (Akula, 2000).
One thing that differs for IT professionals, though, is the amount and multiplicity of codes of conduct that the IT professional may pass on to in their attempt to achie...
13 Pages(3250 words)Assignment

The classification needs to be made at the inception of the lease itself. Risk, with respect to leasing, refers to the possibility of loss arising on account of under-utilization or technological obsolescence of the asset. Reward means the incremental net cash flows that are generated from the usage of the asset over its economic life and the realization of the anticipated residual value on expiry of the economic life. A lease which cannot be classified as a finance lease is known as an operating lease. In the following situations a lease is classified as Finance lease:
The lower of the present value of minimum lease payments and the fair value of the asset is recognized as an asset and liability. The minimum lease payments a...
6 Pages(1500 words)Assignment

Reasons for Decline of Superannuation Fund

The growth in assets has been negative but the investments in other funds such as cash and fixed assets remain strong and gave benefits. However these benefits are outweighed by losses in other investments, such as shares, and the portfolio of investments registers negative growth. The investment market is volatile and subject to change, and when the markets go down, there is also a time for recovery. But can the superannuation pensioners afford to wait?

The Australian superannuation fund has been through significant developments in the past 10 years It was financially strong and well placed before the global crisis. However, the industry has been shaken, like others in the world, by the financial crisis. The industry e...
10 Pages(2500 words)Coursework

...Opinion paper The Declaration of Helsinki by the WHO clearly s that in clinical trials involving humans the wellbeing of the should be of prime importance than the interest of science or society. This has been stated because at times in order to achieve the objectives of a study the investigators might overlook the welfare of the trial subjects thus jeopardizing their health in the process. According to ethical rules while comparing two treatment options the control group of the study must receive the best known treatment available while the study subjects are given a potential newer treatment. Only when there is no effective treatment available a placebo-controlled group can be used for the study. There have been several trials which have...
7 Pages(1750 words)Essay

The chemically-impaired nurse is a nurse who has a substance-addiction problem. These substances include drugs and/or alcohol. These nurses usually have impaired functions because of their addiction to drugs or alcohol and their nursing practice is often compromised as a result of their addiction (Ellis & Hartley, 2004). A study conducted by Sullivan and colleagues in the 1980s revealed that substance addiction problems are about as great as the percentage for substance addiction in the general population (as cit...
7 Pages(1750 words)Coursework
sponsored ads
Save Your Time for More Important Things
Let us write or edit the research paper on your topic "Accounting Ethics Can Make the Difference Reasons why Morals are Key Components" with a personal 20% discount.
GRAB THE BEST PAPER

Let us find you another Research Paper on topic Accounting Ethics Can Make the Difference Reasons why Morals are Key Components for FREE!