Comments (0)
Add to wishlistDelete from wishlist
Cite this document
Summary
We are fighting a game we do not know how to win. With all of its tactical difficulties and strategical problems, the war in Afghanistan is a war that we should not be willing to lose, but it is going to probably happen that we will lose anyway since for the most part we really don't know what we're doing over there.
…
Download full paperFile format: .doc, available for editing
HIDE THIS PAPERGRAB THE BEST PAPER95.9% of users find it useful 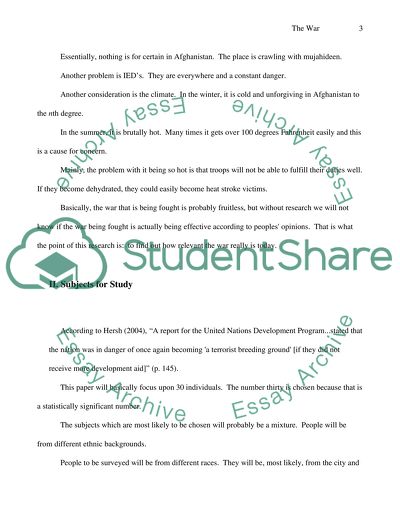 Extract of sample "War in Afghanistan"

CHECK THESE SAMPLES OF War in Afghanistan

Afghanistan War and the Export of Heroin

Afghanistan seemed to be big in the United State’s national security policy in the 1980s. The Soviet Union attacked and invaded Afghanistan in 1979, this war turned into an unwinnable guerrilla war. Thus, the strategic policy of America considered Afghanistan as a battleground where the Soviet military machine possibly will be badly defeated and to America, it was a time to arouse domestic dissatisfaction by means of a conflict that could extremely unpopular as well as expensive. The pictures of Afghans that were shown in America in the 1980s depicted them as brave and courageous people, who were fighting to get back their sovereignty from the clutches of the Soviet bear. The rebels of Afghanistan, the mujahideen, were thoug...
9 Pages(2250 words)Assignment

As it is popularly known in this time, the name Mark Twa...

Said (2001), on the other hand, repudiates Huntington’s views on the clash of civilizations; he purports that Huntington failed to see the ‘internal dynamics and plurality of every civilization’ and that Huntington’s views on civilization and the west-Islam conflict stem from ‘downright ignorance’. Said is...
10 Pages(2500 words)Assignment
sponsored ads
Save Your Time for More Important Things
Let us write or edit the research paper on your topic "War in Afghanistan" with a personal 20% discount.
GRAB THE BEST PAPER

Let us find you another Research Paper on topic War in Afghanistan for FREE!