Comments (0)
Add to wishlistDelete from wishlist
Cite this document
Summary
Postoperative wound infection is an important complication following surgery. The wound may be contaminated before surgery, during surgery, or following surgery being infected during healing. The skin is considered to be body's first line of defense, and surgery in itself is a mutilative procedure, where this defense may be violated…
Download full paperFile format: .doc, available for editing
HIDE THIS PAPERGRAB THE BEST PAPER92% of users find it useful 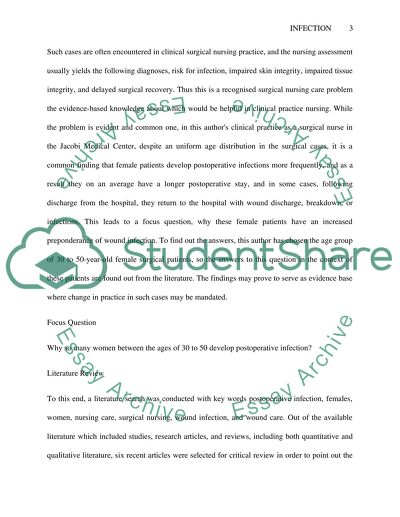 Download file to see previous pages Due to some violation of safety precautions before, during, and after surgery, these or other freshly colonized bacteria in the hospital environment may enter the wound and cause infection, where bacteria now easily penetrate the wounded skin. As mentioned earlier, injury and inflammation caused by surgical manipulation may also help the nosocomial bacteria enter into the wound after being transmitted from somewhere else from within the hospital environment. In effect such infections in the surgical wound would slow down the approximation of the wound edges, delay wound healing, lead to morbidity, and cause increased economic burden, increased hospital stay, and increased incidence of other infections. Usually the patients present with increased pain in the surgical wound as a result of inflammatory process early in the infection, redness at the wound margins that spreads unless treated, drainage from the wound margin, fever due to infection, and ultimately breakage of the wound (Pryor et al., 2004).
Such cases are often encountered in clinical surgical nursing practice, and the nursing assessment usually yields the following diagnoses, risk for infection, impaired skin integrity, impaired tissue integrity, and delayed surgical recovery. Thus this is a recognised surgical nursing care problem the evidence-based knowledge about which would be helpful in clinical practice nursing. While the problem is evident and common one, in this author's clinical practice as a surgical nurse in the Jacobi Medical Center, despite an uniform age distribution in the surgical cases, it is a common finding that female patients develop postoperative infections more frequently, and as a result they on an average have a longer postoperative stay, and in some cases, following discharge from the hospital, they return to the hospital with wound discharge, breakdown, or infections. This leads to a focus question, why these female patients have an increased preponderance of wound infection. To find out the answers, this author has chosen the age group of 30 to 50-year-old female surgical patients, so the answers to this question in the context of these patients are found out from the literature. The findings may prove to serve as evidence base where change in practice in such cases may be mandated.
Focus Question
Why so many women between the ages of 30 to 50 develop postoperative infection
Literature Review
To this end, a literature search was conducted with key words postoperative infection, females, women, nursing care, surgical nursing, wound infection, and wound care. Out of the available literature which included studies, research articles, and reviews, including both quantitative and qualitative literature, six recent articles were selected for critical review in order to point out the evidence available. It is to be mentioned that although the assignment requirement only mentions nursing literature, it would not be prudent to include only nursing literature since the cause of surgical site infection may also lie in the operating room management and handling of the skin, the magnitude of the operative procedure, the technical dexterity of the surgical team, and safety protocol ...Download file to see next pagesRead More
Share:
Tags
Cite this document
(“Development of Postoperative Infection in Women between the age of 30 Research Paper”, n.d.)
Development of Postoperative Infection in Women between the age of 30 Research Paper. Retrieved from https://studentshare.org/miscellaneous/1507474-development-of-postoperative-infection-in-women-between-the-age-of-30-to-50

“Development of Postoperative Infection in Women Between the Age of 30 Research Paper”, n.d. https://studentshare.org/miscellaneous/1507474-development-of-postoperative-infection-in-women-between-the-age-of-30-to-50.
Comments (0)
Click to create a comment or rate a document

The Declaration of Helsinki by the WHO clearly states that in clinical trials involving humans the wellbeing of the subject should be of prime importance than the interest of science or society. This has been stated because at times in order to achieve the objectives of a study the investigators might overlook the welfare of the trial subjects thus jeopardizing their health in the process. According to ethical rules while comparing two treatment options the control group of the study must receive the best-known treatment available while the study subjects are given a potential newer treatment. Only when there is no effective treatment available a placebo-controlled group can be used for the study. There have been several trials th...
7 Pages(1750 words)Essay
sponsored ads
Save Your Time for More Important Things
Let us write or edit the research paper on your topic "Development of Postoperative Infection in Women between the age of 30 to 50" with a personal 20% discount.
GRAB THE BEST PAPER

Let us find you another Research Paper on topic Development of Postoperative Infection in Women between the age of 30 to 50 for FREE!