Comments (0)
Add to wishlistDelete from wishlist
Cite this document
Summary
Madagascar has developed ecotourism and is now moving towards sustainable tourism sector. Overall tourism industry is the second largest foreign exchange earner for the economy of Madagascar. However, with little progress, their lies threats and problems which hinders the total economic development of the madagasy economy…
Download full paperFile format: .doc, available for editing
HIDE THIS PAPERGRAB THE BEST PAPER97.2% of users find it useful 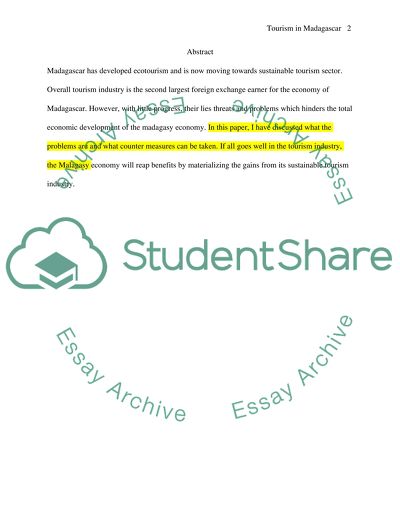 Extract of sample "Tourism in Madagascar"

Download file to see previous pages People are not seeing Madagascar as a sustainable tourism spot. There lies the confusion. Ecotourism is defined as the travel to the destinations of the world where flora, fauna, and cultural heritage are existent. They are the primary attractions for the tourists. They aim at minimizing the negative effects that are mostly caused due to traditional tourism on the natural environment (Butler, 2005).
Sustainable tourism on the other hand focuses on bringing benefits to the local people, the environment and the economy. The concept of sustainable tourism has been slower in Madagascar, mainly due to the fact that people tour with an aim of seeing a natural environment (eco tourism). Madagascar's main originating market has been France. It is still unable to furnish products which are for sustainable tourism market, rather then just for ecotourism (Butler, 2005).
Madagascar is located on the south-east coast of the African continent. Madagascar is the fourth largest island. It is larger than the States of California and Oregon. The island extends 100 miles in length and 360 miles in width. This democratic country lies in the Indian Ocean and is among the world's poorest countries.
Madagascar, as being among the poorest countries, is mostly engaged in agriculture at a subsistence level. Citizens do not have options of choosing their desire career path. They have to dwell in whatever they have. They have to spend their life in whatever limited resources they can find. This poverty is causing crucial harm not only to the people living in Madagascar, but also to the endemic biodiversity of Madagascar. At present, the Madagascar's biodiversity need the presence of good tourist, tourist who will respect, care, and play a responsible role in saving the Madagascar's treasure of biodiversity. (Butler, 2005)
If an individual is enthusiastic and looking for the unexpected, if one wants to meet an extraordinary people, then he or she must go and discover this fascinating island. That individual will certainly agree with the characterization made by world-explorer Dervla Murphy: "Apart from the Tibetans, I have never traveled among a people as endearing as the Malagasy." You will become attached to the country, verifying once more the Malagasy proverb: "They who drink the water from the Manangareza River always come back to Madagascar" (Mittermeier, 1988).
Economy
Madagascar is dominated by the agricultural sector. However with the establishment of a duty free export processing zone in 1990, there has been an increase in light manufacturing, particularly textile manufacturing and agricultural products processing (cf. Gossling and Jiddawi 2004). Despite the existence of natural tourist spots, biodiversities and cultural heritage, Madagascar is still among the poorest countries. The reasons ...Download file to see next pagesRead More
Share:
Tags
Cite this document
(“Tourism in Madagascar Term Paper Example | Topics and Well Written Essays - 3250 words”, n.d.)
Tourism in Madagascar Term Paper Example | Topics and Well Written Essays - 3250 words. Retrieved from https://studentshare.org/miscellaneous/1507120-tourism-in-madagascar

CHECK THESE SAMPLES OF Tourism in Madagascar

... Comparisons between Tourism Websites Introduction Tourism websites are e-commerce web portals that are aimed at making the tourism sites, hotels and restaurants sell highly in comparison with other competitors, ensure trust to the online visitors, and always are for efficient and effective communication between business and business and business and customers. 1.1. Informative The biggest issues leading to customers’ disputes regarding the e-commerce services include any discrepancies between the advertised qualities of the tourisms’ merchandise or services and the perceptions customers get upon receiving such offered services and goods, possible and easy reach to the tourism industries’ customer care support by the customers...
6 Pages(1500 words)Term Paper
sponsored ads
Save Your Time for More Important Things
Let us write or edit the term paper on your topic "Tourism in Madagascar" with a personal 20% discount.
GRAB THE BEST PAPER

Let us find you another Term Paper on topic Tourism in Madagascar for FREE!