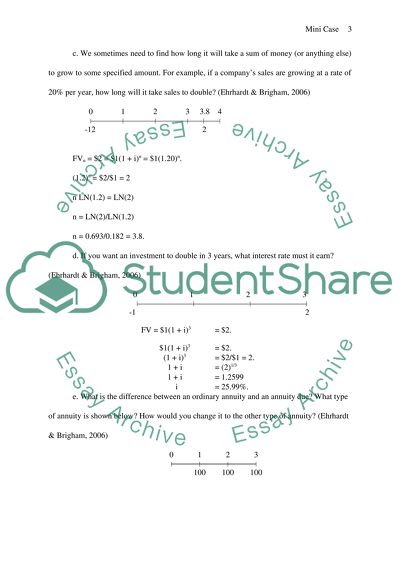 ...Running Head: Mini case Module Six Mini Case of the of the of the . Module Six MiniCase a. What is capital budgeting (Ehrhardt & Brigham, 2006) Capital budgeting is the process of analyzing projects and deciding whether they should be included in the capital budget or not. This process is of fundamental importance to the success or failure of the firm as the fixed asset investment decisions chart the course of a company for many years into the future. In the process, managers firstly estimate the cash flows, then they assess the risk associated with the cash flows, then they determine the cost of capital. Finally, managers evaluate the cash flows, and then decide which projects to include in the capital budget. b. What is the difference...
11 Pages(2750 words)Essay

...Running Head: minicase Module Five Mini Case of the of the of the . Module Five Mini Case a. Describe briefly the legal rights and privileges of common stockholders (Ehrhardt & Brigham, 2006). Common stockholders are owners of the company, though of a very small part. As they own the company, they have the right to vote and elect the board of directors. Secondly they have the preemptive right, i.e. the right to buy any additional shares issued by the company. b. (1) Write out a formula that can be used to value any stock, regardless of its dividend pattern (Ehrhardt & Brigham, 2006). = (2) What is a constant growth stock How are constant growth stocks valued (Ehrhardt & Brigham, 2006) Constant growth stocks are stocks whose dividends...
6 Pages(1500 words)Essay

...Part A What is meant by the term ‘Distribution Policy’? Distribution Policy refers to the policies set down by the firms in regards to the levelsof distribution, the forms of distribution and also the stability of distribution. This has been defined by the term as “A corporate policy outlining how messages and data can be shared and distributed throughout the various divisions and departments of the company. A companys distribution policy can also affect how documents are filed” (Business Dictionary, 2009). 2. The terms “irrelevance,” “bird-in-the-hand,” and “tax preference” have been used to describe three major theories regarding the way dividend payouts affect a firm’s value. Explain what these terms mean, and briefly describe each...
4 Pages(1000 words)Essay

Corporate governance is about ethical conduct in business. Ethics is concerned with the code of valu...

Critics of the excessive packages are of the opinion that such high packages reflect ‘pay for failure’ and do not take in to account the financial performance of the company (Solomon, 2007 p. 40). Additionally, most of the directors are geared at self-interests, thus undermining the ability of the shareholders to receive a fair return for their investments (Barty and Jones, 2012 p.14).
According to a recent report by the High Pay Commission, there has been a drastic growth in directors’ packages over the last thirty years. According to the report, directors’ packages have risen by about 5,000 percent in the last thirty years while the average income worker has increased by only 300 percent. The report...
6 Pages(1500 words)Coursework
sponsored ads
Save Your Time for More Important Things
Let us write or edit the scholarship essay on your topic "CORPORATE FINANCE MINICASE 4" with a personal 20% discount.
GRAB THE BEST PAPER

Let us find you another Scholarship Essay on topic CORPORATE FINANCE MINICASE 4 for FREE!