Comments (0)
Add to wishlistDelete from wishlist
Cite this document
Summary
The character that resonates most with me is Deb Thomsen, the editor of the local newspaper. Deb was doing her job on remembering the death of Matthew Shepard, as she was part of the short series commemorating the death, but her heart was more on the desire to move one from that…
Download full paperFile format: .doc, available for editing
HIDE THIS PAPERGRAB THE BEST PAPER93.6% of users find it useful 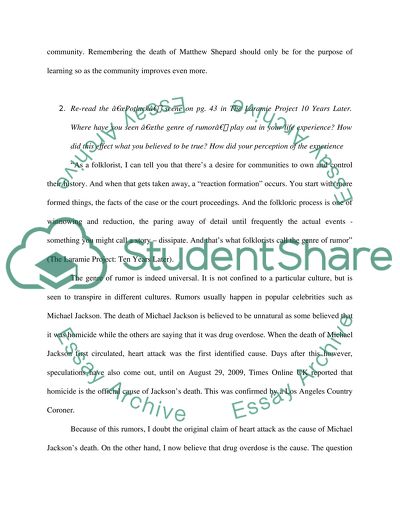 Extract of sample "The Laramie Project"

Download file to see previous pages Deb Thomsen is one of those who do not believe that it was sexuality that brought forth the killing but she mentioned one very enlightening remark about murder. She said, "I think everything is a hate crime. You have to have some kind of hatred in you to do that to another human being. As far as where that hatred comes from, I really couldn't tell youbut we're moving on from this" (The Laramie Project: Ten Years Later).
Indeed, the motivation of the killer is always hate because the opposite, love would not send someone killing and taking advantage of his neighbor. It was ten years already and many has been done to improve the community such as starting a campaign for social justice. This must be a very good development and the focus now should be on improving the safety of the community. Remembering the death of Matthew Shepard should only be for the purpose of learning so as the community improves even more.
2. Re-read the Potluck scene on pg. 43 in The Laramie Project 10 Years Later. Where have you seen the genre of rumor play out in your life experience How did this effect what you believed to be true How did your perception of the experience
"As a folklorist, I can tell you that there's a desire for communities to own and control their history. And when that gets taken away, a "reaction formation" occurs. You start with more formed things, the facts of the case or the court proceedings. And the folkloric process is one of winnowing and reduction, the paring away of detail until frequently the actual events - something you might call a story - dissipate. And that's what folklorists call the genre of rumor" (The Laramie Project: Ten Years Later).
The genre of rumor is indeed universal. It is not confined to a particular culture, but is seen to transpire in different cultures. Rumors usually happen in popular celebrities such as Michael Jackson. The death of Michael Jackson is believed to be unnatural as some believed that it was homicide while the others are saying that it was drug overdose. When the death of Michael Jackson first circulated, heart attack was the first identified cause. Days after this however, speculations have also come out, until on August 29, 2009, Times Online UK reported that homicide is the official cause of Jackson's death. This was confirmed by a Los Angeles Country Coroner.
Because of this rumors, I doubt the original claim of heart attack as the cause of Michael Jackson's death. On the other hand, I now believe that drug overdose is the cause. The question now is whether the drug overdose was deliberately planned or just a case of negligence by the doctor.
3. What are the arguments for supporting hate crime legislation What are the arguments against it
The legislation against hate crime is believed to be necessary as there are sectors and groups in the community who often suffers violation of human rights. Some believe that it is necessary to particularly categorize crime because "when a criminal act is based on a factors such as a victim's race, gender, sexual orientation or religion, it takes on some of the characteristics of a terrorist act. The victim and the perpetrator are typically strangers. The crime is not directed simply against one person; it is ...Download file to see next pagesRead More
Share:
Tags
Cite this document
(“The Laramie Project Book Report/Review Example | Topics and Well Written Essays - 750 words”, n.d.)
The Laramie Project Book Report/Review Example | Topics and Well Written Essays - 750 words. Retrieved from https://studentshare.org/miscellaneous/1506644-the-laramie-project

CHECK THESE SAMPLES OF The Laramie Project

Another important purpose of this case is to focus on the plans established by me for maximum utilization of the resources of the hospital in such a way which will help to achieve the goals of the organization.
I would determine the requirement of the staff of the food service department by evaluating the ratio of patients and staff. More patients require for delivering effective service. Ineffective service of the food department determines the requirement of the staff. For improving the quality of service I would require more new staff (McClay).
As a manager, I would maintain different levels like food production, service delivery, quality testing, etc in the food department of the hospital. From food production to con...
10 Pages(2500 words)Case Study
sponsored ads
Save Your Time for More Important Things
Let us write or edit the book report/review on your topic "The Laramie Project" with a personal 20% discount.
GRAB THE BEST PAPER

Let us find you another Book Report/Review on topic The Laramie Project for FREE!