Comments (0)
Add to wishlistDelete from wishlist
Cite this document
Summary
A strong financial sector in any economy is one basic asset that largely steer the economic growth of an economy. Many experts have re-confirmed this by setting and establishing the relationship. Financial sector will have to include a vibrant stock market which can attract foreign direct investment into the country can to a large extent steer an economy to greater heights…
Download full paperFile format: .doc, available for editing
HIDE THIS PAPERGRAB THE BEST PAPER95.9% of users find it useful 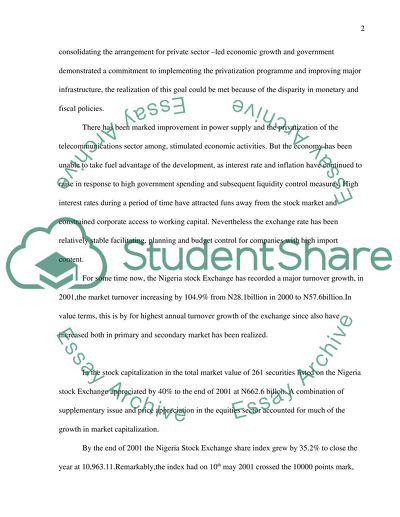 Extract of sample "Stock Market and Economy of Nigeria"

Download file to see previous pages Several effects of financial and stock market development on gross National product, Gross domestic development and Employment rate shall be used to establish the relationship.
Excluding South Africa, Nigeria has the largest economy in sub-Sahara Africa. In the last two decades ,there has been no progress made in alleviating poverty, expanding and enhancing economic development despite the massive effort made and the many programmes established for that purpose's growth pattern of the Nigerian economy has been quite sluggish over the last two decades. The level of poverty is further exuberated by the pandemic of inequality.
The economic performance has had a mixture as the macro-economy environment has witnessed positive and negative influences. Even though several programmes have been aimed at consolidating the arrangement for private sector -led economic growth and government demonstrated a commitment to implementing the privatization programme and improving major infrastructure, the realization of this goal could be met because of the disparity in monetary and fiscal policies.
There has been marked improvement in power supply and the privatization of the telecommunications sector among, stimulated economic activities. But the economy has been unable to take fuel advantage of the development, as interest rate and inflation have continued to raise in response to high government spending and subsequent liquidity control measures. High interest rates during a period of time have attracted funs away from the stock market and constrained corporate access to working capital. Nevertheless the exchange rate has been relatively stable facilitating, planning and budget control for companies with high import content.
For some time now, the Nigeria stock Exchange has recorded a major turnover growth, in 2001,the market turnover increasing by 104.9% from N28.1billion in 2000 to N57.6billion.In value terms, this is by for highest annual turnover growth of the exchange since also have increased both in primary and secondary market has been realized.
In the stock capitalization in the total market value of 261 securities listed on the Nigeria stock Exchange appreciated by 40% to the end of 2001 at N662.6 billon. A combination of supplementary issue and price appreciation in the equities sector accounted for much of the growth in market capitalization.
By the end of 2001 the Nigeria Stock Exchange share index grew by 35.2% to close the year at 10,963.11.Remarkably,the index had on 10th may 2001 crossed the 10000 points mark, And on 17th October 2001 reached all time high of 11,339.67 before dropping to its year end position.
In lieu of the ever increasing favorable condition bestowed on the Nigeria economy, since the inception of democracy in May 1999, foreign investors continued to invest in Nigeria through the Nigerian stock exchange. The returns of the foreign portfolio transaction are soaring higher.
The Nigerian stock exchange has remained focused on improving market infrastructure, expanding market investor base, and consolidating the global ...Download file to see next pagesRead More
Share:
Tags
Cite this document
(“Stock Market and Economy of Nigeria Research Paper”, n.d.)
Retrieved from https://studentshare.org/miscellaneous/1505310-stock-market-and-economy-of-nigeria

“Stock Market and Economy of Nigeria Research Paper”, n.d. https://studentshare.org/miscellaneous/1505310-stock-market-and-economy-of-nigeria.
Comments (0)
Click to create a comment or rate a document

CHECK THESE SAMPLES OF Stock Market and Economy of Nigeria

However, political instability and turmoil are yet a few of the hindrances which could affect the stock markets and in a worst-case scenario may as well, completely shut down businesses (Root 1982). The new business practices, on the other hand, involve a transparent setup and a free market, free of turmoil to operate and maximize production (Bennett 1998). Also, in such a case, the consumer must also be able to spend on the product, to make it a success. However, Burma currently has strong institutions having a hold on the resources which need to be exploited, i.e. a few of the military generals and autocrats have access to the resources, and thus, dealing with these groups might prove to be a waste of the corporation`s own effor...
6 Pages(1500 words)Assignment
sponsored ads
Save Your Time for More Important Things
Let us write or edit the research paper on your topic "Stock Market and Economy of Nigeria" with a personal 20% discount.
GRAB THE BEST PAPER

Let us find you another Research Paper on topic Stock Market and Economy of Nigeria for FREE!