Comments (0)
Add to wishlistDelete from wishlist
Cite this document
Summary
This study sought to examine and evaluate the Culture(s) and sub cultures that exist within Widney Cabs Limited. The study relied on the models developed by Schein Denison and their contemporaries to illustrate how these models are represented in the reality of Widney Cabs Ltd.
…
Download full paperFile format: .doc, available for editing
HIDE THIS PAPERGRAB THE BEST PAPER95.5% of users find it useful 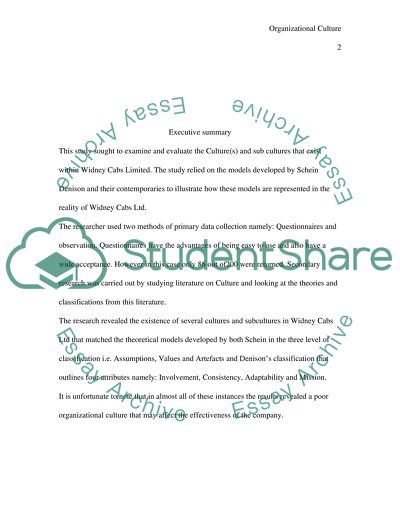 Extract of sample "The organizational culture for results"

Download file to see previous pages The research revealed the existence of several cultures and subcultures in Widney Cabs Ltd that matched the theoretical models developed by both Schein in the three level of classification i.e. Assumptions, Values and Artefacts and Denison's classification that outlines four attributes namely: Involvement, Consistency, Adaptability and Mission.
This study will evaluate and assess the different aspects of organizational culture that exist in Widney Cabs Ltd. The study examines these culture(s) and sub cultures in light of the relationship with models or classification from academic literature, existing knowledge and theories on organizational culture. Jacques (1951) defines organizational culture as the customary or traditional ways of thinking and doing things common to most members of an organization.
There exists a significant level of formal knowledge on the subject of culture(s) and sub-cultures that exist in organizations and their effects on the organizational behaviour. Founders and leaders of organizations create these cultures, which are then developed and sustained by people. Organization's executives generate and impart the organization's ideals. They also promote the core values that convey inclination to certain behaviors or effects. Norms on the other hand express acceptable ways of achieving set goals. Studies have shown that the development of organizational culture requires interaction within the membership. (Louis, Posner, and Powell 1983). According to Schein (1985), there are three levels of culture,the basic being Assumptions that form the foundation of culture.
Assumptions Espoused values Artefacts
(Beliefs, thoughts) (Goals, strategies e.t.c) (Visible manifestations)
Fig 1.
These assumptions are unconscious beliefs, thoughts, perceptions, and feelings. Next to these are the espoused values that consist of goals, philosophies. Lastly are the artefacts, which are physical manifestations, which may not be obvious to a lay observer of organizational behaviour and process. Schein's model has had a wide acceptance and has in many ways allowed insight on culture. However the model raises some questions: Who is unconscious about these assumptions It is presumed that the researcher will be aware but not the organizational members. What happen to the presumption when the organizational members learn about the Assumptions It is important that leaders learn about the underlying links that hold artefacts; values and assumptions together so that they can better understand the usefulness of this model in creating positive organizational change. Research by John VanMaanan and Steven Barley (1984) shed some light on the nature of interactions. They found out that interaction was "cognitive and behavioural". New personnel learn from the established workplace community the conventional occupational behaviours and practices that are acceptable across the board. In organizations ...Download file to see next pagesRead More
Share:
Tags
Cite this document
(“The organizational culture for results Research Paper”, n.d.)
Retrieved from https://studentshare.org/miscellaneous/1505261-the-organizational-culture-for-results

“The Organizational Culture for Results Research Paper”, n.d. https://studentshare.org/miscellaneous/1505261-the-organizational-culture-for-results.
Comments (0)
Click to create a comment or rate a document

CHECK THESE SAMPLES OF The organizational culture for results

... of organizations culture towards problem solving: Employee involvement is crucial in the organizational change. The organizational change should be covering the entire organization starting from the top to down. There should be a change in the attitudes and behaviors of the company. In order to introduce change, the company should determine the strategy of producing the best results. Client and Practitioner Considerations: The organization should choose the organization development practitioner i.e. whether internal or external consultant. Consulting with both change agents has its own advantages and disadvantages. The internal practitioner may be some top level professionals like Vice President, Human Resource and a supporting team...
7 Pages(1750 words)Case Study

Let us find you another Research Paper on topic The organizational culture for results for FREE!