Comments (0)
Add to wishlistDelete from wishlist
Cite this document
Summary
Internet has today become the easiest and most convenient form of communication between individuals, corporates and even governments. With growth in volumes of data, come security problems. Programming and coding have become very common and easy to access, leading to an increase in internet crime…
Download full paperFile format: .doc, available for editing
HIDE THIS PAPERGRAB THE BEST PAPER92.6% of users find it useful 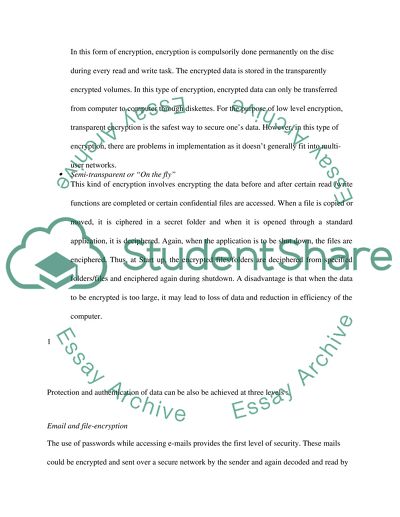 Download file to see previous pages The recipient's identity is usually established online through digital signatures or certificates.
Under this encryption, the user has to manually select the files and folders to be encrypted and run special command/ menu item to encrypt and decrypt the selected objects through certain software. Thus, the user must always remember to encrypt the relevant data before logging off. This gives scope for human errors, where the user might forget to encrypt the data before leaving the system. However, manual encryption is technically more reliable and simple than other forms of encryption.[Cryprite.com]
In this form of encryption, encryption is compulsorily done permanently on the disc during every read and write task. The encrypted data is stored in the transparently encrypted volumes. In this type of encryption, encrypted data can only be transferred from computer to computer through diskettes. For the purpose of low level encryption, transparent encryption is the safest way to secure one's data. However, in this type of encryption, there are problems in implementation as it doesn't generally fit into multi-user networks.
This kind of encryption involves encrypting the data before and after certain read /write functions are completed or certain confidential files are accessed. When a file is copied or moved, it is ciphered in a secret folder and when it is opened through a standard application, it is deciphered. Again, when the application is to be shut down, the files are enciphered. Thus, at Start up, the encrypted files/folders are deciphered from specified folders/files and enciphered again during shutdown. A disadvantage is that when the data to be encrypted is too large, it may lead to loss of data and reduction in efficiency of the computer.
1
Protection and authentication of data can be also be achieved at three levels :

Email and file-encryption
The use of passwords while accessing e-mails provides the first level of security. These mails could be encrypted and sent over a secure network by the sender and again decoded and read by the receiver. However, with the use of internet expanding to unlimited proportions, files can be intercepted and sensitive information can be accessed by hackers. It is also possible to hack or send phishing mails through e-mails.
Data encryption during transmission using VPNs
Transmission encryption technologies include DES (Data Encryption Standard) or AES (Advanced Encryption Standard) .This is a relatively safer way of transmitting information over the internet. A virtual private network cannot be easily accessed by intruders or hackers and information is encrypted using standard procedures like DES or AES.
Password encryption on public interfaces
An example of asymmetrical key provision; this type of encryption involves the use of a plug point that has to manage keys, decide the algorithm to use for encryption and protect the master key or secret.
Classification based on keys :
Cryptography is the process of disguising data as cipher text before sending it over a network.
This disguised data is encrypted by applying an algorithm to a ...Download file to see next pagesRead More
Share:
Tags
Cite this document
(“Data Encryption and Authentication Methods Term Paper”, n.d.)
Data Encryption and Authentication Methods Term Paper. Retrieved from https://studentshare.org/miscellaneous/1504824-data-encryption-and-authentication-methods

CHECK THESE SAMPLES OF Data Encryption and Authentication Methods

... decisions to gain advantage from depreciation irregularities. Straight line depreciation is a simple and practical method whose purpose has never been to manipulate data. Depreciation also does not affect the cash flow of the firm. There are business projects such as strategic investments which cannot be properly evaluated using outdated financial metrics. A strategic investment is a project that produces insufficient earnings to cover the cost of capital in the early years, but will produce higher income in future fiscal years. The use of EVA is much better at accessing the value of these types of projects. A movement to switch from net income to economic income could have negative consequences. Investors currently believe a lot...
8 Pages(2000 words)Article
sponsored ads
Save Your Time for More Important Things
Let us write or edit the term paper on your topic "Data Encryption and Authentication Methods" with a personal 20% discount.
GRAB THE BEST PAPER

Let us find you another Term Paper on topic Data Encryption and Authentication Methods for FREE!