Comments (0)
Add to wishlistDelete from wishlist
Cite this document
Summary
Emile Durkheim revolutionized the study of human relationships by establishing sociology as a separate branch of science, distinct from psychology and philosophy. For this reason, he is called the father of sociology (www.emile-durkheim.com). Some of his works like The Division of Labor (1893), The Rules of Sociological Method (1895), Le Suicide (1897) are considered to be very important to in-depth understanding of modern sociology…
Download full paperFile format: .doc, available for editing
HIDE THIS PAPERGRAB THE BEST PAPER93.1% of users find it useful 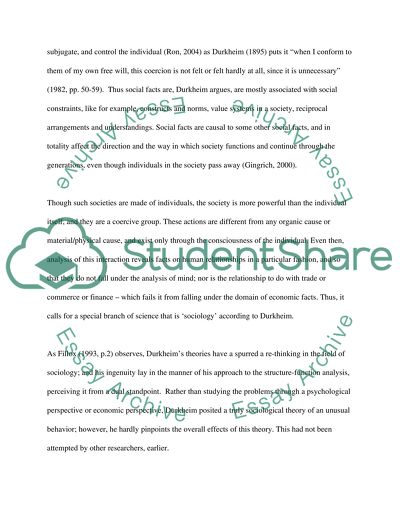 Download file to see previous pages Central to Durkheim's analysis of social sciences is the way in which societies evolve. To him, society was to be identified as something independent, and as one consisting of social forces with social dimensions (Filloux 1993, p.2). They are particularly different social traits and factors, which are beyond the fields of psychology, or biology. These traits or forces are nothing but 'Social Facts'. According to Durkheim, a society is understood by social facts - those things that are not solely linked to the individual but, are rather external to him or her; they are a set of facts that are associated with the manner of acting, thoughts, and feelings that have the potential to subjugate, and control the individual (Ron, 2004) as Durkheim (1895) puts it "when I conform to them of my own free will, this coercion is not felt or felt hardly at all, since it is unnecessary" (1982, pp. 50-59). Thus social facts are, Durkheim argues, are mostly associated with social constraints, like for example, constructs and norms, value systems in a society, reciprocal arrangements and understandings. Social facts are causal to some other social facts, and in totality affect the direction and the way in which society functions and continue through the generations, even though individuals in the society pass away (Gingrich, 2000).
Though such societies are made of individuals, the society is more powerful than the individual itself, and they are a coercive group. These actions are different from any organic cause or material/physical cause, and exist only through the consciousness of the individual. Even then, analysis of this interaction reveals facts on human relationships in a particular fashion, and so that they do not fall under the analysis of mind; nor is the relationship to do with trade or commerce or finance - which fails it from falling under the domain of economic facts. Thus, it calls for a special branch of science that is 'sociology' according to Durkheim.
As Fillox (1993, p.2) observes, Durkheim's theories have a spurred a re-thinking in the field of sociology; and his ingenuity lay in the manner of his approach to the structure-function analysis, perceiving it from a dual standpoint. Rather than studying the problems through a psychological perspective or economic perspective, Durkheim posited a truly sociological theory of an unusual behavior; however, he hardly pinpoints the overall effects of this theory. This had not been attempted by other researchers, earlier.
Durkheim and Divisions of Labor
Even though social facts were important details, according to Durkheim, they are not the causal reasons for the formation of the society. The basis on which such social organization is constructed, are determinants such as moral values, rules, social solidarity, religion, and a congenial agreement in co-existence ...Download file to see next pagesRead More
Share:
Tags
Cite this document
(“Sociology essay Book Report/Review Example | Topics and Well Written Essays - 1250 words”, n.d.)
Retrieved from https://studentshare.org/miscellaneous/1504233-sociology-essay-book-reportreview

Can Abortion be a Morally Acceptable Choice

What Does It Mean to Be Awake

Compare a success project with a fail project

... mission and vision of the company. Beyond this, it also needs to review how its strategy formulation and strategy implementation had gotten separated in the last few years (Grant 2005, p. 187). Even with todays remaining six divisions (infrastructure, industrials, commercial finance, GE Money, health care and NBC-Universal), it still needs to trim down. In other words, G.E. needs to reformulate its strategy and decide once and for all that it is no longer viable to be a conglomerate. The days of empire are over and it is best to start selecting the core areas in which it can compete effectively by disposing of non-core assets and businesses. It is only now that G.E. has finally tried to go past the shadow of Jack Welch whose influence...
12 Pages(3000 words)Report

8 Pages(2000 words)Research Paper
sponsored ads
Save Your Time for More Important Things
Let us write or edit the book report/review on your topic "Sociology essay Book Report/Review" with a personal 20% discount.
GRAB THE BEST PAPER