Comments (0)
Add to wishlistDelete from wishlist
Cite this document
Summary
In the article "Can science explain everything Anything" Steven Weinberg discusses the subjective nature of modern science and its limitations for a modern man. The author states that modern science cannot explain events and processes but it just describes these processes giving some explanations on nature and outcomes of physical events…
Download full paperFile format: .doc, available for editing
HIDE THIS PAPERGRAB THE BEST PAPER97.6% of users find it useful 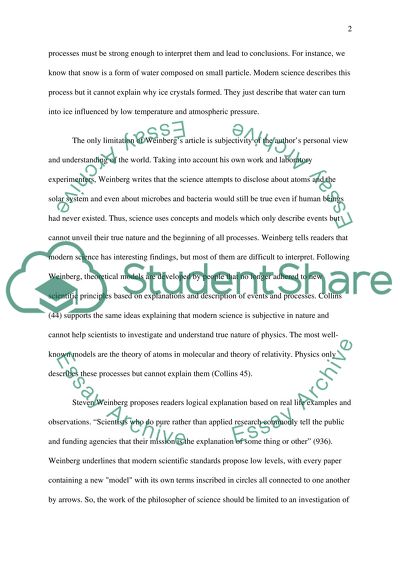 Extract of sample "Relativity of Science"

Download file to see previous pages Thesis Modern science operates with a limited number of concepts and models which do not allow a scientist to explain the nature of processes but to describe them.
Steven Weinberg is the Nobel Prize-winning physicist, who spends much of his life working in a laboratory and testing weak force theories and electromagnetic interaction in particles. Steven Weinberg provides readers with credible and accurate information on the topic based on his own observations and conclusions. According to Weinberg, the evidence for any claim must be clear to every person who would question the event or a process. Science always operates in the present, so every explanation must be supported by evidence currently available to a scientist. Weinberg explains that theoretical explanations of events or processes must be strong enough to interpret them and lead to conclusions. For instance, we know that snow is a form of water composed on small particle. Modern science describes this process but it cannot explain why ice crystals formed. They just describe that water can turn into ice influenced by low temperature and atmospheric pressure.
The only limitation of Weinberg's article is subjectivity of the author's personal view and understanding of the world. Taking into account his own work and laboratory experimenters, Weinberg writes that the science attempts to disclose about atoms and the solar system and even about microbes and bacteria would still be true even if human beings had never existed. Thus, science uses concepts and models which only describe events but cannot unveil their true nature and the beginning of all processes. Weinberg tells readers that modern science has interesting findings, but most of them are difficult to interpret. Following Weinberg, theoretical models are developed by people that no longer adhered to new scientific principles based on explanations and description of events and processes. Collins (44) supports the same ideas explaining that modern science is subjective in nature and cannot help scientists to investigate and understand true nature of physics. The most well-known models are the theory of atoms in molecular and theory of relativity. Physics only describes these processes but cannot explain them (Collins 45).
Steven Weinberg proposes readers logical explanation based on real life examples and observations. "Scientists who do pure rather than applied research commonly tell the public and funding agencies that their mission is the explanation of some thing or other" (936). Weinberg underlines that modern scientific standards propose low levels, with every paper containing a new "model" with its own terms inscribed in circles all connected to one another by arrows. So, the work of the philosopher of science should be limited to an investigation of the standards and procedures that have informed scientific value. The main problem of modern science is that it displays the standards and procedures that have been utilized during various theoretical model. The main limitation of descriptive nature of sconce is that scientific knowledge tries to educate scientists about proper evaluative practice. No such recommendation is countenanced on the theoretical nature of any knowledge. Instead, the scientists should remain neutral.
Contemporary scientists are left free to apply, modify, or ...Download file to see next pagesRead More
Share:
Tags
Cite this document
(“Relativity of Science Book Report/Review Example | Topics and Well Written Essays - 1000 words”, n.d.)
Relativity of Science Book Report/Review Example | Topics and Well Written Essays - 1000 words. Retrieved from https://studentshare.org/miscellaneous/1499429-relativity-of-science

CHECK THESE SAMPLES OF Relativity of Science

Medical knowledge consists of three issues. Knowledge gained at the medical college, knowledge gained in the practical field in real-life situations in dealing with the patients and above all the self-confidence of the doctor to put into practice his latent skill. A confident doctor does not hesitate to tell the truth. Atul Gawande (2003) writes “There are surgeons who will see faults everywhere except in themselves. They have no questions and no fears about their abilities. As a result, they learn nothing from their mistakes and know nothing of their limitations.” (p.61)Such a doctor lacks loyalty to the professional ethical principles. A lie told has to be remembered all the times, but truth has no such problems. Gaw...
7 Pages(1750 words)Book Report/Review

Impact of Science and Technology in Society

...﻿IMPACT OF SCIENCE AND TECHNOLOGY IN SOCIETY; Recently-developed social networking websites (such as Facebook) are corrosive to real community Introduction The advancement of science and technology has been one of the greatest creativity of mankind. Introduction of social networking websites like Facebook has impacted much positively on human lives, with almost equal share of adverse effects on the very tenets of the existing community. The introduction and use of social media have indeed revolutionized various aspects of human communication and socialization on a global scale (Castells, 2010). Notably, this fast revolution in media technology internationally presents two faceted aspects, namely advantages with regards to rapid human...
7 Pages(1750 words)Assignment
sponsored ads
Save Your Time for More Important Things
Let us write or edit the book report/review on your topic "Relativity of Science" with a personal 20% discount.
GRAB THE BEST PAPER

Let us find you another Book Report/Review on topic Relativity of Science for FREE!