Comments (0)
Add to wishlistDelete from wishlist
Summary
From the paper "Legal & Ethical Issues Underlying in the Operations of MNC’s" it is clear that foreign markets are the dream of any business. In the past two decades, quite a few MNC’s have behaved in ways in which the ethics and the corporate social responsibility of all MNCs are being questioned…
Download full paperFile format: .doc, available for editing
HIDE THIS PAPERGRAB THE BEST PAPER97.8% of users find it useful 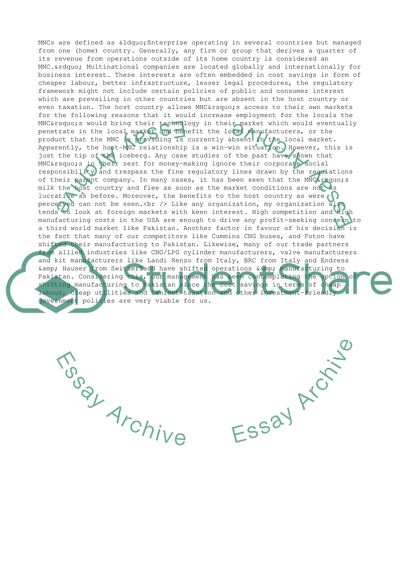 Download file to see previous pages MNCs are defined as “Enterprise operating in several countries but managed from one (home) country. Generally, any firm or group that derives a quarter of its revenue from operations outside of its home country is considered an MNC.” Multinational companies are located globally and internationally for business interest. These interests are often embedded in cost savings in form of cheaper labour, better infrastructure, lesser legal procedures, the regulatory framework might not include certain policies of public and consumer interest which are prevailing in other countries but are absent in the host country or even taxation. The host country allows MNC’s access to their own markets for the following reasons that it would increase employment for the locals the MNC’s would bring their technology in their market which would eventually penetrate in the local market and benefit the local manufacturers, or the product that the MNC is providing is currently absent in the local market. Apparently, the host-MNC relationship is a win-win situation. However, this is just the tip of the iceberg. Any case studies of the past have shown that MNC’s in their zest for money-making ignore their corporate social responsibility and trespass the fine regulatory lines drawn by the regulations of their parent company. In many cases, it has been seen that the MNC’s milk the host country and flee as soon as the market conditions are not as lucrative as before. Moreover, the benefits to the host country as were perceived can not be seen.
Like any organization, my organization also tends to look at foreign markets with keen interest. High competition and high manufacturing costs in the USA are enough to drive any profit-seeking concern to a third world market like Pakistan. Another factor in favour of his decision is the fact that many of our competitors like Cummins CNG buses, and Foton have shifted their manufacturing to Pakistan. Likewise, many of our trade partners from allied industries like CNG/LPG cylinder manufacturers, valve manufacturers and kit manufacturers like Landi Renzo from Italy, BRC from Italy and Endress & Hauser from Switzerland have shifted operations & manufacturing to Pakistan. Considering this, our management has been contemplating the option of shifting manufacturing to Pakistan since the cost savings in terms of cheap labour, cheap utilities and lenient taxation and other investment-friendly government policies are very viable for us. ...Download file to see next pagesRead More
Share:
Comments (0)
Click to create a comment or rate a document
sponsored ads
Save Your Time for More Important Things
Let us write or edit the research paper on your topic "Legal & Ethical Issues Underlying in the Operations of MNCs" with a personal 20% discount.
GRAB THE BEST PAPER

Let us find you another Research Paper on topic Legal & Ethical Issues Underlying in the Operations of MNCs for FREE!