Comments (0)
Add to wishlistDelete from wishlist
Cite this document
Summary
Economic forces play a vital role in setting up a business. For instance in a region where there is economic turmoil customers would not possess high disposable income to visit a…
Download full paperFile format: .doc, available for editing
HIDE THIS PAPERGRAB THE BEST PAPER91.1% of users find it useful 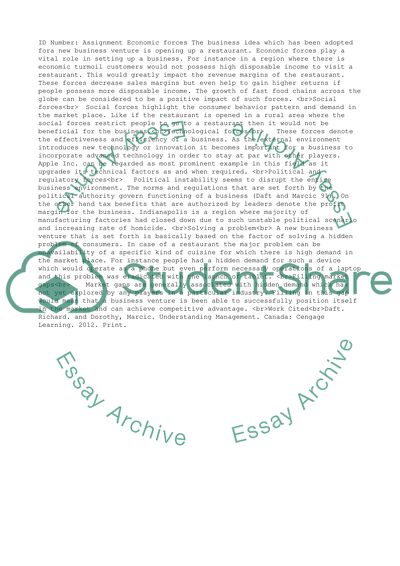 ID Number: Assignment Economic forces The business idea which has been adopted fora new business venture is opening up a restaurant. Economic forces play a vital role in setting up a business. For instance in a region where there is economic turmoil customers would not possess high disposable income to visit a restaurant. This would greatly impact the revenue margins of the restaurant. These forces decrease sales margins but even help to gain higher returns if people possess more disposable income. The growth of fast food chains across the globe can be considered to be a positive impact of such forces.
Social forces
Social forces highlight the consumer behavior pattern and demand in the market place. Like if the restaurant is opened in a rural area where the social forces restrict people to go to a restaurant then it would not be beneficial for the business.
Technological forces
These forces denote the effectiveness and efficiency of a business. As the external environment introduces new technology or innovation it becomes important for a business to incorporate advanced technology in order to stay at par with other players. Apple Inc. can be regarded as most prominent example in this field as it upgrades its technical factors as and when required.
Political and regulatory forces
Political instability seems to disrupt the entire business environment. The norms and regulations that are set forth by the political authority govern functioning of a business (Daft and Marcic 91). On the other hand tax benefits that are authorized by leaders denote the profit margin for the business. Indianapolis is a region where majority of manufacturing factories had closed down due to such unstable political scenario and increasing rate of homicide.
Solving a problem
A new business venture that is set forth is basically based on the factor of solving a hidden problem of consumers. In case of a restaurant the major problem can be unavailability of a specific kind of cuisine for which there is high demand in the market place. For instance people had a hidden demand for such a device which would operate as a phone but even perform necessary operations of a laptop and this problem was eradicated with the launch of tablet.
Filling market gaps
Market gaps are generally associated with hidden demand which has not yet explored by any players in a particular industry. Filling in this gap would mean that a business venture is been able to successfully position itself in the market and can achieve competitive advantage.
Work Cited
Daft. Richard. and Dorothy, Marcic. Understanding Management. Canada: Cengage Learning. 2012. Print. Read More
Share:
Tags
Cite this document
(“Assignment Example | Topics and Well Written Essays - 250 words - 262”, n.d.)
Assignment Example | Topics and Well Written Essays - 250 words - 262. Retrieved from https://studentshare.org/management/1656179-assignment