Comments (0)
Add to wishlistDelete from wishlist
Cite this document
Summary
It is a Japanese multinational auto maker with its headquarters in Aichi, Japan. Despite being among the top in the automobile industry Toyota faced…
Download full paperFile format: .doc, available for editing
HIDE THIS PAPERGRAB THE BEST PAPER96% of users find it useful 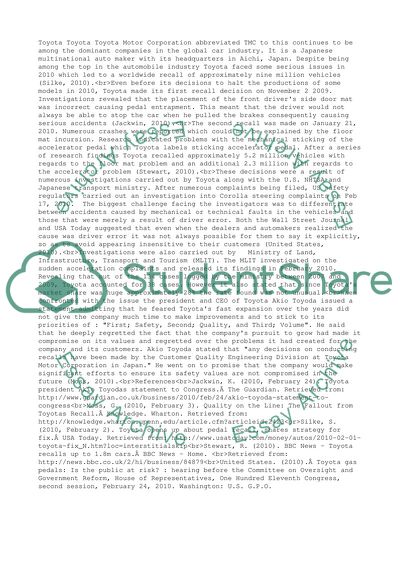 Toyota Toyota Toyota Motor Corporation abbreviated TMC to this continues to be among the dominant companies in the global car industry. It is a Japanese multinational auto maker with its headquarters in Aichi, Japan. Despite being among the top in the automobile industry Toyota faced some serious issues in 2010 which led to a worldwide recall of approximately nine million vehicles (Silke, 2010).
Even before its decisions to halt the productions of some models in 2010, Toyota made its first recall decision on November 2 2009. Investigations revealed that the placement of the front driver’s side door mat was incorrect causing pedal entrapment. This meant that the driver would not always be able to stop the car when he pulled the brakes consequently causing serious accidents (Jackwin, 2010).
The second recall was made on January 21, 2010. Numerous crashes were reported which could not be explained by the floor mat incursion. Research indicated problems with the mechanical sticking of the accelerator pedal which Toyota labels sticking accelerator pedal. After a series of research findings Toyota recalled approximately 5.2 million vehicles with regards to the floor mat problem and an additional 2.3 million with regards to the accelerator problem (Stewart, 2010).
These decisions were a result of numerous investigations carried out by Toyota along with the U.S. NHTSA and Japanese transport ministry. After numerous complaints being filed, US safety regulators carried out an investigation into Corolla steering complaints on Feb 17, 2010. The biggest challenge facing the investigators was to differentiate between accidents caused by mechanical or technical faults in the vehicles and those that were merely a result of driver error. Both the Wall Street Journal and USA Today suggested that even when the dealers and automakers realized the cause was driver error it was not always possible for them to say it explicitly, so as to avoid appearing insensitive to their customers (United States, 2010).
Investigations were also carried out by Ministry of Land, Infrastructure, Transport and Tourism (MLIT). The MLIT investigated on the sudden acceleration complaints and released its findings in February 2010. Revealing that out of the 134 cases logged by the ministry between 2007 and 2009, Toyota accounted for 38 cases. However it also stated that since Toyota’s market share was huge approximately 28% the rate found was not unusual.
When confronted with the issue the president and CEO of Toyota Akio Toyoda issued a statement admitting that he feared Toyota’s fast expansion over the years did not give the company much time to make improvements and to stick to its priorities of : “First; Safety, Second; Quality, and Third; Volume”. He said that he deeply regretted the fact that the company’s pursuit to grow had made it compromise on its values and regretted over the problems it had created for the company and its customers. Akio Toyoda stated that “any decisions on conducting recalls have been made by the Customer Quality Engineering Division at Toyota Motor Corporation in Japan.” He went on to promise that the company would make significant efforts to ensure its safety values are not compromised in the future (Moss, 2010).
References
Jackwin, K. (2010, February 24). Toyota president Akio Toyodas statement to Congress. The Guardian. Retrieved from: http://www.guardian.co.uk/business/2010/feb/24/akio-toyoda-statement-to-congress
Moss, G. (2010, February 3). Quality on the Line: The Fallout from Toyotas Recall. Knowledge. Wharton. Retrieved from: http://knowledge.wharton.upenn.edu/article.cfm?articleid=2423
Silke, S. (2010, February 2). Toyota opens up about pedal recall, shares strategy for fix. USA Today. Retrieved from: http://www.usatoday.com/money/autos/2010-02-01-toyota-fix_N.htm?loc=interstitialskip
Stewart, R. (2010). BBC News - Toyota recalls up to 1.8m cars. BBC News - Home.
Retrieved from: http://news.bbc.co.uk/2/hi/business/84879
United States. (2010). Toyota gas pedals: Is the public at risk? : hearing before the Committee on Oversight and Government Reform, House of Representatives, One Hundred Eleventh Congress, second session, February 24, 2010. Washington: U.S. G.P.O. Read More
Share:
Tags
Cite this document
(“Toyota 2010 Term Paper Example | Topics and Well Written Essays - 500 words”, n.d.)
Toyota 2010 Term Paper Example | Topics and Well Written Essays - 500 words. Retrieved from https://studentshare.org/management/1603336-toyota-2010

CHECK THESE SAMPLES OF Toyota 2010

...to be one of the leading car manufacturers with a present global market share of around 11% and with total annual production of around 85,57,351 units along with total annual sales of around 84,18,000 units (Toyota, 2010). The net income of the company in 2011 was recorded to be 408,183 million Yen which was a significant increase by 94.9% from the last year, i.e. 2010. The sales of the company in different regions are as follows. Source: (Toyota, 2011) The market of UK has been stated to be considered as the chief market for the company on the basis of sales as well as manufacturing (Toyota Motor Manufacturing (UK) Ltd., 2012). The company has been...
11 Pages(2750 words)Essay

...?Mary Tran 26 April, Toyota gains competitive edge over other rivals in its product market due to its traditional and consistent business philosophy of focusing on ‘Toyota Production System’. As per this, Toyota not only involves its internal employees by recognizing and rewarding the loyalty and creativity, but also strengthens its ‘supplier-manufacturer’ relationship. Toyota maintains adherence among the internal as well as its external people, assuring its overall success. To point out, the working of Toyota revolves around two terms ‘quality of the products’ and ‘affordability’. These terms have been maintained by Toyota, converting...
1 Pages(250 words)Essay

...? (Assignment) Toyota: Current Long-term Objectives The Toyota Motor Corporation (TMC) or simply Toyota is a multinational automaker headquartered at Toyota in Japan. The company was founded by Kiichiro Toyoda on 28th August 1937. By the end of 2010, the Toyota employed 317,734 people globally. The Toyota is the world’s largest automobile manufacturer in terms of sales and production. This paper will discuss the current long term objectives of Toyota Motor Corporation. From the very beginning of its origin, the company’s management philosophy has reflected the concepts of Lean Manufacturing and Just In...
2 Pages(500 words)Essay

...responsibility. For example, everything from the basic stance of Toyota Company to its specific initiatives is put in place to make the environment better. In-depth annual environmental activities coverage is part of Toyota’s social and environmental initiatives. Toyota Company has been in support of SOS children villages’ mission to provide safe homes to thousands of children orphaned in the country. Toyota has also been a pivotal partner in the progressive development of the SOS children village from 2010 as a major part of the company’s corporate social responsibility program. Toyota Company has also made contributions to Mater Heart...
3 Pages(750 words)Essay

...coverage include luxury cars like Lexus RX330 and the Full-sized trucks, including the Tundra Double Cabin. In its strategic entry model, the company developed a number of models in the passenger vehicle market. The brands introduced into the market for this class include the Camry and Corolla, making the brands the number one in the market during 2002. At the lower class level of cars, Toyota introduced entry-level vehicles for the new entrants in the vehicle market. The brands in the lowest class in this market included the Scion XA, and the XB. Regional Strategy: North American Market Source: Compiled from (Toyota 2010) Traning institutions At Toyota, human resource...
3 Pages(750 words)Case Study

...2010 of 15% market share, adding new products, building plants, deploying trainers from Japan, and focusing on how to feed growth. To add insult to injury, the Japanese yen strengthened by 15% from July to December of 2008, and so every car shipped from Japan to the US cost 15% more. Ultimately, this led to the first loss in over 50 years of over $5 bn (Toyota Motor Corporation, 1997) Social Factors Also, Toyota has to overcome a string of problems. They include: ensuring quality and managing a sprawling network of manufacturing and sales. In spite of them Toyota plans to set-up its plants in the US, where it has to deal with labor-related issues, which its rivals are...
3 Pages(750 words)Case Study

...million yen. As far as production is concerned, in 2008 total production in Japan only was 5,160,000 units whereas for the next year this figure was found to be 4255000. Needless to say that such significant decline in production is due to reduced demand throughout the world. [Source: Toyota Motor Corp.] This above figure shows the total loss that the company made in the financial year 2008-09. The figures of 2010 in the figure are actually the forecasted ones. In addition to the above mentioned problem, Toyota has faced another major problem. The inconvenience caused due to the recall of cars. In the latter half of 2009 the automobile giant declared that it would recall almost 3.8...
16 Pages(4000 words)Research Paper

...– which is a luxury vehicle division of the Toyota Motor Corporation; while the non-automotive products / services include: housing, financial services, communications, marine vehicles, biotechnology etc among others (Toyota, 2010). Mission: "To attract and attain customers with high-valued products and services and the most satisfying ownership experience in America." (Toyota, 2010). Vision: “To be the most successful and respected car company in America" (Toyota, 2010). Guiding Principles: The company aims to be a "good corporate citizen" by continuously striving to win the trust of its customers globally. The company...
11 Pages(2750 words)Research Paper

...closely with the company for being the Eco-Driving champion in the locality (CSR Europe, 2010, p. 24) Realizing the need to act promptly for the environmental energy crisis and the changes in the climate Toyota aims to produce the ‘zero emissions’ vehicles for the society. For a stronger approach of the concept the company has implemented strategies to incorporate this act within the product development phase of vehicles. The core focus for the development includes elimination of the use of fuel, reduction in the use of resources and using renewable sources of energy for the development of pollution free environment for the society. The company ensures low emissions throughout the product life cycle and...
7 Pages(1750 words)Essay
sponsored ads
Save Your Time for More Important Things
Let us write or edit the term paper on your topic "Toyota 2010" with a personal 20% discount.
GRAB THE BEST PAPER

Let us find you another Term Paper on topic Toyota 2010 for FREE!