Comments (0)
Add to wishlistDelete from wishlist
Cite this document
Summary
The paper “History of Pert Theory and CPM” overviews more than half a century of evolving project evaluation and review technique - from its usage in the Fleet Ballistic Missile Program, disaster management and naval projects to modern planning and control of high-tech corporate projects…
Download full paperFile format: .doc, available for editing
HIDE THIS PAPERGRAB THE BEST PAPER97% of users find it useful 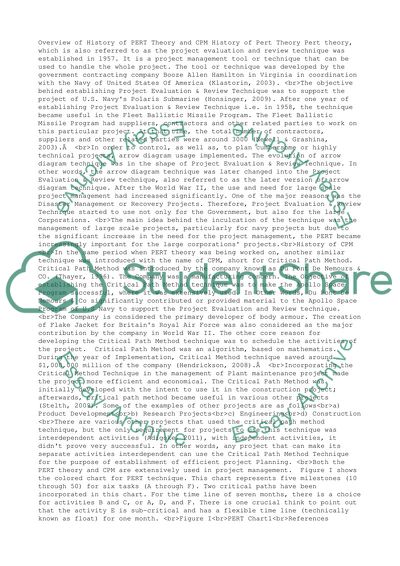 Extract of sample "History of Pert Theory and CPM"

Overview of History of PERT Theory and CPM History of Pert Theory Pert theory, which is also referred to as the project evaluation and review technique was established in 1957. It is a project management tool or technique that can be used to handle the whole project. The tool or technique was developed by the government contracting company Booze Allen Hamilton in Virginia in coordination with the Navy of United States Of America (Klastorin, 2003).
The objective behind establishing Project Evaluation & Review Technique was to support the project of U.S. Navy’s Polaris Submarine (Honsinger, 2009). After one year of establishing Project Evaluation & Review Technique i.e. in 1958, the technique became useful in the Fleet Ballistic Missile Program. The Fleet Ballistic Missile Program had suppliers, contractors and other related parties to work on this particular project. At that time, the total number of contractors, suppliers and other related parties were around 3000 (Newell & Grashina, 2003).
In order to control, as well as, to plan cumbersome or highly technical projects, arrow diagram usage implemented. The evolution of arrow diagram technique was in the shape of Project Evaluation & Review Technique. In other words, the arrow diagram technique was later changed into the Project Evaluation & Review technique, also referred to as the later version of arrow diagram technique. After the World War II, the use and need for large scale project management had increased significantly. One of the major reasons was the Disaster Management or Recovery Projects. Therefore, Project Evaluation & Review Technique started to use not only for the Government, but also for the large Corporations.
The main idea behind the inculcation of the technique was the management of large scale projects, particularly for navy projects but due to the significant increase in the need for the project management, the PERT became increasingly important for the large corporations’ projects.
History of CPM
In the same period when PERT theory was being worked on, another similar technique was introduced with the name of CPM, short for Critical Path Method. Critical Path Method was introduced by the company known as Du Pont De Nemours & CO. (Thayer, 1996). The Company was a manufacturing concern. The Objective of establishing the Critical Path Method technique was to make the Apollo Space Program successful, where it was extensively used. In Other Words, Du Pont De Nemours & Co significantly contributed or provided material to the Apollo Space Program of U.S Navy to support the Project Evaluation and Review technique.
The Company is considered the primary developer of body armour. The creation of Flake Jacket for Britain’s Royal Air Force was also considered as the major contribution by the company in World War II. The other core reason for developing the Critical Path Method technique was to schedule the activities of the project. Critical Path Method was an algorithm, based on mathematics. During the year of Implementation, Critical Method technique saved around $1,000,000 million of the company (Hendrickson, 2008).
Incorporating the Critical Method Technique in the management of Plant maintenance project made the project more efficient and economical. The Critical Path Method was initially developed with the intent to use it in the construction project; afterwards, critical path method became useful in various other projects (Stelth, 2009). Some of the examples of other projects are as follows
a) Product Development
b) Research Projects
c) Engineering
d) Construction
There are various other projects that used the critical path method technique, but the only requirement for projects to use this technique was interdependent activities (Adigoke, 2011), with independent activities, it didn’t prove very successful. In other words, any project that can make its separate activities interdependent can use the Critical Path Method Technique for the purpose of establishment of efficient project Planning.
Both the PERT theory and CPM are extensively used in project management. Figure I shows the colored chart for PERT technique. This chart represents five milestones (10 through 50) for six tasks (A through F). Two critical paths have been incorporated in this chart. For the time line of seven months, there is a choice for activities B and C, or A, D, and F. There is one crucial think to point out that the activity E is sub-critical and has a flexible time line (technically known as float) for one month.
Figure I
PERT Chart1
References
Honsinger, V. C. (2009). A managers view of pert/cpm. Naval Engineers Journal, 78(2), 241-244. Retrieved from http://onlinelibrary.wiley.com/doi/10.1111/j.1559-3584.1966.tb05619.x/abstract
Hendrickson, C., (2008).  Project Management for Construction (2.2 ed.). Prentice Hall.
Klastorin, T (2003). Project Management: Tools and Trade-Offs (3rd ed.). Wiley.
Newell, M. & Grashina, M (2003). The Project Management Question and Answer Book. American Management Association. p. 98.
Sule Adigoke, A. (2011). Measuring process effectiveness using CPM/PERT. International Journal of Business and Management, 6, Retrieved from http://ccsenet.org/journal/index.php/ijbm/article/view
Stelth, P. (2009). Project analysis through CPM. School Of Doctoral Studies (Europian Union) Journal, Retrieved from http://www.iiuedu.eu/press/journals/sds/sds1_july_2008/05_SECC_01.pdf
Thayer, H., (1996). Management of the Hanford Engineer Works in World War II, how the Corps, DuPont and the Metallurgical Laboratory fast tracked the original plutonium works. ASCE Press, pp. 66-67. Read More
Share:
Tags
Cite this document
(“This is a project management essay. Students are to research an Essay”, n.d.)
Retrieved from https://studentshare.org/management/1602540-this-is-a-project-management-essay-students-are-to-research-an-overview-of-the-history-of-the-software-or-tool-using-cpmpert-theory

(This Is a Project Management Essay. Students Are to Research an Essay)
https://studentshare.org/management/1602540-this-is-a-project-management-essay-students-are-to-research-an-overview-of-the-history-of-the-software-or-tool-using-cpmpert-theory.

“This Is a Project Management Essay. Students Are to Research an Essay”, n.d. https://studentshare.org/management/1602540-this-is-a-project-management-essay-students-are-to-research-an-overview-of-the-history-of-the-software-or-tool-using-cpmpert-theory.
Comments (0)
Click to create a comment or rate a document

CHECK THESE SAMPLES OF History of Pert Theory and CPM

...Wright's versions of the 1930's were organic as well as romantic (Checkland 2003). Philip Johnson's of the 1940's were restrained and classic intrinsically. Thus far both were abstractions of Japanese prototypes. A literal interval of Japanese architecture was launched in the mid 1950's following the erection of the Japanese Exhibition House in the garden of the Museum of Modern Art. Like the Japanese Dwelling at the Philadelphia fair it begot offspring on shore and hill; and after its hour of glory in New York the Exhibition House settled permanently in Fairmount Park. The style of shrines shows both modern and domestic architecture, the Western architecture was fully influenced from Japanese Architecture, The history...
9 Pages(2250 words)Essay

...?Tourism in Las Vegas and Dubai: A Comparative Study Introduction Tourism as a fast growing industry has become one of the stable and potential source of revenue to many countries across the world. The global tourism sector has identified two major trends emerging; people visiting domestic tourist attractions such as hill stations, seashores, and historical places, and people travelling overseas to visit and enjoy foreign destinations. Today, the global tourism industry represents a notable percent of the global GDP and creates a wide range of employment opportunities. Reports indicate that the tourism sector is significantly contributing to the economic growth of emerging countries like India and Brazil. Las Vegas and Dubai... in Las Vegas...
12 Pages(3000 words)Essay

...ASSIGNMENT PERT & CPM Prepared By: Please] Program Evaluation and Review Technique (PERT) and Critical Path Method (CPM) are the two well-known, narrowly associated techniques that are used broadly to keep an eye on the development of large projects; they both share almost the same characteristics and are often lumped together as one technique as both of them lead to same end result: a critical path, the longest time required for the completion of a project, and critical activities with slack time zero. According to (Hugg, 2005), "slack time, also called float time, is the amount of time a task can be delayed before the project finish date is delayed. Total slack can be...
5 Pages(1250 words)Essay

...Assignment 3 Value: 10% Due 24 June 2005 Word Length: Not applicable(exercise) Format: Essay (APA Referencing) Copy and Turnitin Copy Attempt both questions below: 1 Consider the PERT network: Activity Optimistic Estimate Most Likely Estimate Pessimistic Estimate 1-2 2 4 5 1-3 3 4 5 1-4 6 7 9 2-3 3 5 6 2-5 5 7 8 3-5 2 4 5 4-5 5 6 7 Designate the start of the project as time 0, and the scheduled time to complete the project (by contract) is 14 days. A Using the 3-time estimate shown above, calculate the expected value and the standard deviation for the expected value of the time required for each activity. B Using the time given by your expected value calculations determines the critical path for the project. C compute...
2 Pages(500 words)Math Problem

...was developed from several different fields of application such as construction, mechanical engineering, military projects, etc. Formal project management techniques were developed in USA in the 1960's as part of the early missile programmes. These techniques have since been used in almost every area of society, from government agencies to non-profit organisations, and from engineering companies to service industries (Wikipedia). A short history The early project management phase began in the 1950s in the United States where, from an ad-hoc-basis use of 'Gantt Charts' and informal techniques and tools, it graduated to the use of two mathematical 'project management models' known as: (1) the "Program Evaluation and Review...
19 Pages(4750 words)Essay

...Running Head: DATA MART PROJECT Data Mart Project: Gantt Chart and Network Diagram [Put here] [Put here] Gantt Charts and Network Diagrams have been very simple, but effective tools for project management. With the development of software applications such as Microsoft Project, these tools are now in even more widespread use. Data Mart Project: Gantt Chart The project plan in concern (Data Mart Project) uses a Gantt chart to organize the tasks. The task breakdown is done assuming a linear or waterfall development approach and it is a fairly complex breakdown. Work has been allocated on an hourly basis taking a total of 809 hours, which is approximately 100 working days. Since the 100 days are excluding the weekends, the elapsed... Head: DATA...
2 Pages(500 words)Essay

...Scheduling and Project Management (PERT and CPM SLP) Introduction In an organizational culture, the consideration that is usuallyaccorded to project management is that in which it is applied to ease the relational considerations among numerous departments of an organization. As an essential characteristic, project management has often allowed for the reflection of the organizational cultures and strategies that can be applied towards the facilitation of the completion of projects. For example, for an organization to significantly record increases in the volume of incoming projects and meet their intended goals, the use of project management in the respective departments would be very crucial to the...
4 Pages(1000 words)Assignment

Comparative Study of Critical Resource Diagramming Versus PERT and CPM

...(2013) states. For historians, philosophers, artistes and theoreticians who have established arguments concerning these historical movements, modernism and postmodernism are all engrossed in a discourse web with suppositions and ideologies that require a self-reflexive critique (Terry, Enwezor & Condee, 2008). Much of the argument presumes the possibility of a history critique, hypothesized as possessing a trajectory that was or was not in the modernist viewpoints, optimisms and ambitions of the 1930s to 1950s. And ever since about 2000, a newfangled debate on the postmodern has unwrapped. There is a mutual sense in various areas of cultural practice that many postmodernism issues are over assumed, and we are now in a...
8 Pages(2000 words)Essay
sponsored ads
Save Your Time for More Important Things
Let us write or edit the term paper on your topic "History of Pert Theory and CPM" with a personal 20% discount.
GRAB THE BEST PAPER

Let us find you another Term Paper on topic History of Pert Theory and CPM for FREE!