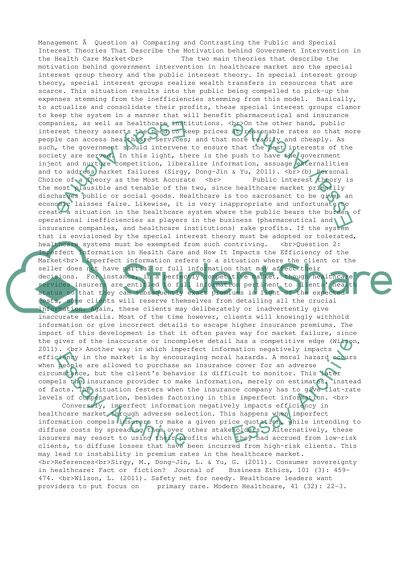 Management   Question a) Comparing and Contrasting the Public and Special Interest Theories That Describe the Motivation behind Government Intervention in the Health Care Market
The two main theories that describe the motivation behind government intervention in healthcare market are the special interest group theory and the public interest theory. In special interest group theory, special interest groups realize wealth transfers in resources that are scarce. This situation results into the public being compelled to pick-up the expenses stemming from the inefficiencies stemming from this model. Basically, to actualize and consolidate their profits, these special interest groups clamor to keep the system in a manner that will benefit pharmaceutical and insurance companies, as well as healthcare institutions.
On the other hand, public interest theory asserts the need to keep prices at reasonable rates so that more people can access healthcare services; and that more readily and cheaply. As such, the government should intervene to ensure that the best interests of the society are served. In this light, there is the push to have the government inject and nurture competition, liberalize information, assuage externalities and to address market failures (Sirgy, Dong-Jin & Yu, 2011).
(b) Personal Choice of a Theory as the Most Accurate
Public interest theory is the most plausible and tenable of the two, since healthcare market primarily discharges public or social goods. Healthcare is too sacrosanct to be given an economic laissez faire. Likewise, it is very inappropriate and unfortunate to create a situation in the healthcare system where the public bears the burden of operational inefficiencies as players in the business (pharmaceutical and insurance companies, and healthcare institutions) rake profits. If the system that is envisioned by the special interest theory must be adopted or tolerated, healthcare systems must be exempted from such contriving.
Question 2: Imperfect Information in Health Care and How It Impacts the Efficiency of the Market
Imperfect information refers to a situation where the client or the seller does not have partial or full information that may affect their decisions. For instance, in a perfectly competitive market, though healthcare services insurers are entitled to full information pertinent to clients’ health status so that they can subsequently exact premiums in light of the expected costs, some clients will reserve themselves from detailing all the crucial information. Again, these clients may deliberately or inadvertently give inaccurate details. Most of the time however, clients will knowingly withhold information or give incorrect details to escape higher insurance premiums. The import of this development is that it often paves way for market failure, since the giver of the inaccurate or incomplete detail has a competitive edge (Wilson, 2011).
Another way in which imperfect information negatively impacts efficiency in the market is by encouraging moral hazards. A moral hazard occurs when people are allowed to purchase an insurance cover for an adverse circumstance, but the client’s behavior is difficult to monitor. This later compels the insurance provider to make information, merely on estimates, instead of facts. The situation festers when the insurance company has to give flat-rate levels of compensation, besides factoring in this imperfect information.
Conversely, imperfect information negatively impacts efficiency in healthcare market through adverse selection. This happens when imperfect information compels insurers to make a given price quotation, while intending to diffuse costs by spreading them over other stakeholders. Alternatively, these insurers may resort to using their profits which they had accrued from low-risk clients, to diffuse losses that have been incurred from high-risk clients. This may lead to instability in premium rates in the healthcare market.
References
Sirgy, M., Dong-Jin, L. & Yu, G. (2011). Consumer sovereignty in healthcare: Fact or fiction? Journal of Business Ethics, 101 (3): 459-474.
Wilson, L. (2011). Safety net for needy. Healthcare leaders want providers to put focus on primary care. Modern Healthcare, 41 (32): 22-3. Read More
Share:
Tags
Cite this document
(“Answer the following 2 questions seperately Assignment”, n.d.)
Answer the following 2 questions seperately Assignment. Retrieved from https://studentshare.org/management/1598222-answer-the-following-2-questions-seperately

CHECK THESE SAMPLES OF Answer the following 2 questions seperately

...?Macroeconomics Using the collapse of the subprime mortgage market in the U.S., describe the components of good management and how regulation can contribute to prudent lending or encourage excessive risk taking. (What forms of discrimination are to be encouraged.) The collapse of subprime mortgage crisis has put the U.S. economy at worst however, various lessons have been learnt. One of the lessons learnt by the institutions and industry is related to good management. Most of the investments made in the U.S. mortgage industry were made without considering the possible results in future and were purely based on market speculations. It is important for management to understand the various factors like risk management, risk... Using the collapse ...
1 Pages(250 words)Assignment

...was drawn between such students, who made reports in the learning language and other students, who also had the same activities but with a teacher. The results of such a comparison were very interesting. The students from the first group showed the same level of almost all skills as students from the second teacher-directed group. The explanation of the study results are the following: 1. students used their knowledge in practice on a regular basis; 2. students’ motivation was high, because they decided individually what they were going to do. 5. The class under consideration is second language acquisition class. The audience is seven Arab students learning English, age 22-25, the level is intermediate....
10 Pages(2500 words)Assignment

..., diminish the claims on compensation as an entitlement. 2. Discuss the factors that influence internal pay structures. Based on your own experience, which ones do you think are the most important? Why? Criteria, which allows for different pay structures include skills, efforts, responsibility levels and working conditions. These factors form the broader categories of pay levels. In deciding upon internal pay structures several other key factors also have to be considered. These include, whether the remuneration will be Job or Person Based; the degree of importance placed on performance and how its linked to remuneration; organisation’s position in the labour market (i.e. Pay Master or Low Payer) how important will...
2 Pages(500 words)Essay

...face a backlash. Already we saw an instance of this in the Bali bombings of 2002. With the IRA’s links with the Palestinian Liberation Organization, ETA and the Colombian militant group FARC, Australia is vulnerable to terror attacks from these organizations, if its foreign policy framework does not change. It is also no surprise that the media at large is hostile to IRA. Baring a few exceptions, the British media is undeniably biased against the IRA’s cause and its methods. Australian media, too, is similar to British media, especially when Rupert Murdoch controls a significant share of media in both nations. Part 2: 1. Bali bombings in October 2002 The Bali bombings of October 2002 are one chapter in the...
6 Pages(1500 words)Essay

...Law Assignment Omnibus crime control and safe streets act of 1968 Following the murder of the then president J F Kennedy, the state was compelled to act. The number of illegal guns that were with the populace was well above the tenable number. This act was thus formulated to help disarmer the people. This act thus formed the Law Enforcement Assistance Administration; this was a police force that was charged with the implementation of the mandate of this legislation. They thereafter set out top disarmer the general public in an exercise that was not at a very peaceful encounter. Those who came on the way of the force met abject disregard to human rights and values. Those who showed no slight interest in the human rights...
5 Pages(1250 words)Assignment

...work place discrimination Question 2 Throughout the Caribbean colonies, African labor emerged as the labor of choice because European plantation owners considered African laborers to be more efficient, valuable and cheaper than the native indentured servants that they previously used (Ba’ Nikongo, 152). The plantation life in the Caribbean colonies was characterized by African slaves working plantations as laborers for life. The slaves were often treated by the European plantation owners as property with no rights. Question 3 During the 1930s and 1940s, there were a number of individuals and organizations which focused on digging the history of Africans and Negroes. One of these...
1 Pages(250 words)Essay

...Answer the following questions Question The OSI strategy grew out of a necessity for international networking principles and is deliberated to facilitate interaction between software and hardware systems despite variances in underlying architectures (Blank 23). The OSI has generated a standard for communication among mechanical devices. Because of this a principle protocol for interaction between almost all computers has become simpler. The OSI framework has also assisted in the expansion of network communications by generating a standard for other gadgets like laptops, and palm pilots that are also able to link to local a wide area networks since the innovations of...
2 Pages(500 words)Admission/Application Essay

...1. Debra Hardison I chose the website http www.uiowa.edu/~acadtech/phonetics/. It provides animated libraries of the phonetic sounds of three different languages: English, German, and Spanish. Each letter has an animated articulatory diagram. An example is a stop, which is a consonant that is described a full obstruction of the outgoing stream of air, build up of air pressure, and release. I can use this for my own professional understanding of the stop, and other aspects of the language. The animated video can show learners how every speech organ part works, so that they can visualize better and follow it. The model gives exact video guidelines that can be easier to understand for students, since they can see organs that...
2 Pages(500 words)Essay

...Lecturer: Law Questions In question it is necessary to have tort law in order to provide compensation for the injured parties who have been affected by actions of offenders. The primary objective of criminal law is to punish the wrongdoers and promote order in the society while the tort law compels offenders to provide reimbursement to their victims in addition to promoting societal order. For instance, if a soft drink company fails to sieve its syrup effectively hence having some solid particles in their final product, any customer who suffers injuries after drinking it can sue the company for tort but not crime. In 2 (a), defamation refers to an act of damaging one’s good reputation....
2 Pages(500 words)Essay
sponsored ads
Save Your Time for More Important Things
Let us write or edit the assignment on your topic "Answer the following 2 questions seperately" with a personal 20% discount.
GRAB THE BEST PAPER

Let us find you another Assignment on topic Answer the following 2 questions seperately for FREE!