Comments (0)
Add to wishlistDelete from wishlist
Cite this document
Summary
Malaysian economy grows by more than six percent ever since 2008. However, it is expected that the economy of Malaysia will continue to grow and expand with…
Download full paperFile format: .doc, available for editing
HIDE THIS PAPERGRAB THE BEST PAPER97.1% of users find it useful 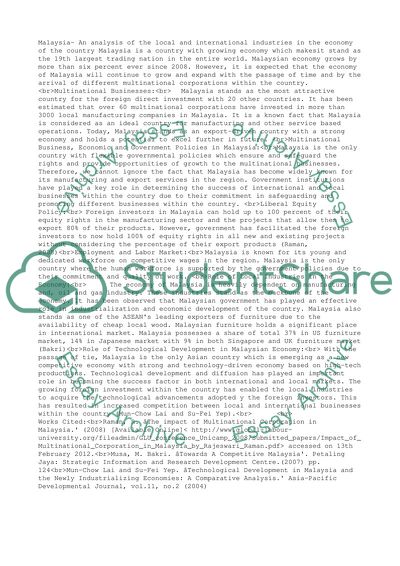 Malaysia- An analysis of the local and international industries in the economy of the country Malaysia is a country with growing economy which makesit stand as the 19th largest trading nation in the entire world. Malaysian economy grows by more than six percent ever since 2008. However, it is expected that the economy of Malaysia will continue to grow and expand with the passage of time and by the arrival of different multinational corporations within the country.
Multinational Businesses:
Malaysia stands as the most attractive country for the foreign direct investment with 20 other countries. It has been estimated that over 60 multinational corporations have invested in more than 3000 local manufacturing companies in Malaysia. It is a known fact that Malaysia is considered as an ideal country for manufacturing and other service based operations. Today, Malaysia stands as an export-driven country with a strong economy and holds a potential to excel further in future.
Multinational Business, Economic and Government Policies in Malaysia:
Malaysia is the only country with flexible governmental policies which ensure and safeguard the rights and provide opportunities of growth to the multinational businesses. Therefore, we cannot ignore the fact that Malaysia has become widely known for its manufacturing and export services in the region. Government institutions have played a key role in determining the success of international and local businesses within the country due to their commitment in safeguarding and promoting different businesses within the country.
Liberal Equity Policy:
Foreign investors in Malaysia can hold up to 100 percent of their equity rights in the manufacturing sector and the projects that allow them to export 80% of their products. However, government has facilitated the foreign investors to now hold 100% of equity rights in all new and existing projects without considering the percentage of their export products (Raman, 2008)
Employment and Labor Market:
Malaysia is known for its young and dedicated workforce on competitive wages in the region. Malaysia is the only country where the human workforce is supported by the government policies due to their commitment and quality of work.
Role of Local Industries in the Economy:
The economy of Malaysia is heavily dependent on manufacturing and, oil and gas industry. These industries stand as the backbone of the economy. It has been observed that Malaysian government has played an effective role in industrialization and economic development of the country. Malaysia also stands as one of the ASEAN’s leading exporters of furniture due to the availability of cheap local wood. Malaysian furniture holds a significant place in international market. Malaysia possesses a share of total 37% in US furniture market, 14% in Japanese market with 9% in both Singapore and UK furniture market (Bakri)
Role of Technological Development in Malaysian Economy:
With the passage of tie, Malaysia is the only Asian country which is emerging as a new competitive economy with strong and technology-driven economy based on high-tech productions. Technological development and diffusion has played an important role in becoming the success factor in both international and local markets. The growing foreign investment within the country has enabled the local industries to acquire the technological advancements adopted y the foreign investors. This has resulted in increased competition between local and international businesses within the country (Mun-Chow Lai and Su-Fei Yep).

CHECK THESE SAMPLES OF Malaysia

The Batek of Malaysia

...? The Batek of Malaysia The Batek are originally from Malaysia and are found in the rainforest of peninsular Malaysia. They gather food by hunting rather than animal husbandry and so their place of settlement varies within the limited boundaries of the area that they occupy. Around 800 members of the Batek community stay in Taman Negara which is a national park in the Malaysian peninsula. They are one of the groups of Malayan aborigines (Orang Asli) and from historic times they have always been gathering food by hunting and gathering natural resources (Bisht and Bankoti, 2004, p.100). This paper will focus on forage as primary mode of subsistence of the Batek population and its impact on...
6 Pages(1500 words)Research Paper

...? BATEK TRIBE OF MALAYSIA In our life we have “a web of values, meanings, and behavior” which is deeply infused in our everyday life. This is the essence of culture and it plays an important role in our lives (Nowak & Laird, 2010). In a particular habitat where human beings stay they are considered to be the “ecologically dominant component.” Humans have always appropriated nature including the living and inanimate ambience to suit their purpose. One thing has to be kept in mind that a change occurs in humans over time which is both cultural as well as biological. However humans have always adapted to the change and progressed (Schutkowski, 2006, pp. 3). Human beings have always selected established and refined modes of...
8 Pages(2000 words)Research Paper

The Batek of Malaysia

...? Running head: THE BATEK OF MALAYSIA The Batek of Malaysia First Middle initial and and Number Name July 18, 2011 ? The Batek are an indigenous group of people living in the rainforest of peninsular Malaysia. They are commonly referred to as “Orang Asli” which means “Original People” in Malay and is assumed to be first used by Austronesian-speaking settlers who arrived by boat from the islands of Southeast Asia. The Batek, who currently number about 800 (Center for Orang Asli Concerns, 2008), are foragers and use hunting and gathering as their primary mode of subsistence. They live a nomadic lifestyle and therefore the exact location of their settlements change within the general...
8 Pages(2000 words)Research Paper

...?Opportunities in Malaysian Consumerism Introduction An important sunshine industry in Malaysia today is the information and communication technology(ICT) industry. In the latter part of the 1990s, the Malaysian government has embarked on an ambitious project designed to make the country a future global leader in information technology by developing the information technology sector. (Pecotich & Schultz 2006, p. 428) ICT products and services, hence, can be considered as attractive areas of interest for Australian IT companies. This is highlighted by the fact that despite of the technological development that has transpired in Malaysia, certain areas are still in its infancy and industries such as...
5 Pages(1250 words)Essay

...?Malaysia Country profile Malaysia is one of the most vibrant economies of the south-east Asia. The country has shown several decades of phenomenal political stability and unmatched industrial growth. Malaysia is a multi-religious and multi-ethnic society with a majority of Muslim population both in the states and in the Chinese community. Malaysia is composed of two regions that are divided by the South China sea. Malaysia has three federal territories and 13 states. Malaysia has 89 per cent literacy rate and its population is 29.6 million (“More details on Malaysia”). Malaysia is a major tourist destination because of its scenic beauty and excellent beaches. 60 per cent of the population comprises ethnic Malays, 26 per cent... of the...
6 Pages(1500 words)Term Paper

... Malaysia Introduction. Country background Malaysia is a very interesting country to analyze. It is situated in Southern Asia. The neighboring countries of Malaysia are Thailand, Indonesia and Brunei from the land and Singapore, Vietminh and Philippines from the sea. The territory of the country is 127,320 sq. mi. The population of the country amounts to 22.2 million people. Malaysia is a federal constitutional monarchy and the head of the state is a king Yang di-Pertuan Agong. The king is elected by and among the nine hereditary heads of royal families. The political party in power is Barisan Nasional. The executive power is the Cabinet and the current Prime Minister is Najib Razak. Legal system is based on common law. Malaysia... is a...
4 Pages(1000 words)Research Paper

...Interventions Heart Disease- Malaysia Grade (March 25th, Interventions Heart Disease- Malaysia Problem Malaysia is a country is Asia that is faced by a completely different set of health problems compared to the other Asian countries. While malnutrition and other nutritional challenges face most of the countries is Asia, Malaysia is faced by major health problems characteristic of the developed economies in the world (Anand, et al. 2008). Thus, the heart disease is a major health challenge in Malaysia, which requires immediate intervention to control. Problem Context The rapid urbanization of Malaysia is one of the major factors that...
2 Pages(500 words)Essay
sponsored ads
Save Your Time for More Important Things
Let us write or edit the research paper on your topic "Malaysia" with a personal 20% discount.
GRAB THE BEST PAPER

Let us find you another Research Paper on topic Malaysia for FREE!