Comments (0)
Add to wishlist Delete from wishlist
Cite this document
Summary
This research aims to explore ethical integrity in business management. Ethics is about doing what is right, fair and just. Applied to business management, ethics refer to a set of principles and standards governing behaviors, values, and propriety of relational norms in managing a business. …
Download full paper File format: .doc, available for editing
HIDE THIS PAPERGRAB THE BEST PAPER97.5% of users find it useful 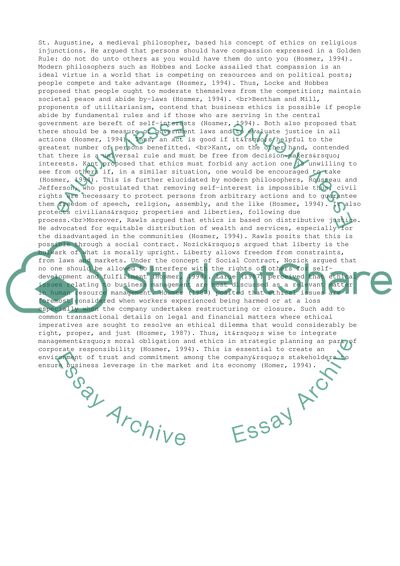 Extract of sample "Ethical Integrity in a Business"

Download file to see previous pages St. Augustine, a medieval philosopher, based his concept of ethics on religious injunctions. He argued that persons should have compassion expressed in a Golden Rule: do not do unto others as you would have them do unto you (Hosmer, 1994). Modern philosophers such as Hobbes and Locke assailed that compassion is an ideal virtue in a world that is competing on resources and on political posts; people compete and take advantage (Hosmer, 1994). Thus, Locke and Hobbes proposed that people ought to moderate themselves from the competition; maintain societal peace and abide by-laws (Hosmer, 1994).
Bentham and Mill, proponents of utilitarianism, contend that business ethics is possible if people abide by fundamental rules and if those who are serving in the central government are bereft of self-interests (Hosmer, 1994). Both also proposed that there should be a measure of government laws and to evaluate justice in all actions (Hosmer, 1994). Thus, an act is good if it’s helpful to the greatest number of persons benefitted.
Kant, on the other hand, contended that there is a universal rule and must be free from decision-makers’ interests. Kant proposed that ethics must forbid any action one is unwilling to see from others if, in a similar situation, one would be encouraged to take (Hosmer, 1994). This is further elucidated by modern philosophers, Rousseau and Jefferson, who postulated that removing self-interest is impossible thus, civil rights are necessary to protect persons from arbitrary actions and to guarantee them freedom of speech, religion, assembly, and the like (Hosmer, 1994). It also protects civilians’ properties and liberties, following due process.
Moreover, Rawls argued that ethics is based on distributive justice. He advocated for equitable distribution of wealth and services, especially for the disadvantaged in the communities (Hosmer, 1994). Rawls posits that this is possible through a social contract. Nozick’s argued that liberty is the bulwark of what is morally upright. Liberty allows freedom from constraints, from laws and markets. Under the concept of Social Contract, Nozick argued that no one should be allowed to interfere with the rights of others for self-development and fulfillment (Hosmer, 1994). Larue (1987) perceived that ethical issues relating to business management are most discussed as a relevant matter in human resource management. Hosmer (1987) posited that ethical issues are foremost considered when workers experienced being harmed or at a loss especially when the company undertakes restructuring or closure. Such add to common transactional details on legal and financial matters where ethical imperatives are sought to resolve an ethical dilemma that would considerably be right, proper, and just (Hosmer, 1987). Thus, it’s wise to integrate management’s moral obligation and ethics in strategic planning as part of corporate responsibility (Hosmer, 1994). This is essential to create an environment of trust and commitment among the company’s stakeholders to ensure business leverage in the market and its economy (Homer, 1994). ...Download file to see next pages Read More
Share:
Tags
Cite this document
(Ethical Integrity in a Business Literature review, n.d.)
Ethical Integrity in a Business Literature review. Retrieved from https://studentshare.org/management/1426930-ethical-integrity-in-a-business

“Ethical Integrity in a Business Literature Review”, n.d. https://studentshare.org/management/1426930-ethical-integrity-in-a-business.
Comments (0)
Click to create a comment or rate a document

CHECK THESE SAMPLES OF Ethical Integrity in a Business

While each force of globalization is important, the technological revolution has impacted the business models, value creation and differentiation (Spelman, 2010). The cloud computing technologies that have made the popular social networking applications possible are now being applied to development, healthcare, and society. Today mobile telephones are more like powerful computers that take care of many of the societal challenges facing both developed and developing countries (Evans, 2010). In Chile, new software enables weather information to farmers who can now make informed decisions on when and how to sow or harvest the crops. However, the fear or ignorance of cloud computing technology could harm the chances of the SMEs becomi...
7 Pages (1750 words) Coursework
sponsored ads
Save Your Time for More Important Things
Let us write or edit the literature review on your topic "Ethical Integrity in a Business" with a personal 20% discount.
GRAB THE BEST PAPER

Let us find you another Literature review on topic Ethical Integrity in a Business for FREE!