Comments (0)
Add to wishlistDelete from wishlist
Cite this document
Summary
This paper, Macroeconomics, stresses that with respect to the increase in smartphone prices from $200 to$222, there was a need to increase the supply from 10,000 units to 12,000 units. In that regard, the elasticity of supply becomes an important case to consider…
Download full paperFile format: .doc, available for editing
HIDE THIS PAPERGRAB THE BEST PAPER93.1% of users find it useful 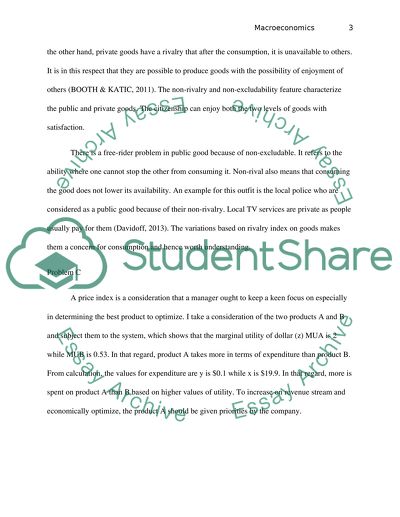 ﻿Problem A
With respect to the increase in smartphone prices from $200 to$222, there was a need to increase the supply from 10,000 units to 12,000 units. In that regard, the elasticity of supply becomes an important case to consider. After application of the case into the model for finding elasticity and in this case from the calculation of elasticity and using the prices and quantities provided, the result is that the Elasticity of supply is 1.7. It is an indication of that the stretch is by 1.7 hence a positive indicator. This shows that the supply is elasticity and hence can be considered by the company as a way to increase on the revenue stream.
Problem B
Public and private goods
Human being depends on goods and services to better their lives. In that design, the consumption of goods has a two state categorization; public and private. Public goods actually are goods, which are very hard to separate those who pay, and non-payers as the goods are in plenty. On the other hand, private goods are goods that can no longer be in use after their consumption. In that regard, people are easily made to pay for them (BOOTH & KATIC, 2011). Their availability after consumption separates the two types of goods.
Characteristics of public goods
Public goods are characterized by non-rivalry, which means that after consumption, there are still in plenty for others to enjoy it. In addition, non-excludability is a characteristic that occurs when it is impossible to produce a good without the possibility of others enjoying it. On the other hand, private goods have a rivalry that after the consumption, it is unavailable to others. It is in this respect that they are possible to produce goods with the possibility of enjoyment of others (BOOTH & KATIC, 2011). The non-rivalry and non-excludability feature characterize the public and private goods. The citizenship can enjoy both the two levels of goods with satisfaction.
There is a free-rider problem in public good because of non-excludable. It refers to the ability where one cannot stop the other from consuming it. Non-rival also means that consuming the good does not lower its availability. An example for this outfit is the local police who are considered as a public good because of their non-rivalry. Local TV services are private as people usually pay for them (Davidoff, 2013). The variations based on rivalry index on goods makes them a concern for consumption and hence worth understanding.
Problem C
A price index is a consideration that a manager ought to keep a keen focus on especially in determining the best product to optimize. I take a consideration of the two products A and B and subject them to the system, which shows that the marginal utility of dollar (z) MUA is 2 while MUB is 0.53. In that regard, product A takes more in terms of expenditure than product B. From calculation, the values for expenditure are y is $0.1 while x is $19.9. In that regard, more is spent on product A than B based on higher values of utility. To increase on revenue stream and economically optimize, the product A should be given priorities by the company.
References
BOOTH, A., & KATIC, P. (2011). Estimating the Wage Elasticity of Labor Supply to a Firm: What Evidence is there for Monopsony? Economic Record, 87(278), 359-369. doi:10.1111/j.1475-4932.2011.00728.x
Davidoff, T. (2013). Supply Elasticity and the Housing Cycle of the 2000s. Real Estate Economics, 41(4), 793-813. doi:10.1111/1540-6229.12019 Read More
Share:
Tags
Cite this document
(“Macroeconomics Assignment Example | Topics and Well Written Essays - 250 words - 6”, n.d.)
Macroeconomics Assignment Example | Topics and Well Written Essays - 250 words - 6. Retrieved from https://studentshare.org/macro-microeconomics/1700419-macroeconomics

CHECK THESE SAMPLES OF Macroeconomics

...? Macroeconomics The article selected for the project is “Do Tax Cuts Leads to Economic Growth” (Leonhardt, . The article is focused on the US economy and described about the impacts of tax cuts on the economic growth. The article is written in technical language of economics and it seems that the author has conducted an in depth analysis on the US Economy. Following is the evaluation of the article. 1. Principles of Economics & US Tax Cuts The article has beautifully covered the different economic indicators along with their projected movements on the basis of the proposed strategy by the current Govt. The author has identified, as well as, analyzed the impact of tax cuts by taking into consideration of the different...
10 Pages(2500 words)Essay

...?Hayek vis-a-vis Keynes Perhaps two of the most contrasting economist whose economic supposition is in almost diametric opposition against each otheris Friedrich August Hayek and John Maynard Keynes. Hayek was a stout defender of free market and classical liberal idea and against centralized planning and socialist economies while Keynes was for modern liberalism and espoused government intervention in a given economy to lift it from economic depression. Hayek totally abhorred collectivism believing that such structure can only be maintained by a centralized authority which could subsequently lead into totalitarianism. He believes that it is only free market, in contrast to a socialist or mixed economy, can coordinate an efficient... vis-a-vis ...
2 Pages(500 words)Essay

...? Macroeconomics Macroeconomic factors such as unemployment rate and inflation play a pivotal role in the national economy of the country. Rapid inflation takes away the benefit of rising GDP or in other words brings down the real GDP growth rate and thereby real income of the people. Similarly, high unemployment rate does not augur well for the economy as it tends to raise the income disparity among the people. The paper attempts to explore how unemployment and inflation can be tamed through policy matters. The US has experienced high unemployment and high inflation rates in the past. Both are equally bad for the national economy. Current GDP, Inflation and Unemployment Rate The US GDP in year 2012 is...
4 Pages(1000 words)Essay

...Macroeconomics Macroeconomics is a subdivision of economics that deals with the presentation, arrangement, and performance of a national or local economy as a whole. According to WordReference.com, "Macroeconomics is the branch of economics concerned with aggregates, such as national income, consumption, and investment ". The Economists Dictionary of Economics describes Macroeconomics as "The study of whole economic systems aggregating over the functioning of individual economic units. It is primarily concerned with variables which follow systematic and predictable paths of behavior and can be analyzed independently of the decisions of the many agents who determine their...
7 Pages(1750 words)Term Paper

...This paper examines one of the most important concepts in the field of economics, inflation. It covers in detail, and identifies the word ‘inflation’, and gives a brief explanation of the types of inflation that are prevalent in the world. Furthermore, the most important causes of inflation are also discussed, along with its effects on the whole economy. Introduction Since 2007, the world has experienced a severe recession, and many of the world’s economies has witnessed their citizens being unemployed. Corporations are firing people and getting rid of workers. This has resulted in a decrease in production, and hence, the world’s Gross Domestic Product (GDP). Other problems such as the crash of the housing market haven’t... paper examines ...
7 Pages(1750 words)Term Paper

...Nasser Al-Rayes Macroeconomics Fall Econ 201-004 Dr. Martin H. Sabo Macroeconomics is the branch of economics that deals with the economy as a whole. There are different kind of economic indicators that reflect the wellbeing of the people which include the gross domestic product, the rate of employment in the economy and the existing levels of the prices. There are several macroeconomic variables like the rate of interest, the national income, the savings and spending rates and the existence of trade in the country, that are have their effect on these indicators. These indicators and their relationship with the macroeconomic variables are best captured in the various...
10 Pages(2500 words)Essay

...Macroeconomics Expansionary Fiscal Policy A reduction in the production and sale of oil implies that UAE risks having a reduced economic growth rate. This can however be controlled through the application of proper fiscal policy tools. In order to stabilize or enhance its economic growth, UAE, should follow the expansionary fiscal policy (Larch & Nogueira, 2009). This policy will lead to increase in demand in the market in order to enhance economic growth. The expansionary fiscal policy will consist of: A raise in the government spending for commodities Lowering of taxes A combination of the increased government spending and lowering of taxes The Expansionary Fiscal Policy should be used with the objective of stabilizing...
4 Pages(1000 words)Research Paper

Let us find you another Assignment on topic Macroeconomics for FREE!