Comments (0)
Add to wishlist Delete from wishlist
Cite this document
Summary
The agricultural sector is one of the primary sectors in an economy. Production in this sector significantly influences the productivity of other sectors in the same economy…
Download full paper File format: .doc, available for editing
HIDE THIS PAPERGRAB THE BEST PAPER91.2% of users find it useful 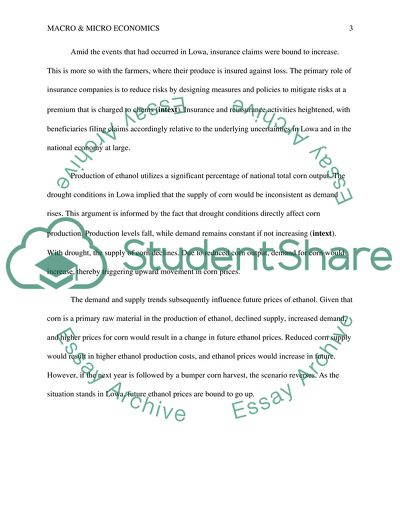 Corn and Ethanol Prices Affiliation: The economy is made up of numerous sectors, all of which contribute to the total output of that economy. The agricultural sector is one of the primary sectors in an economy. Production in this sector significantly influences the productivity of other sectors in the same economy. This is due to the fact that the output of the agricultural sector is used an input in other sectors. The article "Feeling Parched" highlights the consequences of drought in the production of corn, and the subsequent economic effects posed that occurrence in the State of Lowa and beyond.
Drought conditions in Lowa resulted in reduced corn output levels, posing significant threats to related activities that use corn in one way or another. The article outlines that due to declined corn harvests as a result of drought, corn prices went up. This scenario pushed up commodity prices of related products, especially processed corn products or complements to corn products (Dvorchak, 2012). Corn producers and corn product manufacturers were faced with critical decisions to make in relation to the appropriate course of action to be taken. While these scenarios were taking place in Lowa, their impacts were bound to be experienced across the entire economy.
The first category in this line is the farmers. While their output was low, market prices were going up. The implication of this was that supplies that they demanded became relatively expensive, especially those that were manufactured using corn; like livestock feed. Consequently, the farmers needed to reduce their livestock herds. To do so, they sold their livestock for slaughter. This increases livestock supply for slaughter purposes, triggering a fall in animal protein products in the meat markets. However, prices of processed corn products were going up, responding to low corn supply in the market.
Amid the events that had occurred in Lowa, insurance claims were bound to increase. This is more so with the farmers, where their produce is insured against loss. The primary role of insurance companies is to reduce risks by designing measures and policies to mitigate risks at a premium that is charged to clients (intext). Insurance and reinsurance activities heightened, with beneficiaries filing claims accordingly relative to the underlying uncertainties in Lowa and in the national economy at large.
Production of ethanol utilizes a significant percentage of national total corn output. The drought conditions in Lowa implied that the supply of corn would be inconsistent as demand rises. This argument is informed by the fact that drought conditions directly affect corn production. Production levels fall, while demand remains constant if not increasing (intext). With drought, the supply of corn declines. Due to reduced corn output, demand for corn would increase, thereby triggering upward movement in corn prices.
The demand and supply trends subsequently influence future prices of ethanol. Given that corn is a primary raw material in the production of ethanol, declined supply, increased demand, and higher prices for corn would result in a change in future ethanol prices. Reduced corn supply would result in higher ethanol production costs, and ethanol prices would increase in future. However, if the next year is followed by a bumper corn harvest, the scenario reverses. As the situation stands in Lowa, future ethanol prices are bound to go up.
References
Dvorchak, G. (2012). "Feeling Parched". Consumer Cyclicals. The Street, Inc.:
http://www.realmoney.thestreetcom/articles/08/15/2012/feeling-parched Read More
Share:
Tags
Cite this document
(“Corn and Ethanol Prices Assignment Example | Topics and Well Written Essays - 500 words”, n.d.)
Corn and Ethanol Prices Assignment Example | Topics and Well Written Essays - 500 words. Retrieved from https://studentshare.org/macro-microeconomics/1601967-corn-and-ethanol-prices

CHECK THESE SAMPLES OF Corn and Ethanol Prices

...﻿ MSc PROGRAMME PROJECT PROPOSAL An Evaluation as To the Relationship of Corporate Returns from Stock Prices 1. Background and Context 1.1 Outline the context of the proposed research The context of the propose research assumes that businessmen and investors make decisions each day. They normally look at the financial statement of the corporations to see the profitability of the same make investment decision. They do however has may many choices. This thesis of the paper will be to defend The Proposition The Higher Profitability Means Higher Stock Prices. 1.2 Outline the motivation of your study The study is motivated by interesting reality that not all corporations are earning and yet these corporations have...
8 Pages (2000 words) Research Proposal

...Dear Sirs, Review of Energy Use in BBE Ethanol Production Processes As we approach the first anniversary since the commissioning of GSMI upgraded ethanol plant, we consider it to be timely as well as necessary to provide a report on our review of the operational costs associated with the ethanol production at the upgraded plant During the recorded 203 days from January to September 2010, certain deficiencies have been identified, all of which have contributed to the increased operational costs which were not foreseen before. It was noted that although the production targets have consistently been achieved, this has equally but questionably increased the production costs. This review presents certain factors that have been painstakingly...
8 Pages (2000 words) Assignment

...﻿Vegetable Prices Likely to Fall The price of vegetables is set to crash in the coming months as the weather cools and an influx of new produce enters the market. Warana Fruit Shed fruit and vegetable manager Jon Clinch expects vegetable prices to go down by almost 50% in the next two to three months as winter settles in. “A lot of farmers replanted not too long ago. We will be seeing everything coming back to normal price range in the coming months but vegetables will be the quickest,” he said. Broccoli, which was yesterday priced at $6.99/kg in store, could drop down to as low as $2.99/kg. Other winter vegetables, such as cauliflower and cabbage, will see similar reductions. Fruit would eventually follow, but would not drop as much, he...
6 Pages (1500 words) Article

The dilemma on evaluating safety in consumption of organic foods is aimed to be resolved and explained in the light of taking various perspectives most crucial to its understanding.
Clearly expounded on Pollan’s book by providing the gist, to wit: “Pollan explains in satisfying detail how American food production, once sun-based, became fossil-fuel based: Instead of using the sun to grow grass to feed cows, we now use fossil fuels to process corn into feed for pigs and cows—and to process corn into feed for humans” (Cowen, 2006, par. 2). The author likewise indicated both strengths and weaknesses of Pollan’s book, particularly in its shortsightedness in encompassing macroeconomic perspectives in h...
2 Pages (500 words) Annotated Bibliography

Relationship between Monentry Policy and Asset prices: Evidence from UK and US

...Relationship between Monetary Policy and Asset prices: Evidence from UK and US Introduction Asset costs as dictated by market patterns are a sensitive indicator of economic performance at various economic times. Economic interventions are formulated to control economic performance factors and instigate economic protection in times of uncertainty. One of such interventions is the monetary policy which targets money circulation and supply within the economy and is aimed at instilling economic stability as well as economic growth. Market patterns have various observable changes in the economy one of which is inflation, which is represented by increases in prices of goods, assets and services during a specified period of time. It is usually...
8 Pages (2000 words) Literature review

To investigate and analyze the entire food chains of human food habits, Pollan throws an in-depth light on each of the food chains initiating from the industrial food to the final source of the final meal.
The book is divided into three neat parts, bearing the titles, ‘Industrial Corn’, ‘Pastoral Grass’ and ‘Personal the Forest’. Apart from this, there is also one introduction bearing the title, ‘Our Natural Eating Disorder’. ‘Industrial Corn’ is the first part of the book and it contains seven chapters. In this portion of the book, Pollan tends to explore the food chain from which the vast variety of American meals evolve. This portion of the book also throws light...
10 Pages (2500 words) Coursework

...﻿Input Prices and R&D Allocation Analysis for Tablet Development Corporation Table of Contents 1 Introduction 2 Development of Pricing and R&D Allocation Strategy 3 Analysis of Tablet Development Corp. Performance 4 Conclusion References Annexes 1 Introduction Tablet Development is focused on providing high quality and custom designed applications for tablets manufacturers and operating system providers. Its core products are X5, X6 and X7 that have been in the market for the last 2 years. However, there are major drawbacks in the existing price and R&D budget allocation strategies that have undermined the new product development cycle in the organization. In order to bring a revolution in the existing business practices...
7 Pages (1750 words) Research Paper
sponsored ads
Save Your Time for More Important Things
Let us write or edit the assignment on your topic "Corn and Ethanol Prices" with a personal 20% discount.
GRAB THE BEST PAPER

Let us find you another Assignment on topic Corn and Ethanol Prices for FREE!