Comments (0)
Add to wishlistDelete from wishlist
Cite this document
Summary
This paper highlights that the strategy of price discrimination is the policy in which customers are grouped on the basis of some criteria and different prices are fixed for each group for the same product or service. This strategy is followed to increase profit. …
Download full paperFile format: .doc, available for editing
HIDE THIS PAPERGRAB THE BEST PAPER97.5% of users find it useful 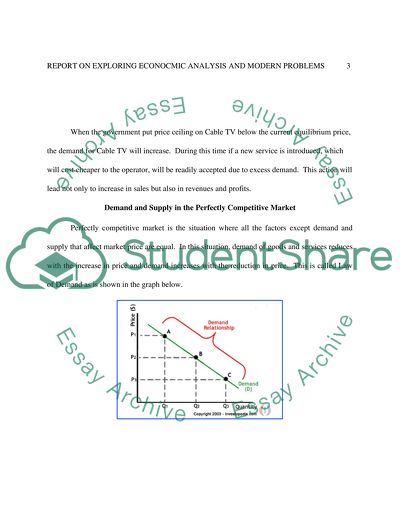 Report on exploring economic analysis and modern problems and the economic way of thinking. Price Discrimination Strategy The strategy of price discrimination is the policy in which customers are grouped on the basis of some criteria and different prices are fixed for each group for the same product or service. This strategy is followed to increase the profit. There are two groups in the town one group is that of local people and other is that of visitors to town. By increasing the price for the visitors by 25% than that of local people revenues can be increase tremendously
Price ceiling and Equilibrium Price
When a law restricts the seller to charge any product or service to a certain limit and not beyond that, it is called the price ceiling. It means the amount of maximum money one can charge for providing a product or service.
The price, at which the demand of a product in the market equals its supply, is called an Equilibrium Price. Excess demand or excess supply makes Disequilibrium. By putting a Price Ceiling below the Equilibrium Price creates Disequilibrium which will make the demand in excess of supply as is shown in the graph below:-
When the government put price ceiling on Cable TV below the current equilibrium price, the demand for Cable TV will increase. During this time if a new service is introduced, which will cost cheaper to the operator, will be readily accepted due to excess demand. This action will lead not only to increase in sales but also in revenues and profits.
Demand and Supply in the Perfectly Competitive Market
Perfectly competitive market is the situation where all the factors except demand and supply that affect market price are equal. In this situation, demand of goods and services reduces with the increase in price and demand increases with the reduction in price. This is called Law of Demand as is shown in the graph below.
When the demand for the product falls, the prices in the market will start to come down. In the short run, profits of the company will fall and in the long run the number of firms will decrease due to reducing profits.
When the demand for the product rises, the prices in the market will shoot up and go high. In the short run, profits of the company will increase and in the long run the number of firms will increase. New firms will be added to produce more products to meet the increased demand.
Long run Average Cost Curves
Long run Average Cost curve shows the average cost of production during the longer period of time. The production is done by selection of inputs that will cost lowest to produce a desired output.
Some long-run average cost curves are steeper on the downward side than others. This happens to the largest firms who tend to have cost advantage. It indicates that the industry is tending to become a monopoly, and hence is called a natural monopoly. Natural monopolies tend to exist in industries with high capital costs in relation to variable costs, such as water supply and electricity supply.
Price discrimination of time
The new product when launched is unique and there is hardly any competitive product alternative. However, as the time pass by and demand increases, the competitors come up with better product and cheaper price. So whenever we buy a new digital camera it will have higher price than six months later as by that time new competitors and technologies and products have entered.
The rationale and implications
The rationale behind the new guidelines by the Department of Justice and the Federal Trade Commission for evaluating proposed mergers is to ensure that the competitiveness of the market is not jeopardized and that the merger does not become a big monopoly supplier.
The implications of these guidelines is that billions of mergers occurred each year is now to be held up and first scrutinized by applying a range of analytical tools to evaluate competitive concerns in a limited period of time. There is now going to be a check and accountability of any major move by giant trading groups to monopolize and raise profits through unfair means.
References
Investopedia (2003). Economics basics: demand and supply. (n.d.). Retrieved from http://www.investopedia.com/university/economics/economics3.asp Read More
Share:
Tags
Cite this document
(“Write a report that answers questions that explore economic analysis Term Paper”, n.d.)
Write a report that answers questions that explore economic analysis Term Paper. Retrieved from https://studentshare.org/macro-microeconomics/1578248-write-a-report-that-answers-questions-that-explore-economic-analysis-and-modern-problems-and-the-economic-way-of-thinking

Media is largely responsible for influencing their viewers or listeners in a variety of ways. It could be as simple as the viewer changing his/her hairstyle to copy the exact look of a celebrity seen on television or in magazines, but for others, media can take over their lives and influence them to think differently. Although not a box-office hit, Crash was given good reviews by critics and the movie even managed to win the Best Picture Award in 2005 at the Oscars (Oscars.org, 2008), including two nominations for two Golden Globe Awards (Goldenglobes.org). This paper has analyzed the movie in the historical context, wherein it is discussed how different races have been perceived by different people for many years through the powe...
7 Pages(1750 words)Term Paper

The price at this equilibrium was P0 and the Number of Laptops was Q0.
As the demand fell due to the reasons discussed below, the demand curve shifted to left, D1. If the prices were to stay at P0, the quantity demanded, Qx would have been much lower than quantity supplied, Q0. In order to increase consumer demand, firms would have to reduce the laptop prices until it reaches the new equilibrium level, P1. At this point, the market is in equilibrium. The reduction in price increases the demand and the new quantity of laptops in the market would be Q1.
The most basic thing to consider in determining the price of a laptop is the technology used in it (Neidalos, 2010). Technology advances at a very rapid pace in today&rsquo...
6 Pages(1500 words)Case Study
sponsored ads
Save Your Time for More Important Things
Let us write or edit the term paper on your topic "Price Discrimination Strategy" with a personal 20% discount.
GRAB THE BEST PAPER

Let us find you another Term Paper on topic Price Discrimination Strategy for FREE!