Financial Crisis of the US in 2008 - Coursework Example

Comments (0)
Add to wishlist Delete from wishlist
Cite this document
Summary
The paper "Financial Crisis of the US in 2008" highlights that the current financial crisis started due to some untimely and inefficient decisions and overlooking of the risk factors by the financial institutions in the US. It is affecting the economy of the US by its negative impact on GDP, employment and trade…
Download full paper File format: .doc, available for editing
HIDE THIS PAPERGRAB THE BEST PAPER91.5% of users find it useful 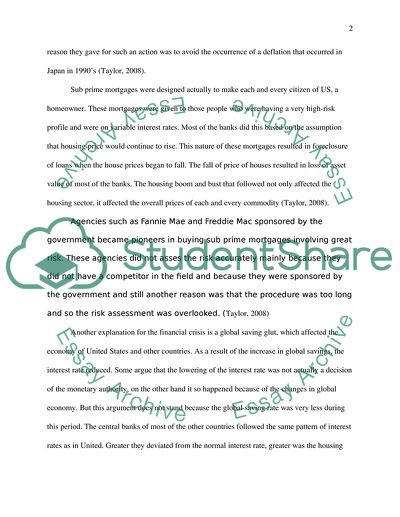 Extract of sample "Financial Crisis of the US in 2008"

Download file to see previous pages To analyze the evolvement of the current financial crisis, its effects on the economy of United States as well as its financial market, some of the problems the United States may face in the future and also discuss some of the short term and long term solutions.
According to Taylor (2008) financial crisis is the result of monetary or any other form of excesses, which leads to a boom and results in a bust. It can also occur when financial institutions or assets lose their value (Kindleberger and Aliber (2005). It is also characterised by the reduction in the flow of credit to businesses and households (Jickling, 2008). During the period from 2000 to 2007, the monetary policy by the Federal Reserve was highly flexible and easy to follow. Loans and mortgages were easily available even when there were no evident means to repay it. The Federal Reserve lowered the interest rate compared to those prevalent at the time before the crisis. They even explained that the lowering of the interest period would be only for a short period of time and that after that time the interest rate would be restored to normal by slowly increasing it at a fixed rate. Thus it is quite evident that the lowering of the interest rate, which resulted in monetary excess, was actually a wrong decision by the Federal Reserve. The reason they gave for such an action was to avoid the occurrence of deflation that occurred in Japan in the 1990s (Taylor, 2008).
Subprime mortgages were designed actually to make each and every citizen of the US, a homeowner. These mortgages were given to those people who were having a very high-risk profile and were on variable interest rates. Most of the banks did this based on the assumption that housing prices would continue to rise. This nature of these mortgages resulted in the foreclosure of loans when the house prices began to fall. The fall of the price of houses resulted in a loss of asset value for most of the banks. ...Download file to see next pages Read More
Share:
Tags
Cite this document
(Economical changes during 2008-09 financial crisis Coursework, n.d.)
Economical changes during 2008-09 financial crisis Coursework. https://studentshare.org/macro-microeconomics/1555964-economical-changes-during-2008-09-financial-crisis

CHECK THESE SAMPLES OF Financial Crisis of the US in 2008

88 Pages (22000 words) Case Study
sponsored ads
Save Your Time for More Important Things
Let us write or edit the coursework on your topic "Financial Crisis of the US in 2008" with a personal 20% discount.
GRAB THE BEST PAPER

Let us find you another Coursework on topic Financial Crisis of the US in 2008 for FREE!