Comments (0)
Add to wishlistDelete from wishlist
Cite this document
Summary
The author states that economic depression can be mitigated by marginalizing fluctuations in aggregate demand. Marginalizations of vacillations of aggregate demand are usually and efficiently done with political, governmental policies such as stimulus packages.  …
Download full paperFile format: .doc, available for editing
HIDE THIS PAPERGRAB THE BEST PAPER98.6% of users find it useful 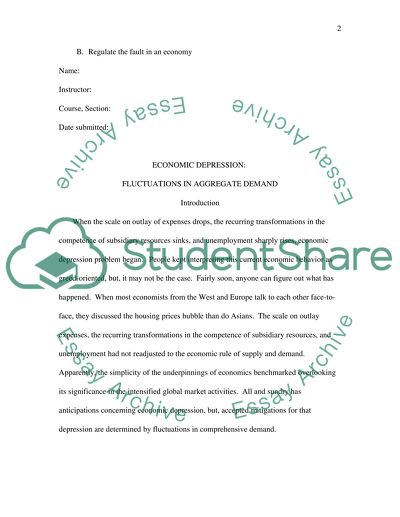 Download file to see previous pages Apparently, the simplicity of the underpinnings of economics benchmarked overlooking its significance in the intensified global market activities. All and sundry has anticipations concerning economic depression, but, accepted mitigations for that depression are determined by fluctuations in comprehensive demand.
Surveillance about economic depression began about 1929. Snowdon and Vane (2) mentioned Aldcroft (1993) and Romer (1993) who did a study on the economic conditions of the country. They discovered that somewhere between the years 1929 and 1932; the United States economy saw a dip in its business output. This was reflected in the Gross Domestic Product report, hand in hand with the sharp rise in unemployment. As Aldcroft and Romer study revealed, probably most people were not aware that trade and industry productivity degenerated; unemployment rose and contributed to the economic downturn.
Economic depression depends on unseen margins, and those boundaries move with productivity and employment in the economy (Snowdon and Vane 2). So that the economic situation may get better or worst, depending on the nation's leadership to move forward or be diffident. Snowdon and Vane supposed John Maynard Keynes in 1936 were right in his theory of employment, interest, and money. Further, they said:
“The implication of Keynes analysis was that government intervention, in the form of discretionary fiscal and monetary policy, could help correct such aggregate instability and stabilize the economy at full employment” (Snowdon and Vane 2).
In a scenario where economic stability is lower than a probable gross domestic product, it is most likely that consumers spend less (Baumol and Blinder, 588) because in reality they really do not have anything to be spent on either goods or services despite needs.   ...Download file to see next pagesRead More
Share:
Tags
Cite this document
(Economic Depression: Fluctuations in Aggregate Demand Term Paper - 1, n.d.)
Economic Depression: Fluctuations in Aggregate Demand Term Paper - 1. Retrieved from https://studentshare.org/macro-microeconomics/1549039-macroeconomices

CHECK THESE SAMPLES OF Economic Depression: Fluctuations in Aggregate Demand

The phenomenon of globalization of markets has resulted in both advantages and disadvantages. It has resulted in the convergence in the requirement of features in a product and augmentation of the intensity of B2B and B2C communica...
7 Pages(1750 words)Coursework

The concept of globalization encompasses theories beyond the traditional view that global corporations merely do business abroad....
7 Pages(1750 words)Coursework
sponsored ads
Save Your Time for More Important Things
Let us write or edit the term paper on your topic "Economic Depression: Fluctuations in Aggregate Demand" with a personal 20% discount.
GRAB THE BEST PAPER

Let us find you another Term Paper on topic Economic Depression: Fluctuations in Aggregate Demand for FREE!