Comments (0)
Add to wishlistDelete from wishlist
Cite this document
Summary
The author states that the emergence of the concept of economic power makes the monopoly model worthy of scholastic attention. The presence of the conventional firm places monopoly theory in the crime scene because of the comparable attributes of a colossal firm to monopolistic corporate power.  …
Download full paperFile format: .doc, available for editing
HIDE THIS PAPERGRAB THE BEST PAPER99% of users find it useful 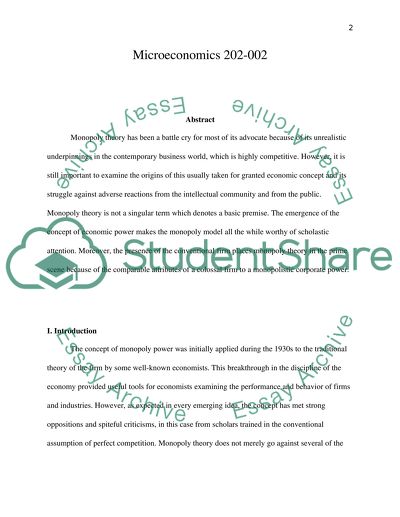 Extract of sample "The Microeconomics of Power: Monopoly Theory"

Download file to see previous pages The concept of monopoly power was initially applied during the 1930s to the traditional theory of the firm by some well-known economists. This breakthrough in the discipline of the economy provided useful tools for economists examining the performance and behavior of firms and industries. However, as expected in every emerging idea, the concept has met strong oppositions and spiteful criticisms, in this case from scholars trained in the conventional assumption of perfect competition. Monopoly theory does not merely go against several of the principles of perfect competition but roused significant doubts on the good organization of laissez-faire capitalism itself (Cleaver 2004).
While the new-fangled theory had attracted numerous disbelievers, it was also strongly protected from criticisms. Since the first monopoly framework was derived from perfect competition, the two theories are much in common in terms of their opinion about “profit maximization, marginal analysis, and mathematical rigor” (Karier 1994: 27). It was easier said than done for advocates of perfect competition to hit on the assumptions in the monopoly model without disparaging their own. Provided with little prospect of locating lapses in the new theory, critics were disposed to plainly disregard it or relegate monopoly as nothing more than an unusual occurrence in the actual economy (ibid).
The introduction of monopoly theory into conventional economics was both a success and a disappointment. It was a success because it made available an alternative to the romanticized model of perfect competition. Yet, it was also a disappointment since the circumstances for the typical monopoly framework were ordinarily just as idealized and confusing as perfect competition. Where perfect competition necessitates an unlimited population of firms manufacturing identical products, the monopoly model takes on an exclusive producer in a market (Semmler 1984).   ...Download file to see next pagesRead More
Share:
Tags
Cite this document
(The Microeconomics of Power: Monopoly Theory Term Paper, n.d.)
The Microeconomics of Power: Monopoly Theory Term Paper. Retrieved from https://studentshare.org/macro-microeconomics/1549037-microeconomices

CHECK THESE SAMPLES OF The Microeconomics of Power: Monopoly Theory

The housing industry is divided into residential, commercial and industrial segments. Economists define supply in terms of service units, that is, a physical unit can be deconstructed into the services that it helps provide. These housing unit services are considered as an unobservable theoretical construct. Housing stock depreciates making it qualitatively different from a brand new constructed building.
The owner, user/owner and renter comprise the demand side of the housing market while the renovators and developers comprise the supply side of the market. In order to implement the simple demand and supply analysis to the housing markets, several modifications have to be made to the standard microeconomic procedures and ass...
8 Pages(2000 words)Research Paper
sponsored ads
Save Your Time for More Important Things
Let us write or edit the term paper on your topic "The Microeconomics of Power: Monopoly Theory" with a personal 20% discount.
GRAB THE BEST PAPER

Let us find you another Term Paper on topic The Microeconomics of Power: Monopoly Theory for FREE!