Comments (0)
Add to wishlistDelete from wishlist
Cite this document
Summary
The author state Cyprus can expand and diversify its economy. While tourism would continue to remain an important source of income, the decline in tourism could perhaps become the reason for Cyprus to look for other opportunities for the growth of the island.  …
Download full paperFile format: .doc, available for editing
HIDE THIS PAPERGRAB THE BEST PAPER91.6% of users find it useful 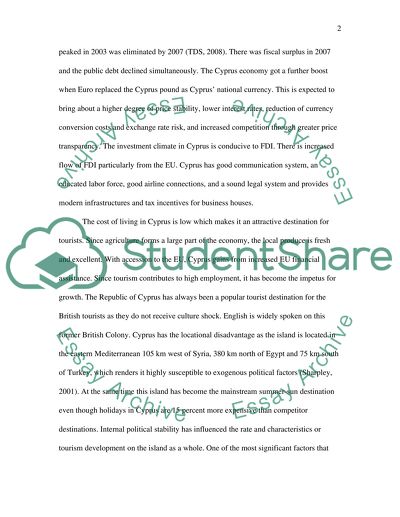 Extract of sample "Economy and Tourism of Cyprus"

Download file to see previous pages Cyprus as a whole is now an open, free-market, services-based economy with some light manufacturing (TDS, 2008). Since 1st May 2004, Cyprus has accession to the European Union, which is an important milestone in its recent economic development. The Cypriots are the most prosperous people in the Mediterranean region. It has a good, educated English-speaking population, good airline connections, and excellent telecommunications.
The economic activity in Cyprus had been based on agriculture in the past but in the past two decades, there has been a shift towards light manufacturing and services. Today agriculture contributes only 3.2% to the GDP while industry and construction contribute 19.2 percent and the services sector including tourism contribute 77.6% to the GDP employing 72.1% of the labor force (TDS, 2008). Cyprus has very few proven natural resources although the government is trying to explore the possibilities for offshore oil and gas reserves off its southern coast.
The GNP growth rates have declined as the Cyprus economy has matured over the years. Public finances have improved considerably and the fiscal deficit which had peaked in 2003 was eliminated by 2007 (TDS, 2008). There was a fiscal surplus in 2007 and the public debt declined simultaneously. The Cyprus economy got a further boost when Euro replaced the Cyprus pound as Cyprus’ national currency. This is expected to bring about a higher degree of price stability, lower interest rates, reduction of currency conversion costs and exchange rate risk, and increased competition through greater price transparency. The investment climate in Cyprus is conducive to FDI. There is an increased flow of FDI, particularly from the EU. Cyprus has a good communication system, an educated labor force, good airline connections, and a sound legal system and provides modern infrastructures and tax incentives for business houses.   ...Download file to see next pagesRead More
Share:
Tags
Cite this document
(Economy and Tourism of Cyprus Term Paper Example | Topics and Well Written Essays - 1500 words, n.d.)
Economy and Tourism of Cyprus Term Paper Example | Topics and Well Written Essays - 1500 words. Retrieved from https://studentshare.org/macro-microeconomics/1546415-economy-and-tourism-of-cyprus

CHECK THESE SAMPLES OF Economy and Tourism of Cyprus

The scarcity of natural resources in South Korea did not hinder the ingenuity of its people in realizing that there is an economic aspect that it has the highest strength, the labor force. The modern economic development enjoyed by many of the citizens of the country was established by its strong labor force. Nevertheless, the success of Korea’s lift towards industrialization is not primarily due to its emphasis on technological advancements but its reliance and a great investment in human resource development and in persuading large companies to compete in the global markets (Chung 2007).
This research proposal will deal with two themes; the first one is the changing relationship between industrial relations and human...
15 Pages(3750 words)Research Proposal

Economic systems are crucial to the progress of a nation for they shape the way a nation’s economy operates. There are three major types of economic systems, namely: A planned economy which operates at the sheer instructions of the Government; Market Economy has complete independence in its operations and is at the disposal of the market forces of demand and supply, Mixed Economy is an amalgamation of features from both the previously mentioned economic systems and therefore has economy operating tools which are shared by the private sector and the public sector, hence it could be regarded as a balanced mixture of the political ideologies of capitalism and socialism (Schlesinger, 1962). A mixed economy is an intricate and co...
6 Pages(1500 words)Coursework
sponsored ads
Save Your Time for More Important Things
Let us write or edit the term paper on your topic "Economy and Tourism of Cyprus" with a personal 20% discount.
GRAB THE BEST PAPER

Let us find you another Term Paper on topic Economy and Tourism of Cyprus for FREE!