Comments (0)
Add to wishlistDelete from wishlist
Cite this document
Summary
The author states that the role of insurance cannot be downplayed as a risk management tool in today’s banking world. Banks are able to distinguish between an insurable risk and an uninsurable one. This helps them reduce the uninsurable risks by constant loss-prevention efforts…
Download full paperFile format: .doc, available for editing
HIDE THIS PAPERGRAB THE BEST PAPER98.8% of users find it useful 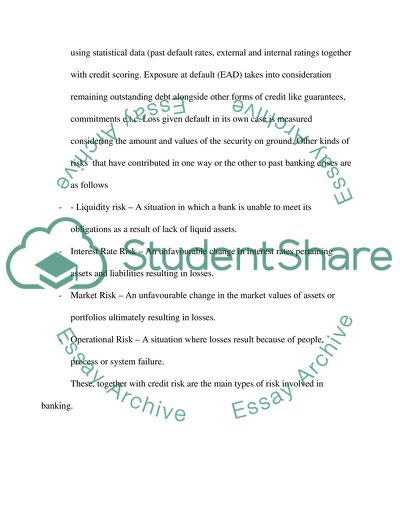 Download file to see previous pages The role of banks in the growth of an economy cannot be overemphasized; this is because banks represent the main channel by which funds can flow from lenders to borrowers. In addition to this, it plays the role of a custodian for valuables such as gems, will; money e.t.c. investments can also be facilitated and banks where they act as agents to customers. If for one reason or the other, a bank is unable to meet this statutory obligation, the resultant is a banking crisis, the banks are then said to have failed.
Another terminology that requires definition is a credit risk. This can alternatively be referred to as Expected Loss and is a product of Probability of default, Exposure of default and loss gave default. These three factors which are considered in credit risk all have standard measurement yardsticks against which they are calculated. Probability of default (PD) is measured using statistical data (past default rates, external and internal ratings together with credit scoring. Exposure at default (EAD) takes into consideration remaining outstanding debt alongside other forms of credit like guarantees, commitments e.t.c. Loss given default in its own case is measured considering the amount and values of the security on the ground.
In the 1970's Western European and American banks were involved in credit risk and its attendant problems when they loaned out deposits of oil-rich OPEC countries to oil-poor undeveloped countries. The expected profits from these loans never materialized because the borrowing nations defaulted in payment. To further complicate the issue some banks within the period made out loans to just one nation that amount to a substantial part of their assets. In the events of a default in payment by this nation, the bank in question is sure to incur such a loss capable of precipitating financial crises. In modern-day banking, banks try to minimize losses by greatly dispersing their credit risk. It could be by arranging it in such a way that the risks are not concentrated in the country or by spreading risk over different sectors of an economy. This is an improvement of what obtained in the past. Risks, nowadays, are spread to withstand world-shaking defaults.
Risk Management is the process of reducing the threat of loss due to uncontrollable events. There has been a continued improvement in Risk management over the years with four major approaches being adopted. The first approach is Risk Avoidance, and this approach may be adopted when the risk involved in a particular venture far outweighs whatever gains that might result. ...Download file to see next pagesRead More
Share:
Tags
Cite this document
(Risk Management in Banking Assignment Example | Topics and Well Written Essays - 1500 words, n.d.)
Risk Management in Banking Assignment Example | Topics and Well Written Essays - 1500 words. Retrieved from https://studentshare.org/macro-microeconomics/1523482-international-banking

CHECK THESE SAMPLES OF Risk Management in Banking

.... In this case, it is important for managers to familiarise themselves with what actually constitutes resistance to change so that they can address the underlying causes and how to reduce them. There are a number of reasons why persons may resist change within any one given organisation. First of all, some people may resist change because they do not understand the effects that may arise out those changes. This is usually the case when managers have not gone out of their way to explain these effects to the important stakeholders. Consequently, in order to avoid the risk that may arise out of that change, employees would rather resist it first. Managers can deal with this problem by clarifying out issues before hand. (Kirkman, 2000...
10 Pages(2500 words)Coursework

It now directs and supervises banking activities through a complex set of tools and instruments that embody the country’s monetary policies.
Central banking can be traced to the 17th century Swedish Riksbank. The bank was created in 1668 as a joint-stock bank and helped the Swedish government with its monetary needs as well as serve as a clearinghouse for commerce. Just a few decades after, or in 1694, England established its own joint-stock bank called Bank of England. It was established primarily to buy the country’s debts. Other European countries soon followed and established their own national banks not only to serve their debts but also to solve monetary disarray as in the case of France’s Banque de Fr...
7 Pages(1750 words)Case Study

Civil Aviation Administration of China (CAAC) – undoubtedly advanc...
7 Pages(1750 words)Assignment
sponsored ads
Save Your Time for More Important Things
Let us write or edit the assignment on your topic "Risk Management in Banking" with a personal 20% discount.
GRAB THE BEST PAPER

Let us find you another Assignment on topic Risk Management in Banking for FREE!