How Do Tariffs Affect Different Sectors of an Economy - Coursework Example

Comments (0)
Add to wishlistDelete from wishlist
Cite this document
Summary
The paper "How Do Tariffs Affect Different Sectors of an Economy" highlights that the US has proposed the World Trade Organization to remove all tariffs from industrial and consumer goods by 2015. This would benefit both developed and developing countries…
Download full paperFile format: .doc, available for editing
HIDE THIS PAPERGRAB THE BEST PAPER98.2% of users find it useful 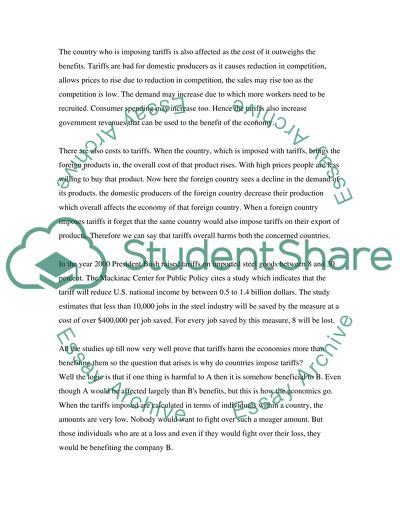 Download file to see previous pages Tariffs we can say have generally fallen in the post World War 2 period as the industrialized world has moved to desirably free trade between organizations.
Tariffs do not cost too much for the economy. World Bank estimates that if all these tariffs were removed, the global economy would increase by 830 billion dollars by 2015. The economic effects of tariffs are on those countries, which are either imposing tariffs, or tariffs are being imposed on them.
Foreign tariffs on a country increase the cost of domestic producers, which causes them to sell less in those foreign countries. According to Robert Longley. (2002). He states in his article US Nails Tariff on Canadian Lumber the American tariffs have cost the Canadian Lumber producers around 1.5 billion Canadian dollars. This has resulted in the reduction in production and cut down of jobs as the demand of product goes down. This all impacts other industries and the overall impact of the economy of the nation.
The country who is imposing tariffs is also affected as the cost of it outweighs the benefits. Tariffs are bad for domestic producers as it causes a reduction in competition, allows prices to rise due to a reduction in competition, the sales may rise too as the competition is low. The demand may increase due to which more workers need to be recruited. Consumer spending may increase too. Hence the tariffs also increase government revenues that can be used to the benefit of the economy. There are also costs for tariffs. When the country, which is imposed with tariffs, brings foreign products in, the overall cost of that product rises. With high prices, people are less willing to buy that product. Now here the foreign country sees a decline in the demand for its products. the domestic producers of the foreign country decrease their production which overall affects the economy of that foreign country. When a foreign country imposes tariffs it forgets that the same country would also impose tariffs on their export of products. Therefore we can say that tariffs overall harms both the concerned countries.
In the year 2000, President Bush raised tariffs on imported steel goods between 8 and 30 per cent. The Mackinac Center for Public Policy cites a study which indicates that the tariff will reduce U.S. national income by between 0.5 to 1.4 billion dollars. The study estimates that less than 10,000 jobs in the steel industry will be saved by the measure at a cost of over $400,000 per job saved. For every job saved by this measure, 8 will be lost.
All the studies up till now very well prove that tariffs harm the economies more than benefiting them so the question that arises is why do countries impose tariffs
Well, the logic is that if one thing is harmful to A then it is somehow beneficial to B. Even though A would be affected largely than B's benefits, but this is how the economics go. When the tariffs imposed are calculated in terms of individuals within a country, the amounts are very low. Nobody would want to fight over such a meager amount.  ...Download file to see next pagesRead More
Share:
Tags
Cite this document
(How Do Tariffs Affect Different Sectors of an Economy Coursework, n.d.)
How Do Tariffs Affect Different Sectors of an Economy Coursework. Retrieved from https://studentshare.org/macro-microeconomics/1519268-tariffs-and-free-trade

“How Do Tariffs Affect Different Sectors of an Economy Coursework”, n.d. https://studentshare.org/macro-microeconomics/1519268-tariffs-and-free-trade.
Comments (0)
Click to create a comment or rate a document

Economic systems are crucial to the progress of a nation for they shape the way a nation’s economy operates. There are three major types of economic systems, namely: A planned economy which operates at the sheer instructions of the Government; Market Economy has complete independence in its operations and is at the disposal of the market forces of demand and supply, Mixed Economy is an amalgamation of features from both the previously mentioned economic systems and therefore has economy operating tools which are shared by the private sector and the public sector, hence it could be regarded as a balanced mixture of the political ideologies of capitalism and socialism (Schlesinger, 1962). A mixed economy is an intricate and co...
6 Pages(1500 words)Coursework
sponsored ads
Save Your Time for More Important Things
Let us write or edit the coursework on your topic "How Do Tariffs Affect Different Sectors of an Economy" with a personal 20% discount.
GRAB THE BEST PAPER

Let us find you another Coursework on topic How Do Tariffs Affect Different Sectors of an Economy for FREE!