Comments (0)
Add to wishlistDelete from wishlist
Cite this document
Summary
The article, ‘Privatization and Economic Growth in Developing Countries’ were aimed at the many possibilities that rises out of the privatization of certain government services in developing countries and how it could steer the wider developing country’s economy to be more efficient and stabilized…
Download full paperFile format: .doc, available for editing
HIDE THIS PAPERGRAB THE BEST PAPER94% of users find it useful 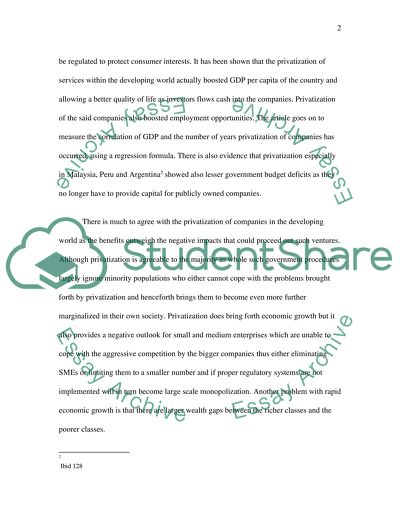 economy to be more efficient and stabilized. Both the authors argue that there are many

correlated according to the development of the country. All of the studies quoted by the


The authors argue citing different sources that the privatization of government

are more likely to be capital constrained due to the lack of investors1. The authors

the quality of work is not up to par as is the case in privately owned companies.

as a better range of work quality among employees. It is also a known fact that

companies to provide better services and products to attract their customers. However, it

be regulated to protect consumer interests. It has been shown that the privatization of

allowing a better quality of life as investors flows cash into the companies. Privatization

of the said companies also boosted employment opportunities. The article goes on to

occurred, using a regression formula. There is also evidence that privatization especially

in Malaysia, Peru and Argentina2 showed also lesser government budget deficits as they

no longer have to provide capital for publicly owned companies.

world as the benefits outweigh the negative impacts that could proceed out such ventures.

marginalized in their own society. Privatization does bring forth economic growth but it

implemented will in turn become large scale monopolization. Another problem with rapid


In conclusion, although there are negative effects of economic growth and the

Cook, Paul, and Uchida, Uichiro 'Privatisation and Economic Growth in

...﻿ Economic growth and convergence in poor countries Introduction In the modern world globalization brought to developing countries new definitions aswell as new opportunities. In the countries with developed market economy the consumer’s preference is the main moving force of creative process. The needs of people are complicated and different – these are physiological needs of food, security, clothes etc, social needs of influence, emotional intimacy and affection, and personal needs of knowledge and self-expression. They are not shaped artificially, they derive from human nature. If the needs are not satisfied, the person feels himself unhappy and disappointed. Unsatisfied person may choose one of two alternatives – he either looks...
21 Pages(5250 words)Dissertation

... enterprises which were running in loss. Thus India was able to reduce the investments or activities in nonproductive sectors and concentrated more on the productive sectors as part of the economic reformation process undertaken. “The economic reforms or liberalization in India mark a shift from socialist economy to a market economy”(Bisani, 2009). Thus, multinational companies are currently investing heavily in India as result of the better economic and political climate. On the other hand, Pakistan is struggling to attract foreign direct investments because of the political unrest and increase in terrorist activities in Pak soil. Conclusions The growth of economy, education and politics in a developing country is heavily dependent...
5 Pages(1250 words)Research Paper

... for the country economic intervention, distribution of wealth and income, the direction and level of economic transfers as well as the level and structure of the economic activities in the country as shown in the above illustration diagrams. Reference: Arrests, P, & Sawyer, M, 2002, “Monetary policies in the Euro system and alternatives for full employment: Manuscript. McKinley, T, 2001, “Introduction in Macroeconomic policy, growth and Poverty reduction” London: Palgrave....
3 Pages(750 words)Coursework

Growth and development in Developing countries

...?Growth and Development in Nigeria amid Economic Challenges Growth and Development in Nigeria amid Economic Challenges IntroductionThere is a paradox surrounding the state of growth and development in Nigeria. Diverse sectors in Nigeria register growth yet the level of development remains stagnant. However, of great concern is the notion that as other parts of the world faced the economic downturn, Nigeria was not spared. The country boasts of very rich economic development opportunities in oil industry and agriculture sector among others. Indeed, the country’s economy has experienced challenges since 1980’s. It is admissible that the current economic situation appears even more uncertain. The Government has repeatedly stated...
3 Pages(750 words)Research Proposal

The Economic Growth of Developing Countries

...﻿The WTO has benefited the economic growth of developing countries by enabling them to engage free trade World Trade Organization (WTO) has a profound impact on trade relations and cooperation between states on the global level. For the most part, WTO has played a greater role in economic forums than security or political ones, and in particular has promoted the free trade process. Given countries’ poor provision of natural resources and industry's need for significant overseas markets, the rationale for such advocacy is not difficult to discern. Initially, developed countries utilized WTO in many ways as an 'international public good' which would allow it to enjoy the benefits of greater international market access without necessarily...
9 Pages(2250 words)Assignment

They are also countries that facing problems of environmental issues, health, education, housing and many sectors of underdevelopment.
A developing nation, is that nation that have low standard of living, especially in the Economic, Political and social basis. A country where its people are getting low income, witnessing inflation, poverty and other features can be refer to as Developing nation. These countries can also be called 'Underdeveloped'.
An Economist (Gerard Chaliand) who wrote on Developing countries, where he defines what all about developing nations and their features states that "The economically underdeveloped countries of Asia, Africa, Oceania, and Latin America, considered as an entity with common charac...
9 Pages(2250 words)Essay

The economic growth of Singapore is not that strong and sustaining. This is because, Singapore’s population is growing at a slow rate that the current economic plan cannot sustain. The available productive population is not enough to produce goods and services that can support the large old and unproductive population. More to that is Singapore had is limited in terms of land availability and has limited supply of water. This makes it hard to sustain its economy as a lot revenue earned is spend in purchasing this resources rather than developing the economy of that nation (Abeysinghe & Choy, 7). However, it has to be concluded that, though Singapore’s economic growth has not attained a level in which it can be referred to us stro...
8 Pages(2000 words)Essay

This case shall be compared to Sub-Saharan Africa since it has a record of failed and poor development of the economy.
Governance and democracy are two different aspects in a country3. Governance is the act of leading people in an accountable way. The way leaders conduct their roles, as per their capacity leads to an even economic distribution for all the individuals across a country. The two factors, governance, and democracy, can have a huge implication in political and economic state of a country4. In this case, the political aspect is considered because it is a fundamental element for economic development in any country. From the World Bank point of view, governance is the way power is applied to the social and economic...
7 Pages(1750 words)Essay

The Economic Growth of Developing Countries

...﻿The Economic Growth of Developing Countries World Trade Organization (WTO) has a profound impact on trade relations and cooperation between states on the global level. For the most part, WTO has played a greater role in economic forums than security or political ones, and in particular has promoted the free trade process. Given countries’ poor provision of natural resources and industry's need for significant overseas markets, the rationale for such advocacy is not difficult to discern. Initially, developed countries utilized WTO in many ways as an 'international public good' which would allow it to enjoy the benefits of greater international market access without necessarily having to make a significant contribution itself. This initial...
10 Pages(2500 words)Essay
sponsored ads
Save Your Time for More Important Things
Let us write or edit the book report/review on your topic "Privatization & Economic Growth in Developing Countries by Paul Cook and Uichiro Uchida" with a personal 20% discount.
GRAB THE BEST PAPER

Let us find you another Book Report/Review on topic Privatization & Economic Growth in Developing Countries by Paul Cook and Uichiro Uchida for FREE!