The Best of Microeconomics - Assignment Example

Comments (0)
Add to wishlistDelete from wishlist
Cite this document
Summary
The paper "The Best of Microeconomics" describes that a big change in price has reduced the quantity be only a small amount and how revenue has increased as results. The knowledge of price elasticity is hence essential for producers while making pricing decisions to maximize their revenues…
Download full paperFile format: .doc, available for editing
HIDE THIS PAPERGRAB THE BEST PAPER96.9% of users find it useful 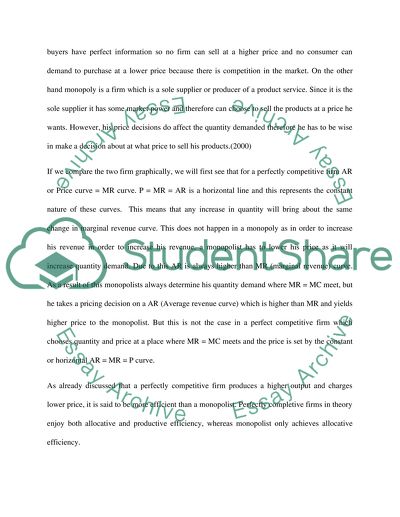 Extract of sample "The Best of Microeconomics"

Download file to see previous pages A perfectly competitive firm is that market structure where all the firms in the industry are producing homogenous goods and selling it the same price. All of these sellers and buyers have perfect information so no firm can sell at a higher price and no consumer can demand to purchase at a lower price because there is competition in the market. On the other hand, a monopoly is a firm which is a sole supplier or producer of product service. Since it is the sole supplier it has some market power and therefore can choose to sell the products at a price he wants. However, his price decisions do affect the quantity demanded, therefore, he has to be wise to make a decision about at what price to sell his products. (2000)
If we compare the two firm graphically, we will first see that for a perfectly competitive firm AR or Price curve = MR curve. P = MR = AR is a horizontal line and this represents the constant nature of these curves. This means that any increase in quantity will bring about the same change in the marginal revenue curve. This does not happen in a monopoly as in order to increase his revenue, a monopolist has to lower his price as it will increase quantity demand. Due to this AR is always higher than MR (marginal revenue) curve. As a result of this monopolists always determine his quantity demand where MR = MC meet, but he takes a pricing decision on an AR (Average revenue curve) which is higher than MR and yields higher price to the monopolist. But this is not the case in a perfectly competitive firm which chooses quantity and price at a place where MR = MC meets and the price is set by the constant or horizontal AR = MR = P curve.
As already discussed that a perfectly competitive firm produces a higher output and charges lower price, it is said to be more efficient than a monopolist. Perfectly completive firms, in theory, enjoy both allocative and productive efficiency, whereas monopolist only achieves allocative efficiency.
In the real world also we can apply this model, but the results provided by these models will not be similar as provided by these theoretical models. For example, De Beers is a monopoly who owns large diamond reserves and despite low diamond shovelling costs, they can sell it for millions of dollar. This is how a monopolist exploits consumers. Similarly, we all know that Petrol Pump exists in a competitive industry and despite high costs associated with oil refining, they usually have to sell petrol at a margin of just a few cents. In this way, the theoretical model looks right but consider the example of how Wal-Mart existence in the form of a monopoly has provided consumers with lower-priced goods as compared to perfectly competitive industry of local general stores. This proves the theoretical model wrong.
The other types of market structures that exist are oligopolies, duopolies, monopolistic competitive firms and cartels. These models are much realistic to the model discussed above.
3) The concept of elasticity is the measure of the responsiveness of change in quantity demanded, following a change in price.  ...Download file to see next pagesRead More
Share:
Tags
Cite this document
(Microeconomics: output Assignment Example | Topics and Well Written Essays - 1750 words, n.d.)
Microeconomics: output Assignment Example | Topics and Well Written Essays - 1750 words. https://studentshare.org/macro-microeconomics/1503189-microeconomics-output
(Microeconomics: Output Assignment Example | Topics and Well Written Essays - 1750 Words)
Microeconomics: Output Assignment Example | Topics and Well Written Essays - 1750 Words. https://studentshare.org/macro-microeconomics/1503189-microeconomics-output.
“Microeconomics: Output Assignment Example | Topics and Well Written Essays - 1750 Words”. https://studentshare.org/macro-microeconomics/1503189-microeconomics-output.
Comments (0)
Click to create a comment or rate a document

CHECK THESE SAMPLES OF The Best of Microeconomics

The Peculiarities of Microeconomics

The Principles and Motivating Force of Microeconomics

The Impacts of Organizational Behavior on the Employee Output, Motivation and Attitude

12 Pages(3000 words)Case Study
sponsored ads
Save Your Time for More Important Things
Let us write or edit the assignment on your topic "The Best of Microeconomics" with a personal 20% discount.
GRAB THE BEST PAPER

Let us find you another Assignment on topic The Best of Microeconomics for FREE!