Comments (0)
Add to wishlistDelete from wishlist
Cite this document
Summary
Emerging markets are indeed becoming points of focal call for most global expansion agenda for various multinational companies. This is largely due to the potentials that each of them uniquely possess. A major component of emerging markets is the four BRIC emerging markets represented by Brazil, Russia, India and China…
Download full paperFile format: .doc, available for editing
HIDE THIS PAPERGRAB THE BEST PAPER95.8% of users find it useful 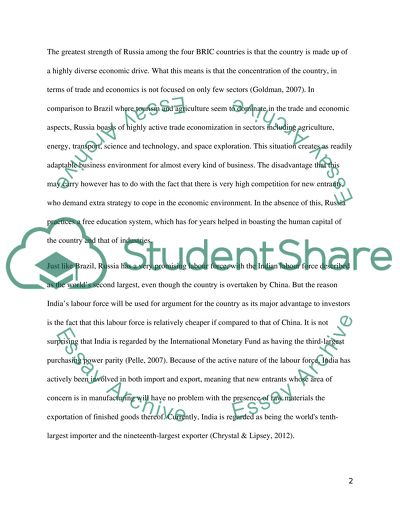 Download file to see previous pages Emerging markets are indeed becoming points of focal call for most global expansion agenda for various multinational companies. This is largely due to the potentials that each of them uniquely possess. A major component of emerging markets is the four BRIC emerging markets represented by Brazil, Russia, India and China. This paper identifies the unique properties of each of the markets and makes a conclusion on the two most viable for any investor seeking to undertake massive business expansion to an emerging market. Coincidentally, each of the four BRIC countries is heavily populated with population running beyond 100 million people. However, for Brazil, it is not just a matter of heavy population but a highly strategic population concentration that serves as major advantage for investors. In the first place, Insch & Steensma (2006) admires the kind of population concentration in Southeastern and Northeastern regions, which are made up 79.8 million inhabitants and 53.5 million inhabitants respectively. Because of the population concentration, most of the vibrant economic activities take place in these two regions. For new entrants, the advantage this offers is that proximity will not be a challenge. Distribution channel also becomes more focused and less expensive. What is more, the population in the two economic regions has a near 100% literacy, which means that skilled labour is abundant in Brazil (Khanna, Pallepu & Sinha, 2005). All in all, cost of starting business in Brazil is cheaper because several expenses such as transportation, distribution, and labour are cut down significantly with government supporting with several trade incentives. The greatest strength of Russia among the four BRIC countries is that the country is made up of a highly diverse economic drive. What this means is that the concentration of the country, in terms of trade and economics is not focused on only few sectors (Goldman, 2007). In comparison to Brazil where tourism and agriculture seem to dominate in the trade and economic aspects, Russia boasts of highly active trade economization in sectors including agriculture, energy, transport, science and technology, and space exploration. This situation creates as readily adaptable business environment for almost every kind of business. The disadvantage that this may carry however has to do with the fact that there is very high competition for new entrants, who demand extra strategy to cope in the economic environment. In the absence of this, Russia practices a free education system, which has for years helped in boasting the human capital of the country and that of industries. Just like Brazil, Russia has a very promising labour force, with the Indian labour force described as the world’s second largest, even though the country is overtaken by China. But the reason India’s labour force will be used for argument for the country as its major advantage to investors is the fact that this labour force is relatively cheaper if compared to that of China. It is not surprising that India is regarded by the International Monetary Fund as having the third-largest purchasing power parity (Pelle, 2007). Because of the active nature of the labour force, India has actively been involved in both import and export, meaning that new entrants whose area of concern is in manufacturing will have no problem with the presence of raw materials the exportation of finished goods thereof. Currently, India is regarded as being the world's tenth-largest importer and the nineteenth-largest exporter (Chrystal & Lipsey, 2012). China on the other hand seem to have a part of all the advantages that each of the other countries bear. But for investors whose focus is active manufacturing that focused around science and technology, China will be the most prudent destination (Hitt & He, 2008). This is because the country has over the years taken up science and techn ...Download file to see next pagesRead More
Share:
Tags
Cite this document
(“Comparison of the four bric emerging markets. Brazil, Russia, India Assignment”, n.d.)
Retrieved from https://studentshare.org/macro-microeconomics/1498454-comparison-of-the-four-bric-emerging-markets-brazil-russia-india-and-china
(Comparison of the Four Bric Emerging Markets. Brazil, Russia, India Assignment)
https://studentshare.org/macro-microeconomics/1498454-comparison-of-the-four-bric-emerging-markets-brazil-russia-india-and-china.
“Comparison of the Four Bric Emerging Markets. Brazil, Russia, India Assignment”, n.d. https://studentshare.org/macro-microeconomics/1498454-comparison-of-the-four-bric-emerging-markets-brazil-russia-india-and-china.
Comments (0)
Click to create a comment or rate a document

CHECK THESE SAMPLES OF Comparison of the four bric emerging markets. Brazil, Russia, India and China

...Juvenile Delinquency and Education Introduction and ment of the Problem The question of juvenile misbehaviour and crime was not taken seriously until modern times. It was till the eighteenth century that children were regarded as non persons. They were neither recognized nor received any special treatment from either the state or society. The concept of discipline was at most a violent treatment of reinforcing specific norms acceptable in society. Perhaps a reason for that was that child mortality rates were high. It was not considered feasible to form attachments with children. They were left up to nature and the survival of the fittest approach. However, at the end of the eighteenth century, the age of “The Enlightenment... Delinquency and ...
6 Pages(1500 words)Research Proposal
sponsored ads
Save Your Time for More Important Things
Let us write or edit the assignment on your topic "Comparison of the four bric emerging markets. Brazil, Russia, India and China" with a personal 20% discount.
GRAB THE BEST PAPER

Let us find you another Assignment on topic Comparison of the four bric emerging markets. Brazil, Russia, India and China for FREE!