Comments (0)
Add to wishlist Delete from wishlist
Cite this document
Summary
The researcher of the paper "Institutional Factors in Economic Policy Change: a Case of Germany and U.K." aims to demonstrate the difference that is outlined in the way and the manner in which different political parties deploy fiscal and monetary policies…
Download full paper File format: .doc, available for editing
HIDE THIS PAPERGRAB THE BEST PAPER91.5% of users find it useful 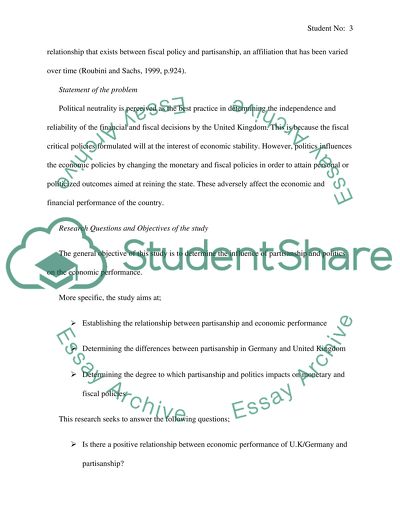 Extract of sample "Institutional Factors in Economic Policy Change: a Case of Germany and U.K"

CHECK THESE SAMPLES OF Institutional Factors in Economic Policy Change: a Case of Germany and U.K

The first, when Sam Slime mugs you outright is a matter for governmental law and order. Cleary there is a criminal (Sam) and a victim (you). In the second scenario the government, in the guise of a benevolent company decides to rehabilitate Sam and gives him your hard-earned money through further taxation, another kind of economic stimulus perhaps. In this case when you resist, as you would have in the first case, you are the criminal because this master says that you have to pay and suddenly you are on the wrong side of justice. But, how can this be if the laws of the land are written to explicitly prohibit this kind of injustice? In these two cases, stealing is occurring and there is no difference whether it is through the gover...
8 Pages (2000 words) Coursework

... up of EU and the functioning of EUs institutions and policies and the satisfactory continuation of the EUs growth. The enlargement is an ongoing process. EU is now handling the cases of prospective members. In this context, the situation and prospectus of the candidature of Turkey is entirely different. This is the most toughest one the EU has ever faced and it is still under consideration. It is the biggest country to apply for membership and some member states have serious reservations about its candidature being ever accepted. Cyprus question is the main cause of dispute and puts a mark on the candidature of Turkey. The accession negotiations began in 2005 and it still continues. Many members put forth the argument—granted Turkey...
9 Pages (2250 words) Case Study

While each force of globalization is important, the technological revolution has impacted the business models, value creation and differentiation (Spelman, 2010). The cloud computing technologies that have made the popular social networking applications possible are now being applied to development, healthcare, and society. Today mobile telephones are more like powerful computers that take care of many of the societal challenges facing both developed and developing countries (Evans, 2010). In Chile, new software enables weather information to farmers who can now make informed decisions on when and how to sow or harvest the crops. However, the fear or ignorance of cloud computing technology could harm the chances of the SMEs becomi...
7 Pages (1750 words) Coursework

...Climate change Can we imagine an Earth where there are no green mountains, no deep blue seas and no living creatures? No. But a disaster of such magnitude and dimension is looming over Earth. Humans have identified this threat, defined it and given it a name, global warming. This dangerous proposition is based on the truth that even a 5 % increase in the surface temperature on Earth can wipe out life from this beautiful planet. And the temperature is increasing as never before. It was in 1990s that the world began to hear serious warnings on global warming and climate change. The summary for policy makers prepared as part of the first assessment report by Inter-governmental Panel on Climate Change was the first ever in depth study...
6 Pages (1500 words) Literature review

...1. Assess the key macro factors that have influenced the UK grocery retailing industry since the early 1960s. The concept of organisational change is inherently intertwined with external threats and opportunities, which businesses must adapt to as part of strategic planning to continue long term growth. Senior and Fleming argue that the concept of organisational change has many faces, namely “convergent changes and transformational change that is organisation wide and characterised by radical shifts in strategy, mission values and associated changes of structures and systems” (In Thompson & Martin, 2005, p.41). Moreover, Johnson et al highlight that external macro-economic factors intrinsically impact strategy management and without...
13 Pages (3250 words) Assignment
sponsored ads
Save Your Time for More Important Things
Let us write or edit the research paper on your topic "Institutional Factors in Economic Policy Change: a Case of Germany and U.K" with a personal 20% discount.
GRAB THE BEST PAPER

Let us find you another Research Paper on topic Institutional Factors in Economic Policy Change: a Case of Germany and U.K for FREE!